Hey there gang. So the update is taking a little longer than I had expected. I am working full days on it and it's coming along nicely but a lot of the things I am working on in this update are very time consuming.

For instance, I have been reformatting any instances you receive loot in the game. The change I am making here is a minor one but looks better imo. What I didn't expect is to be 2 days into the rework and still have at least a day to go before it is done. Btw, I consider a day of work to be around 10 hours or more.

I am getting pretty excited to release the update now as I see the end of it in sight. I will still need to do a full test run through and have some more areas that need finishing up but I think if I stay at this rate the update should be out in 4 or 5 days.

Thank you all for taking a look and sticking with me. Wish you all the best and I will talk to you soon, take care.

That's very exciting news. 4 to 5 days? I can hardly wait to experience it. I always admire how hard and fast you work.

MMMm said:
That's very exciting news. 4 to 5 days? I can hardly wait to experience it. I always admire how hard and fast you work.
Click to expand...

Big thanks @MMMm I wish it was out sooner though. There were too many days since the last update, I wasn't able to work on the game. as much as I am now able to so going forward there should be a fairly consistent update rate.

Oh yeah that Merikh fight. It turns out I did have a way that she lives in the last update. We had talked about it and I looked thought the events but didn't find it so I figured I must have imagined making it but I found the condition in the troop events themselves. Turns out you just needed to make the battle take a certain amount of turns, you must have been killing her too fast. Maybe she needs a little buffing. Anyways I noticed this when I went to go add it the other day and thought I'd let ya know.

You have a good one bud, talk to you later.

Jeremiah Eastman said:
Turns out you just needed to make the battle take a certain amount of turns, you must have been killing her too fast.
Click to expand...

Ah, I see. Is there a way to end that encounter without anyone dying?

MMMm said:
Ah, I see. Is there a way to end that encounter without anyone dying?
Click to expand...

Not currently, when she survives she kills the two other girls on her way out. So you have to, unknowingly, choose who survives.

I am super excited for the new update, you always make them count!

Biestmann said:
I am super excited for the new update, you always make them count!
Click to expand...

Big thanks @Biestmann, I can't wait to get it out so I can play through your new update.

Well it was a rough and sleepless 5 days but I have the update ready to go. There is a lot of new content in this one and a good deal of content submitted from community member @MMMm.

I hope you all like the new version and thanks for stopping by.

High Pass areas are located off of High Pass Gate.​
A new Lanista area has popped up off of Tiber Lake.​
A new section is being opened up off of the Ludus through Tasks.​
Testing Zone has gone through some upgrades.

Made many improvements to existing zones.

Shadows have been upgraded.

Graphics have been improved.

Now all, non Arena fights, have an "Ultra Rare" drop that you will likely never see.​
Bucklers are now craftable as intended.

Stat upgrade items have been turned into Tomes with brand new icons.

Improved the descriptions on most pieces of gear to better show how it affects the recruit.

No more chance of having 0 Augment slots on gear.

Improved the description on the Rudis.

Added a "Dire" version of the Collar and Guard.

The Heavy Bandanna can now be crafted normally.

Removed the Record of Names from the Arena stat prize pool.

Togglable in the settings section.​

Incapacitate and Perma Injuries now only apply from a Critical hit.

Chance raised to 5% from 1%.​
Hoplomachi's guard skill has been changed to Bulwark.

Bulwark: guards and adds a 5% damage mitigation for 3 turns.​

Lots of new Icons. Many of which I just created.

Very difficult.​
Found in the open, they will chase you.​
Croc gear recipes added when you kill your first one.​
Optimized a lot of scripting. Reduced Parallel Process to almost nothing.

Renamed Front Row to Static Row and Back Row to Dynamic Row.

This is to better describe how a player should look at the rows.​
Static Row is anchored in the center of the battle taking the brunt of the damage.​
Dynamic Row is for the mobile. Dart around the outside of the battle to help stay safe.​
New method of Damage display which improves the feel of battles.

Made some fine tuning adjustments to all Styles stat growth.

Scholar type added. This is in the early stages but will be much more developed in the future.​
Added a lot of hidden flavor text.

Updated the Basic Info section with the new information.

You can now use your keys if using a keyboard to name things.

All instances of items now show the Icon before the name to help visually identify the item.​
Completed some missing story lines.

Lucciea now shows up in the jail cell when captured.

Made many improvements to the Style descriptions.

Easier to see what unique abilities Styles have.​
Reduced the agro range of Lanista Guards.

Fixed a pathing issue in the Lower Flatts.

Fixed a possible lock up in Lower Flatts.

Fixed NPC's that would walk in place.

Took many more steps to eradicate the 0 HP bug.

Fixed an issue with how Lions scaled.

Fixed a rare cause of a seemingly random crash.

Bravo! I already downloaded the new version and am excited to dive in!

Biestmann said:
Bravo! I already downloaded the new version and am excited to dive in!
Click to expand...

Wow big thanks @Biestmann I am taking a little break today, as long as no hotfix is needed. My plan then for tomorrow is to play through your game. I have really been looking forward to checking out the new update. Your game is really the gold standard of games in development. I hope you like the new update and it gives you no trouble.

@MMMm has found some nice bugs in the new update including some missing spirtes which cause the game to lock up. I am releasing a hotfix to fix everything the he found. I'm very sorry if you already got the broken version.

Removed the lock on Bonds. Change them now as you see fit.

Fixed a cause of a random crash in battle.

Fixed some interaction between Bounty Board Tasks.

Lucciea now wanders her cell so she can conversate.

The Taskmaster now has the proper corpse image.

You can no longer loot through the bars in Lanista's House.

Fixed Larks recruitment and made improvements to the event.

nice. i'll check it out soon

Hey bud great to see ya. Thanks for droppin by, I hope all is well. 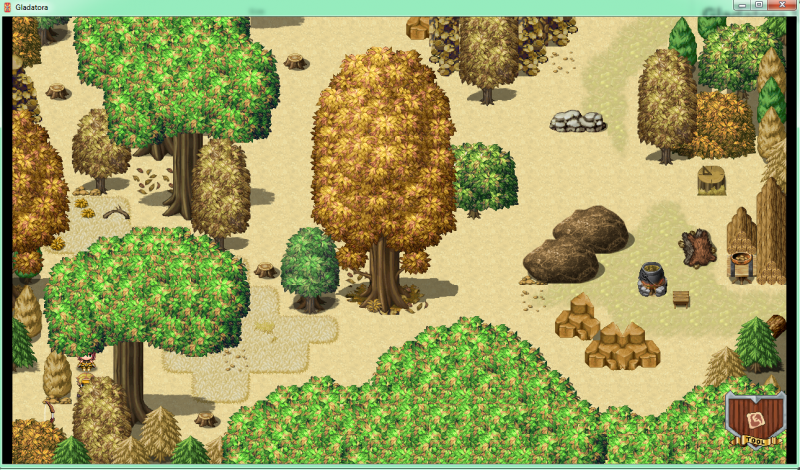 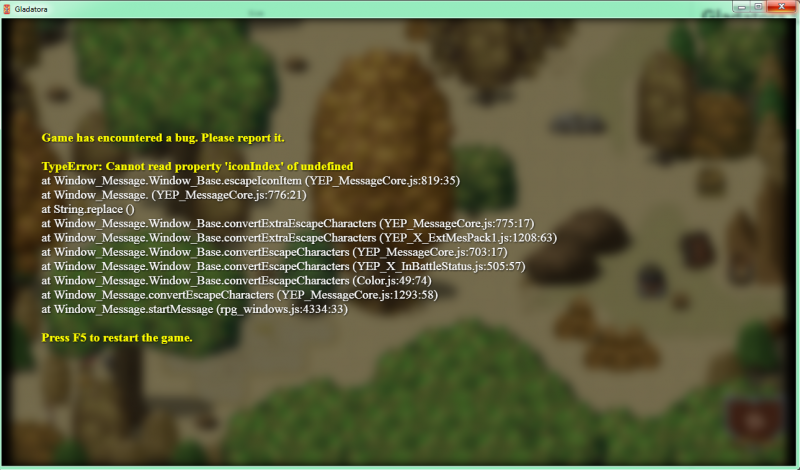 a little bug I found trying to interact with the bow.

Drago9 said:
a little bug I found trying to interact with the bow.
Click to expand...

Dang sorry about that bud. I had an i where a w needed to be in its code. I just hope that's the only one of those. This last big update I changed 1000s of instances where items and gear were given out. I tried to be very careful about each one but I over looked that bow so there could be more. Thanks for letting me know about that one.

Hey gang I have a new update uploaded. I am currently recovering from the worst sickness I have ever experienced. So I will keep this short. I'm still pretty out of it so I hope this all makes sense.

This update fixes many long standing issues as well as adds some new content like the new scholar/library system and the beginning Ally Tasks. There is also a lot of general polish being added to prepare for the upcoming beta version.

Hope you get well soon my dude

Drago9 said:
Hope you get well soon my dude
Click to expand...

Thanks much bud, I'm getting there but it's really hanging on. I have some sort of a lung infection I am working through but everything else is good. How have you been? Hope all has been well and I'll talk to ya later have a good one.
You must log in or register to reply here.
Share:
Facebook Twitter Reddit Pinterest Tumblr WhatsApp Email Link

TheoAllen
Me: "Finally finished most of my game backlog. Probably time to do some gamedev" | Steam: *offer sales*
39 minutes ago •••