Alexander Hawksmoor said:
Hey sorry I missed the post about you losing so much progress, but Im really glad to see you back up and running. I understand the frustration of having massive set backs, it stinks so much, but good job getting things back on track and hope things go smoothly for you.
Click to expand...

Big thanks to you Alexander. It was pretty unfortunate but I am finally past the point I was at when the crash occurred. It feels good to be making progression again rather than redoing so much work I had already done. Btw I am a big fan of Dawn of Orion. I know you have had some rough set backs as well but have pushed through and have an amazing game on your hands. That's one of the games I keep a close eye on.

Hey there gang, I just finished up the last bits of the new version of Gladatora and I'm releasing it today. I'll post the update log below. There a lot of new things and fixes, the 3rd wave of Lower Flatts content has also been added. I didn't break all of those additions down as there were too many and I think it would be more fun for the player to find them without being told. Thanks for taking a look and please let me know if you find any issues.

Congrats on the update! Glad you got all those pesky double spaces.

Thanks MMMm. So am I. I ended up spending a full day going through every line of text in the game looking for the double spaces. I can't believe how much time that took hehe but it was definitely worth it. I haven't got all of your content in just yet but I got another big chunk added. The Bandits Hold zone is where most of the missing content will be added at this point. Forty took me a good day and a half of solid work to get done as well, I thought he would be a quick easy recruit, nope hehe. I love him though, he is a great addition.

Edit:
@MMMm has discovered some issues, a couple that needed immediate repair. I just posted version 1.8.8b of Gladatora to hotfix the issues. I'll post an update log below.

Hey there gang, just a little dev update. I have had some serious family issues to deal with as of late, from helping family in the eruption area of the Hawaiian volcano to some other, closer to home issues. Because of all of this I have not had much time to work on Gladatora but I see an end in sight and I will be back at it very soon. I hope fans of my game understand and stick with it, I have not lost any interest in working on my game and in fact feel this time away is only helping to reinforce how much I love working on it and can not wait to get back into production. Thanks for taking a look and I wish you all the best.

Hope you sort your stuff out soon

Wish you the best of luck. It's a great project and I hope you get to finish.

Yeah, this game is super sweet.

A tip for the early game is to immediately go and recruit Nine, Poryg, Ecko and Brood. They have useful weapons that you can equip your party with. Vendi has a special ability that doubles his attack and speed when he's at full health, so he's great to have on your side and he's free to recruit.

There's a system called Bonds which causes characters who have been in a certain amount of battles to put a copy of their unique ability into your inventory, so you can equip it to another character. Starah and Triggand have powerful abilities that you can swap between the two because of their bonds that gives them excellent defenses. I like Brannus because he has a critical hit bonus and there's weapons that the Flatt bosses drop which have higher critical hit rates. Using a technique that hits 4 times with a 30% critical hit rate with doubled strength can be deadly and very effective.

The Mud Flatts have a variety of bandit encounters that you can grind up on to earn JP. The Myrmillo class has some good abilities, so I usually turn everyone into one of those, but keep someone as a Pugilist for their status effects. You can afford a Fame ability after roughly 10-13 random battles, which does some excellent damage.


The weapon skills you obtain are pretty good too and the Myrmillo's guard ability gives your party extra points so they can use these skills more often. After a certain amount of JP has been earned, your characters can unlock prestige classes, which are usually stronger and have better equipment options.

Hey there all, I am officially back and have been hard at work developing the game. Life is back to normal for me so I can once again dedicate most of my time to making this project the best it can be. I am currently in a final testing phase, if all goes well, and will have the new update out withing the next couple days. This is a very big update compared to many previous ones. There are lots of improvements, new content and bug fixes. I am really excited about the new path the game is on and I think it will be something pretty good in the long run.

I want to give a special thanks to the Gladatora testers and fans that have stuck with the game, through some difficult times in my life. It is humbling to see that those of you would hold interest as you have. Before I go I would like to leave everyone with a great bit of fan art @MMMm
was able to get a great deviant artist to create. I am truly honored someone would do this for my game and really wanted to share the work with you all.

Big thanks to everyone and I will have that new update out soon. As for now here is the great fan art of the long lost sisters Starah and Brigit, by the artist. Kakaa4 at https://www.deviantart.com/kakaa4/gallery/ 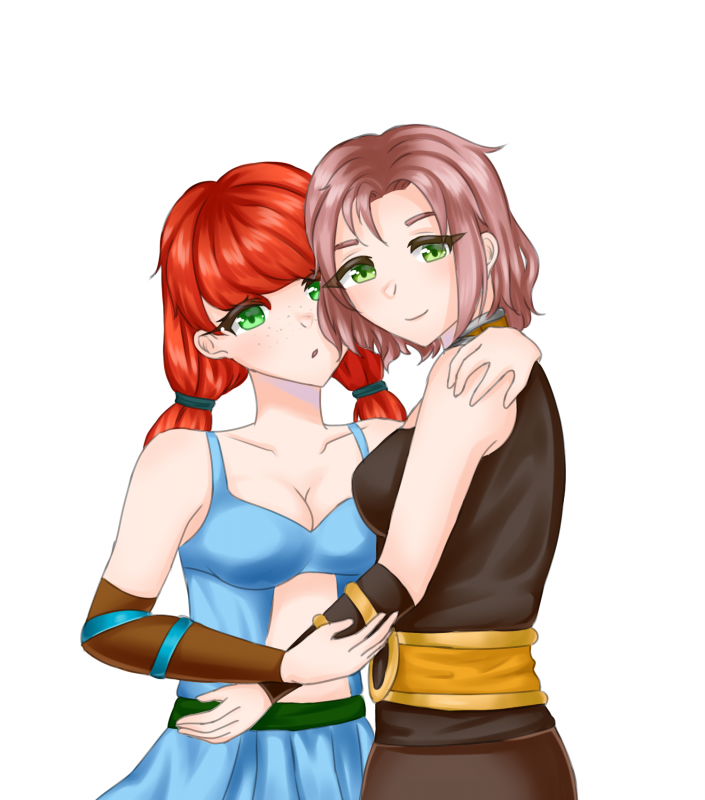 Update Day! Version 1.9 Alpha is finally out after quite a bit of development. The game will be moving into an official beta state soon. All of the core systems are finally just about where I had envisioned them and I couldn't be happier.

I also am posting a new Gladatora play through series that Hypnojo Gaming has kicked off today! @Hypnojo Gaming, he will be posting his play through videos regularly of 1.9 game play. He's a new Youtuber trying to make it so please show him some love.

The Changelog is a pretty big one this time, here is a list of the main changes.

And it's neat that Hypnojo's doing a playthrough. I'll give it a watch.

Big thank you and I am sure Hypnojo will appreciate it. It would have been out sooner but I kept uncovering new issues from the rpg maker upgrade. Everything seems to look pretty good now but knowing you, if you play it you will find some hidden bugs. I also have 2 of your new recruits added, Lucciea and Mary. Thanks again for submitting them and soooo sorry it took so long to get them in.

I'm releasing a hotfix to take care of some issues and add a little more content as well. There was a game breaking item duplication glitch that required immediate fixing. Big thanks to @MMMm for finding these issues.

Bug found: I'm stuck here. Also, I can't use map to get back?

I suspect you can't teleport anymore because there's a boat you can obtain that you'd be able to leave stuck on an island somewhere forever.

Maybe there could be a paid service to cause the boat to be retrieved and placed on the Tiber Lake docks. I kinda miss being able to teleport back to base.

Hmm you should be able to get out of that using the map not sure why that wouldn't work. As for the boat getting stuck or lost you can pay the girl at the main docks to bring the boat back if you lose it.

Very sorry about that bug I could have sworn I got all those places fixed but guess I missed that one. Big thanks for letting me know. So today when I got up my monitor wouldn't turn on. It just died out of no where. Being broke and disabled I currently have no idea how I can get another tv. So I can't fix this just yet unfortunately. I am going to do what I can but no idea how long this will set me back. Always something.

well best of luck to you. I wasn't far into it yet so I can just restart a new file. I'll scout for more bugs for you.

Yeah I can't use Map for some reason.

Heya, @Drago9 Big thanks bud. As for the map you have to use that from the tool icon on the regular map. I am pretty sure it won't work from the inventory like that. I'm borrowing a tv for a little bit today so I'll sneak a ninja fix in for that passability issue later but it won't be a new version.