So in returning to WinJS to test changes with regard to possible performance fixes I ran into a bill reference issue with the core graphics canvas, which makes me wonder if anyone had similar issues with similar interfaces for MV projects. Specifically, the following code is causing a null reference issue:


JavaScript:
Any idea on what's happening?

If it's similar to what I'm thinking, I think sometimes it happens because you have an out-of-date plugin, or because you're using newer plugins with an older core.

In the case of WinJS it happens during the Visual Studio phase of the debug process. The code block I posted is where the exception break occurs during runtime execution. As for plugins, the only thing I can think of is the PIXI filters (for which I do have a backup option, although it is not going to be anywhere near as clean for what I have in mind).

EDIT: Turns out I wasn't actively using the PIXI filters at all, and the weird thing is that none of this actually happens in NW.JS. Here's the point where it occurs though, in case it helps: 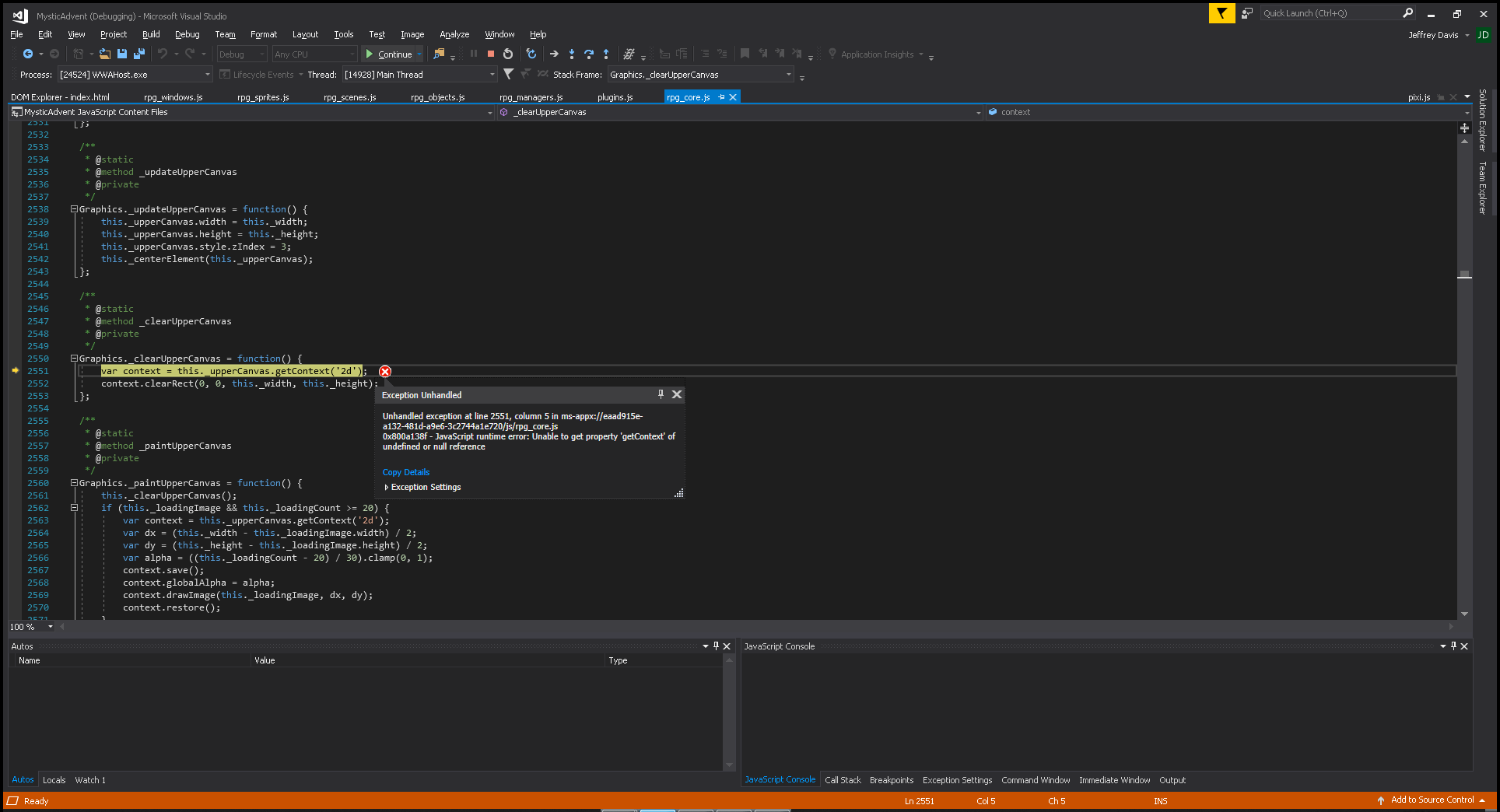 Also, the plugins.js is modified for the purposes of using Visual Studio for this as certain plugins don't work in this deployment setup and I had to edit a number of them out anyway. And in case it helps, I've also been using 1.6.1 for my core. I can list the plugins* that are used specifically for this version in case it helps:

* Since the lists are different between NW.JS and Visual Studio, I opted to list them in list form rather than screenshots.
** Yanfly plugins now require payment to use, so any troubleshooting that involve these will require the signature of an NDA statement.
*** This is actually the chain command plugin. That's because there's a hidden use of the secret trick from Contra (and you probably know what I'm talking about).
**** This is also a paid plugin (which I have developed with assistance and released for use by others). Obviously this will also require an NDA statement.
Last edited: Feb 20, 2020

I figured out what happened, so excuse the double-post. Turns out that it was the absence of a specific file (actually it was the entire pixi.js set) that I accidentally removed while cleaning out irrelevant and unnecessary material for the platform target. Copied it over from a matching project for the core version and everything is back to normal again.