I've been playing around with some design changes and have decided to include a function where sometimes you have a goal that you can't reach or even finish without assistance (only a certain caste of service is allowed access to where your next objective is waiting, or maybe they have the access codes needed to shut down an out-of-control defensive artillery that's been turned against its own guard) and as a result of this you have to find somebody who hopefully survived a brush with fate (and has the access codes you need). In exchange you are afforded backup for as long as it takes to get the access you need (or stop the malfunctioning battle system from even firing its load) however they should otherwise be considered as an NPC and therefore shouldn't be targeted during battle even though he or she will appear in the battle line to accommodate the limits of working with MV (for which I'm using the Yanfly party system to define and lock the assistant' NPC's position in the battle line). At the same time I don't want to have the NPC absorb damage either (even if it would otherwise go to an actual party member.

In short, this is what my intended setup requires:
Any ideas?

www.yanfly.moe
3 you can do with

www.yanfly.moe
and making it unselectable, to have it game over when everyone else is dead you can probably do with a troop event.. 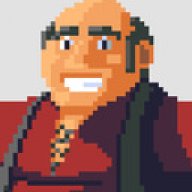 Isn't there a setting in the database to reduce targeting? Traits: 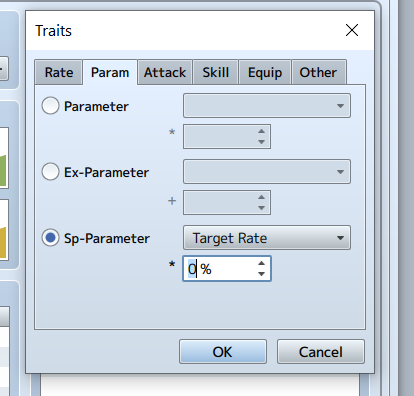 Not sure if that would prevent them from being targeted?

@dwiseman57 I have already done that part, but thanks anyway. I will see if auto-battle AI provides any improvements to other aspects, however.

@glaphen it's still the same definition as anyone else on the battlefield, and I'm planning for the state categories extension to handle the detection of the parameters of failure. I will add the selection block plugin in my next play test.

EDIT: So far so good. I have the targeting set now, although I didn't quite notice immediately that I also needed the skill core which I think I'll do some extra stuff with on top (but doing so is obviously intent upon its own discussion). All I can think of doing now is to make the targeting a bit more random on the enemy troops and this will be good. (That and pulling the recovery trait off the NPC now that I don't need it anymore.)

EDIT 2: Recovery trait purged and skill system is updated. I took the time to split battle skills from field skills a bit more within the context of what the plugin offers for differential priorities which is a nice improvement overall. Last man standing is also fully tested and will attest to failure under sole condition of the actual crew being knocked out. I have also used the opportunity to finish setting up a later scenario where everyone has their potential charge get interrupted completely as you enter the final battle (similar to how your divine connection gets screwed over in Ocarina of Time during the final showdown, essentially sidelining what has already turned out to be a little bugger of an assistant).

EDIT 3: I didn't actually require a troop event for this either, not to mention that it would limit matters to specific situations which is outside of the design specification (and besides, the states plugin has that covered already).
Last edited: Jan 21, 2020
You must log in or register to reply here.
Share:
Facebook Twitter Reddit Pinterest Tumblr WhatsApp Email Link

Dreadshadow
1st of March 2014 I joined and it has been a great experience for 6 whole years. The only thing I can say is a huge thank you to ALL members of this forum.
Today at 10:16 PM •••

Earthboundstar123
Hope everyone is enjoying their weekend!!!
Today at 8:20 PM •••

Kovos_Datch
Just finished making a character selector at the beginning of the game that allows the player to pick gender and skin tone. I couldn't be more pleased.
Today at 12:54 PM •••