I'be read other posts about this but I'm not understanding at all, please explain step by step how to do this,

My character is running forward

Here down I need help with

He trips then gets dragged several spaces back. I've done the actor image change to damaged character but nothing changes. He simply turns and walks back, please explain step by step what's going on.

Perhaps an image of the event would help us understand better what your having problems with. And which engine are you doing this in?

@Darkheretic The information under your avatar says that you are using MV, but you have posted in VNMaker. The answer will vary depending upon which engine you are using, so could you please clarify which it is.

I apologize, I didn't't see it saying VN Maker, am asking for MV. I have't used RPG Maker since the PS2, so I'm sure I'll be asking for help a lot. Where's the best place to ask these questions? I have it setup so he's laying down after his final step, then after the dialogue I want him to move back 13 spaces while laying down I just turned around and walks 13 spaces.

For some reason it keeps telling me that I can't upload my screenshot of my event editor so this is how I have it so far.

Most likely your problem is caused by the move route command given again and again and again without stopping. And that is controlled by the event properties outside the content window, the data you didn't give in your post.

As for the picture, just attach it when writing your next post, don't bother with the image tags.

This is where my problem is
SMR Player (had wait unchecked thought that maybe the problem so I rechecked and it still does the same) Wait
^
^
^
^
^
Change actor image: Rilum damage
SMR Player Wait
Down X 13
Shake screen 9,5,60 frames
Transfer Player
SMR Player
>
Event end
All dialogue is set with an image transparent and window bottom with no special effects, the entire event works except for being down and moving backwards. I have a Lighting Event effect event where he stops before collapsing, though it's a separate event and I don't think that would cause him to not change image?

Then store as JPG and not as BMP.
And the event commands are useless here, because what we need to see are the event properties like the trigger and so on.

Trigger is auto run everything else is default

To take a picture, open the event, hold down Alt and press PrintScreen. Then paste it into an image editing program and save as a png file. Then attach to your post.

Also please use meaningful thread titles. "Head ache" means absolutely nothing. I like to at least have a clue what people want help with before I even open the thread. And if I go away to do some research and want to come back and find the thread later, I'll be thinking "the problem with the sprite changing back during a move route" and "head ache" is not going to help me find the thread. It's also not going to help other people who have the same problem. Pick a few keywords and form a coherent sentence out of them, and use that as your title - it'll help everyone!

How many actors are in your party? Is the leader the actor you are changing the graphic for? What does the damage spritesheet look like? You would at least need to include a Direction Fix ON at the start of dragging, and a Direction Fix OFF at the end of dragging. Maybe also a Stepping Animation OFF at the start and a Stepping Animation ON at the end. 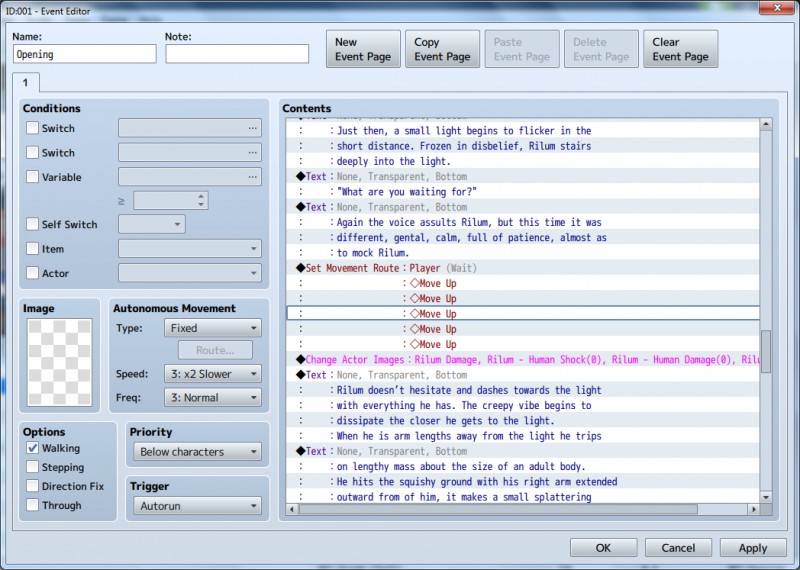 I forgot about print screen and I apologize for the poor title I was frustrated, tired, and not thinking clearly.
1
Yes
I'll go set up the fixed Direction. 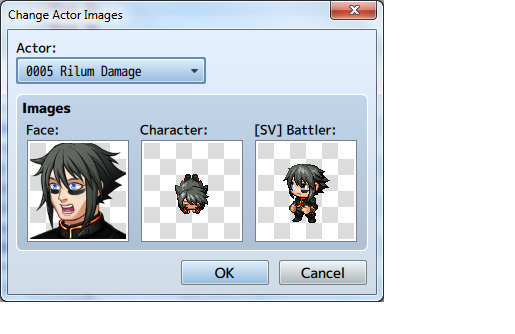 Is Actor 5 the only party member at this stage? Could we please see the damage sprite (not what you've given there, but the actual spritesheet you're setting it to).

Yes
Your recommendation about fixing position and disabling stepping animation made it look pretty good. But I'd still like to know how to do this for future purposes if need be.

Now look at the columns - on a regular character sheet, each cell in a column faces the same way, but they have different stances. The middle one will be "standing", and the ones on either side will have either the right foot in front or the left foot in front. When your character is standing still, the middle sprite is the one that shows. When they are moving, it alternates between the sprites, going from right to left then back again. This is called Stepping Animation, and it's turned on by default for the character and all NPCs. When you are dragging a character, you don't want it to display this motion, so you turn off Stepping Animation while dragging, then turn it on again afterwards.

Do you, by any chance, have any plugins that affect map sprites? Galv's Move Route Extras, for example? Or any that change the sprite based on whether you're idle, walking, or running? That would cause the sprite to change when you started moving again. The solution to that is to NOT use the actor at all, but to use an event with the actor's sprite instead, making the real actor transparent while the cutscene is going on.

The only one I can think of is GALV_JumpAbility but I'm not sure that would affect that? Here's my plugins... 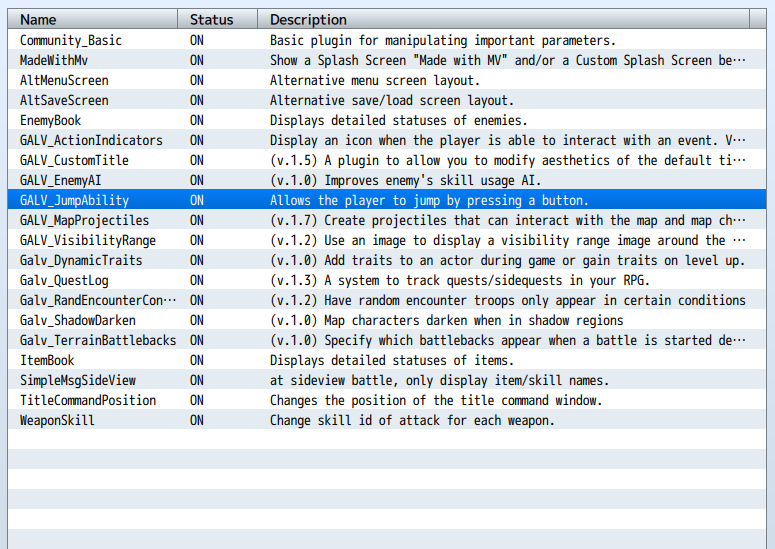 No. There are no plugins in there that I would expect to modify map sprites.

What about your move route that drags the actor back - is there any chance it is not completing before you change the actor image back to the walking sprite? Could you provide a screenshot of that part of your event?

Do you have any other events that might be on autorun or parallel process (including common events) that change the actor sprites? 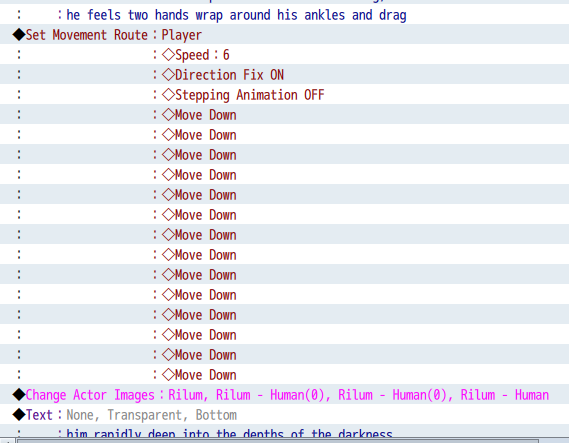 Those are two different actors, have you both in your Party, have you exchanged membership of the Party between them - or do you not under stand that the dropdown selection of the change actor images command changes the target of the command and NOT the pictures?

Omitting steps 2 to 4 will result in the command doing absolutely nothing.

Holy crap, I should of realized that *Face palm* I'm missing something else now, I'm using the method Shaz recommended which ended up working better I think. But now after ending the event and have control, fixed position, no stepping animation, and movement speed of 6 is still active when I want it all reset to normal.
Last edited: Jan 8, 2018
You must log in or register to reply here.
Share:
Facebook Twitter Reddit Pinterest Tumblr WhatsApp Email Link