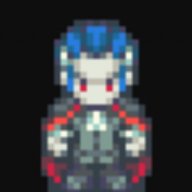 I've searched the web to no avail to find a solution to this. I'm trying to make it where when a player attacks they will attack using one of the three motions, (thrust, swing, and missle) I found that driftwood gaming has a video on how to do random attack "animations" but i wanted to see if they could perform a random motion and animation. Also, the characters in my game are restricted to using only one weapon per character, meaning they can't change equipment.
So when you select attack one character will either swing his sword or fire his bow, another character can attack with a chainsaw, gun, or axe. I'm doing this so that attack doesn't become redundant.

I hope I explained this well enough and I'm in the right thread. Thanks in advance

zerobeat032
back in April of 2019, I watched my friend's art stream on twitch. that was when I got inspired to draw most of the assets for my game. it's been a LONG journey since, but totally worth it.
Today at 2:14 AM •••