How did you develop the mythos of your game? 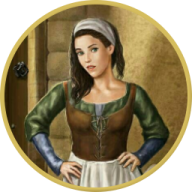 I create maps, then entrances, then secrets, then add the characters you can interact with on said maps, I tend to come up with character personalities as I create them in the character gen. I then try to connect them to a couple characters on the same/surrounding maps which helps me create mini stories which can then be built upon to come up with deeper lore.

As for coming up with really anything I kind of just wing it and make sure to give myself lots of room to make changes if needed. I don't connect anything in the actual game until I'm sure that it makes sense to me.

When it comes to the lore in my more comedic projects, it sort of just comes about as it goes along, and since all 4 RM games I've released ended up being related somehow.... it just ended up in this complicated string. One began as sort of a nod and "parody" of mind numbing CLAMP twists, so I tried to do something CLAMP style in the twist of my first RM game where even I didn't fully understand it until I started writing the sequel lol. Since then, my other projects have referenced it and this lore I built up which began in a joke game started to become more serious as I started to flesh out character backstories and how certain things intertwine, etc.

My more serious worlds are more deliberate. I have many inspirations and try to think, if I had a story with this theme or that theme, or I did it this way, etc. so then that develops over years, and then I add things like "I hadn't seen this genre do this before" and add it in. I also love conlangs, and even developed a language for one particular world uses (I constantly keep adding words to its dictionary, and I even have a conjugation section!) For the world's spiritual side, usually my own faith inspires the religion which is why it ends up monotheistic. Whilst I have not officially made a game for it yet, I have a fantasy world that I've been developing since I was 14 (and am planning to finally make a game based in it... but there's a lot of different time periods and important events it could happen in, there's even a post-apocalyptic era in its further future which is even more fleshed out than its ancient era lol).

So yeah, two ways how I develop the lore in my worlds. It really depends on the genre I am going for, and whether or not it's serious. But even my comedic projects do take on serious tones in some of its lore, I think it helps balance things out and even makes the comedy more believable and land when it isn't an endless joke all the time lol.
You must log in or register to reply here.
Share:
Facebook Twitter Reddit Pinterest Tumblr WhatsApp Email Share Link