How do I make a picture appear on the right? 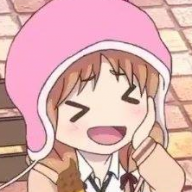 I'm still new to VX Ace, but I have played many games and some of them do this:

I found out that there is not a convenient "Upper Right" option for adding pictures. So I was wondering if anyone knows how to get a picture to appear on the right? Any specific setting? I messed with the coordinate but no matter what input I put in, I cannot get the photo closer to the right side.

People usually modify the message system with a script. It would be crazy to display an image individually every time. So I'm moving the thread.

A common "Hack" you can use in VXAce is you can set the image size to be the same as your game screen size and put the image manually on the right side using your graphics editor software.

MushroomCake28 said:
It would be crazy to display an image individually every time.
Click to expand...

I was doing that lol

I'm not sure I want to request a script. From what I've seen, scripts look really intimidating for a newbie like me who still can't figure out even the most basic of mechanics. I'll just go with manual I guess, perhaps a switch that auto display the image itself every time.

Alright then, I move back your thread to the original subforum. But honestly, these kind of scripts aren't really complicated.

Moved back the thread to RPG Maker VX Ace

It's pretty common that people demand "convenience" when using show picture. I often see people even bothered to set the image size the same as the screen size as mentioned. Using that method is just limiting its usefullness to just show and erase picture. Seriously, is it really that incovenience to just do the math and put the coordinate number directly? Or just do it once then memorize the number for future referrence?

VXA default screen resolution is 544x416. From here you can slice it to 4 and simulate a grid. 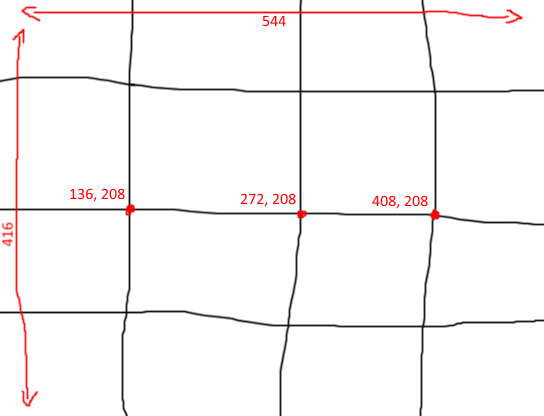 If you're gonna use it only on specific point, you can use this as referrence for left, center, and right align. Memorize it like you memorize your phone number. Show the picture with center origin point. The requirement is just the picture height is at least the same or higher than the game screen height, or else you have to increase that 208 number and find your own sweet spot.


MushroomCake28 said:
It would be crazy to display an image individually every time.
Click to expand...

.... if that's considered crazy, I guess I'm a lunatic then for abusing the show picture feature to its utmost potential.

Kuro DCupu said:
Using that method is just limiting its usefullness to just show and erase picture. Seriously, is it really that incovenience to just do the math and put the coordinate number directly?
Click to expand...

While doable, I find it tedious. Also, if you modify the image and change its size later on, this would mess up the whole project. The image taking the full screen is more flexible on that aspect, but less efficient since images are bigger and take more space in memory.

Kuro DCupu said:
.... if that's considered crazy, I guess I'm a lunatic then for abusing the show picture feature to its utmost potential.
Click to expand...

Well, then perhaps I'm the lazy one lol. As a programmer, I always try to think of the most efficient and lazy/practical way to do something, that's why I suggested looking for a script. In MV for instance, I created a plugin that reads the face file and index of a message and translates that into a character's data. That way I could display the character name at the top of the window without writing it every time (would also allow modifying the character's name later on). But yes, if OP can't find a script there's no harm in going with the show picture way, it's just going to take more effort on OP's part.

So for OP, if you're going with the show picture method, you can go with Theo's way and make all the sprites the screen resolution, which would make editing the image later on a lot easier but it will be less efficient on the game process, or you can go with Kuro's way and calculating the coordinates, which is more efficient but more work. It's really up to you.

I will probably go with Theo's way, it is the most inefficient but it's a simple brute-force way to complete the task. I will also mess around with the coordinates more, but last time I did it did not went as expected. You would think if the image is position at Top Left, then coordinate there in the middle, left edge of the screen should've been (0,0) and increasing X or Y would move the image to the right or up, and decreasing X or Y would do the opposite. However, what I got were not expected; when I input in negative numbers, the image still could move upward. It doesn't work in the way I expected it to and leave me room to guess, so it's a lot more bothersome to use.

As for scripts, I don't think I'm ready to use that. Plus, I think brute-forcing through with what's available on the game should get me familiarize with the mechanics and various options, rather than taking the convenient shortcuts right from the start.
You must log in or register to reply here.
Share:
Facebook Twitter Reddit Pinterest Tumblr WhatsApp Email Link

ct_bolt
2 hours & 20 minutes remaining.
...trying to hurry finish up all commissions before I never put the controller down again
Today at 10:40 AM •••