How to change event textures prior to battle exit animation? 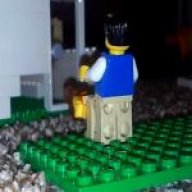 Okay, so I want to make the player change his sprite to a damaged version of his original sprite when he loses a battle, however the Change Actor Graphic command for a cutscene event only occurs after the battle exit animation is finished. Is there any way I can make the sprite be damaged before the animation even plays? Thanks for any help.

Put this mini-script into your Event:


Code:
(RPGXP had this as a pre-made command, "Prepare for Transition", but VXA no longer includes it for some reason.)


Put that mini-script before the battle, and change your graphics between them – the player won't see the changes until they return from the battle.

@kibcob since the default battlesystem has no sprite for the actor on the battlescreen, any asking for changing such a sprite before battleexit means that you're using a script to add that feature.


And that means we need to know which script you're using to create those sprites befor we can tell you how to proceed, because any guessed command (including the one posted above) might not work on that script.


In a case like yours, the best suggestion is probably to either look for tsukihime's script for additional troop event condition (including conditions that will be triggered before battleend), or use a temporary immortal state on the actor that checks the HP and changes the sprite before removing itself on HP=0 to allow death.

Tarzanthecat
I've started working on rpg maker again, and I can see a lot of improvement from when I was 13. I still have a long way to go, but I'm proud that I've gotten this far.
Animated Title screen is by SharkerrBlue(S
I am using the Nightmare Land pack.
12 minutes ago •••

LunarFlareStudios
I just can't walk to the store for lunch without walking past people smoking. It not only smells bad, it's probably poisoning me. I'm afraid I'll eventually have to be hospitalized. I can't take another path because there's too much traffic and drivers in the plaza are reckless sometimes. I almost got run over once, even after looking both ways.
37 minutes ago •••

SigmaSuccour
A self-aware gamer, playing my game on video, and being honest about his feelings: