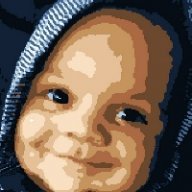 It is alluded to in this bundle when they mention the recent RPG Maker bundle, but will these assets work with RPG Maker MV? The music ones obviously will, but need to know if the graphic ones will. If so, but need to be resized, how difficult is that?

Basically, is it worth the $20 for all the stuff (and there is a lot) if I intend to use it in RPGM MV?

A lot of those graphics are 16 x 16, so will have to be resized, and may look poor quality when you do. The music alone is probably worth the $20 when you think how much music packs cost individually.

Do note that the license of gamedevmarket forbid you from using the assets in more than one commercial game.

And to think I spent over 70 bucks in past when the licenses were still perpetual... Well, thanks for saying that @Hudell!

Like @Hudell said, the licence given by Gamedevmarket is much more restricted than the licences common to the RM community - in fact this is much more restrictive than "only one commercial game".
Here are some other restrictions given inside there legal terms:
1) max of five downloads of the resources - if you loose the downloads, redownloading is limited (here you can redownload as many times as you want)
2) while edits are allowed, the full copyright/ownership of the edited part goes to the original artist (no shared copyright/ownership like common here and in other places)
3) in a series of games and sequels, each sequel counts as a different product requiring an additional purchase of the same resource to get another licence

And I didn't read the full licence - there might be additional problems as well.

They've now issued a new EULA for the packs through Humble that allow them to be used for multiple products now.

SimProse said:
They've now issued a new EULA for the packs through Humble that allow them to be used for multiple products now.
Click to expand...

A link would help others to read that EULA.

I forgot to answer the question.
Whether these resources are worth it or not, I'd say yes. However... The graphics are incompatible with each other except for those made by the same artist, which limits their usability. Many also offer next to zero room for building anything sensible from the box. Of course it's not expected for them to be perfect, but many lack the diversity.
There are a ton of graphics in one of the packs, great with dragonbones, but cartoon style and as such not compatible with default mv style graphics.
As for the music, I found it unimpressive. It's supposed to be battle music, but I would say the music is off. The magic spell sfx are a joke. The 8000 sound fx pack is great though and certainly useful. 8000 sounds might be overkill, but buying separate packs would cost around 15 bucks per pack, so it's a steal at this price.

Here's the link to the EULA for convenience:
https://www.gamedevmarket.net/terms-conditions/#pro-licence

However, the bundle also included a pdf with the following paragraph in it:

Each asset that comes in the bundle is mainly covered by GameDev Markets standard license
terms, with one vital difference. At the moment our license states that each asset can only be used
in one project, however we are in the process of removing this clause, so for the purpose of any
Humble Bundle purchases, all assets can be used in multiple projects.
Click to expand...

And to the OP:
There are some Time Fantasy RPG assets in there that are pre-formatted for RPGM (and have even foldered them separately to make life easier), but there's a bunch of assets that aren't and would require additional work.

I own most of the hand painted top down toilets and they're really really good looking but not even remotely sized to any rpg maker as with most of the assets listed in the lower priced packs. A little elbow grease and you can get it working though.
You must log in or register to reply here.
Share:
Facebook Twitter Reddit Pinterest Tumblr WhatsApp Email Share Link