I have a lot to learn so let's get started! 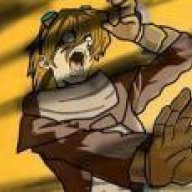 I'm relatively new to the RPG Maker community, even so more the VX Ace community.\

So I'll get right to the chase:

After over a year of developing in our free/boredom time, me and a couple of friends of mine were working on a game in RPG Maker XP, and wouldn't you know it, the Humble Indie bundle had a $12 special that us poor college students (and one of us just working) just had to grab on!

So we got RPG Maker VX Ace, and after long debates we finally managed to convince the main developer of our game to start using VX Ace instead of XP. HUZZAH MORE MODERN SOFTWARE!

Since I was the one pushing this change it was my job to start working on re-making the maps, while the other two continued working on the story of the game. Well I got VX Ace and XP installed, I open both programs up (so I can pretty much copy the maps as I make them, since I can't just export from XP to VX Ace from what I know), and as I have both of the programs running...I get into a dilemma.....the scaling of the tilesets and character(s) are completely different....but in a bad way....the tilesets in VX Ace are so incredibly smaller and limited that I didn't know what to do.

I've played a little bit of Skyborn, Deadly Sin 2, and other games I got in the bundle, and other RPG Maker games I've played, and this just kinda confused me.

Why can't I use bigger models and more realistic scaling in VX Ace like I did in XP....I don't want my character being 1/3 the size of a castle....I want to build a wall and have my character walk up to it and have it cover my whole screen,

So how do I get around this? I mean the RPG Maker VX Ace promotion video showed that not everything is in a small scale like the default, and not just the environment....the characters are super small too!

Can someone please help me here? Are there some settings I need to change? Is it a issue of tilesets and I need to get new ones? HAAALPH!!! :'(

I hope to hear from anyone soon, I look forward into reading what all of you have to say.

The first Screenshot is a comparison between XP and VX Ace scaling. The second one is a demonstration of a map being developed and played, and the thrid is a example of a game called Deadly Sin 2 and it's scaling.

And this is also a nifty one that will let you do some of the over head tiles (and secret passages) like XP allowed.. it's not 100% like it but it's the next best thing without doing a lot of tileset edits...

as for making the maps scale to the player.. some of the default tiles work good with mack sized characters or you could use the Mack tiles. There are also some great artist that make some great tile sets that work well with taller characters.

If you search for her resources, you should be able to find tons.. mostly parallax mapping, which you might have to look up some tutorials on that since it wasn't really an issue with XP users.