I'm having trouble with a bridge issue with VX Ace. Being above to walk under it and over it. 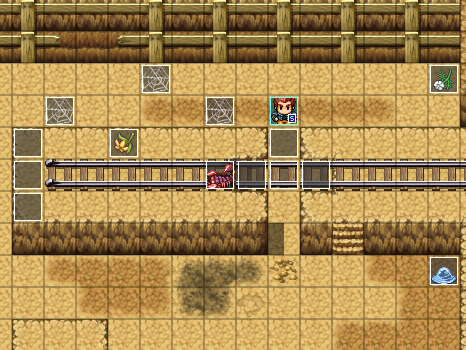 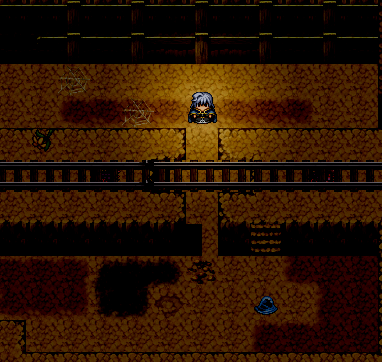 you need to make the bridge event two pages, with switches on the approach sides changing if it is above or below the player.
additionaly, you need to use a walkable tile and NOT a sprite for the event picture (those are below the sprites in the listing).

if that doesn't help, we need to see screenshots of the events to tell you what you did wrong.

Ok. so I made two different tilesets for walking under and walking over tracks. But when I switch tilesets on the steps I get this error. No idea why.

If you actually swapped tilesets then you're doing it wrong.
Here is a thread that talks about bridges. Try the way I explained and see if it helps.

For the love of god, I can't make under and over bridges for the life of me

I've tried 4 tutorials online, each multiple times, to make an "under and over" bridge (you can walk under, but once you get on a platform, you can walk across). I'm not exactly sure what I'm doing wrong. Are there any tutorials on this site you can link me to? or if you can help directly...

There is a conflicting script stopping it from working right.

Tanarex said:
There is a conflicting script stopping it from working right.
Click to expand...

Well that makes me confused, because no scripts are required to do this.
My fixed demo file is still on the other thread.

For the love of god, I can't make under and over bridges for the life of me

how do I copy everything?

That's not a good tutorial. You should not use through. Most of it is good except the through.
Last edited: Dec 7, 2020

Tanarex said:
There is a conflicting script stopping it from working right.
Click to expand...

you don't need any script for this, and your map has to stay on a single tileset.

based on your map, you'll need FIVE events. The bridge event and four switch events in the four directions (your map screenshot only shows three switch events, the bottom one is missing).

1) bridge event.
give the first page a tile of the railroad as the sprite - you have to scroll down to the bottom of the spritelist to get the tiles.
set priority to "below characters"
make a second page
on the second page, set the image to the same tile as the first page
set priority to "above characters"
set condition to a switch "going below bridge"

2) create the two events above and below the bridge
both are set to priority below character
both are triggered by player touch
both have only a single command: control switch "going below bridge"= ON
no image, nothing else

3) create the two events to the left and right of the bridge
both are set to priority below character
both are triggered by player touch
both have only a single command: Control switch "going below bridge" = OFF

Finished. If the railroad is passable in the tileset (and has directional passability going only along the rails) this will work as you want.

if you want this on other maps where the structure is different:
just copy the bridge tile as often as you need to bridge the gap
move the switch controls to all approaches to the bridge (might have to copy them for larger zones)

And if the tile used for the bridge is multi-directional and you can't use directional passability, simply block the unwanted ways off the bridge with invisible events on priority "same as player"

set the scenery as follows:

-gap.
-TILESET bridge, drawn, with a tile set to "below".
-bridge heads drawn with tiles.
-events above the structure, as shown, type 1, 2 and 3. 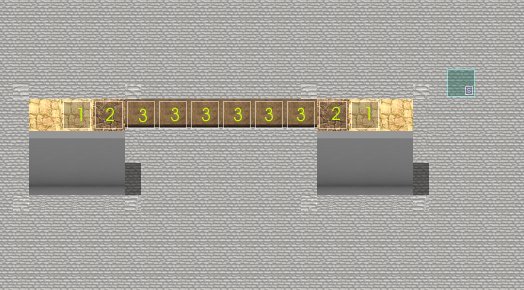 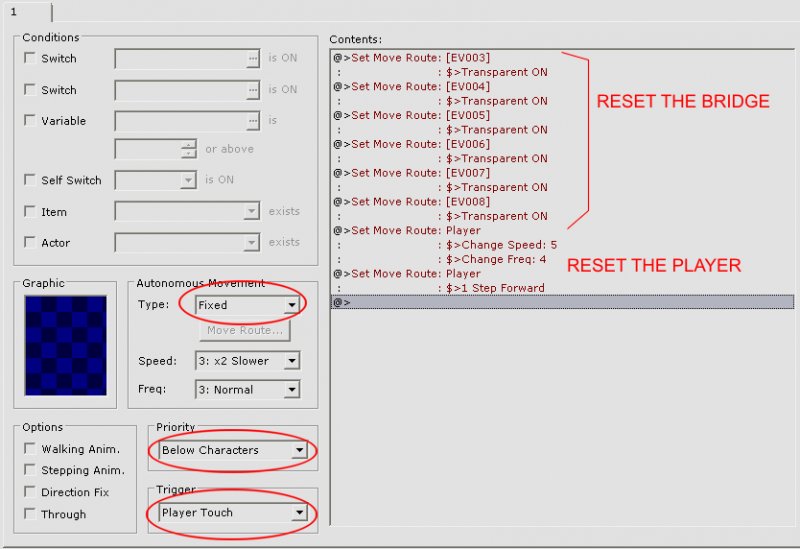 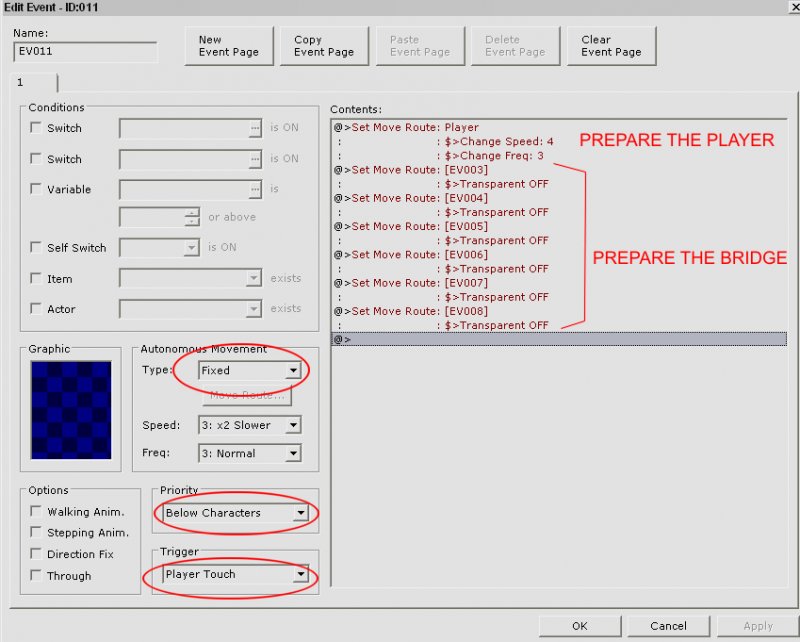 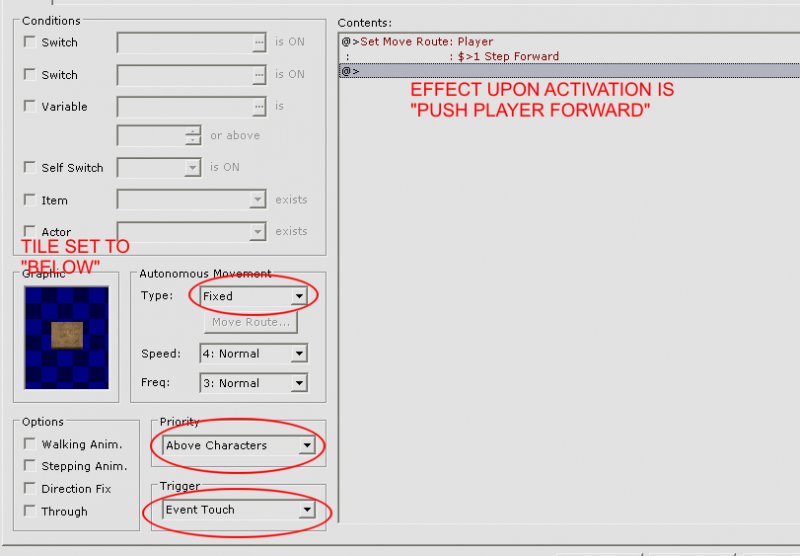 no through, no switches, no condition, no nothing.

@Andar I know the bottom one is missing. I was just trying to get the top one working first. Followed your instructions but the characters can still walk off the side of the bridge. I also only wanted to make it so only one of the characters can cross the bridge but slides when he does.
Figured out the error. Had nothing to do with switching tilesets or scripts.

What part is not working right?

I see from your image that you need to have the events on the side of the bridge as blocking events when on the ground level, but below characters when on the track. Can you show screen shots of the events?

Ok, I watched a 3-minute video and got it to work. Now I just need to know how I can get it to only slide over it by the third character and not the other 3. Still need help, please. Too dumb to figure it out myself.
Last edited: Dec 13, 2020
You must log in or register to reply here.
Share:
Facebook Twitter Reddit Pinterest Tumblr WhatsApp Email Share Link

Bendyizzt
Started finishing up my bosses and characters...I don't know how long...but its going to take long...
Today at 10:32 PM ••• 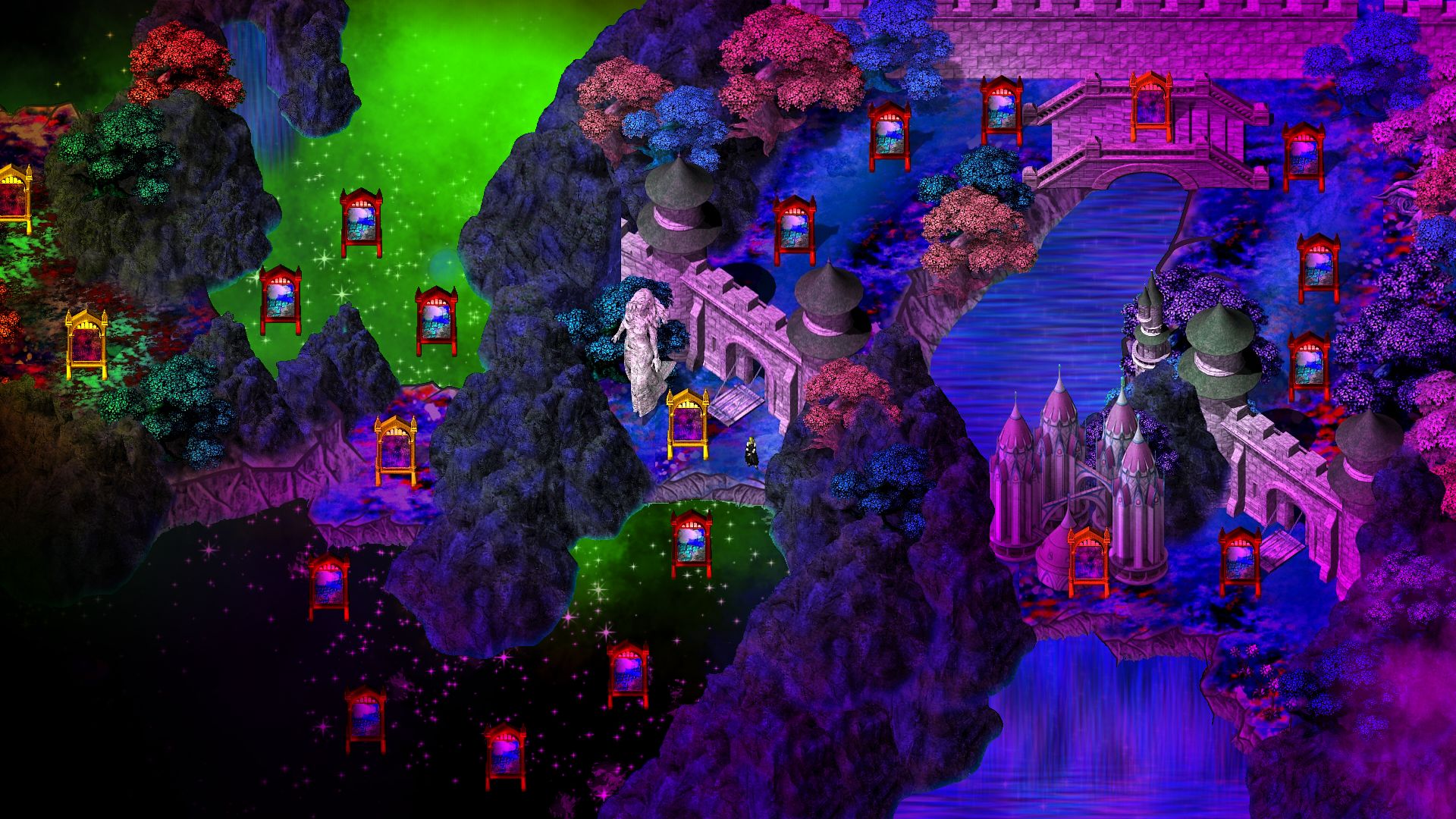