IN-Development - Here Lies: No One - Horror/Drama 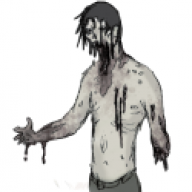 THIS TOPIC IS BEING MOVED FROM EARLY PROJECT DEVELOPMENT TO PROJECT DEVELOPMENT​
​
​
​
​
Currently  in-development​
Here Lies: No One​
A Post-Apocalyptic drama/horror​
​
[IMG]http://survivalvshorror.weebly.com/uploads/2/0/8/1/20813178/8356169_orig.jpg[/IMG]​
​
Based on the book- Here Lies: No One -comes a drama/horror story centered around two groups of survivors -a group of high-schoolers, and a group of scouts- as they try to survive the devastation of the world.​
​
​
Synopsis: Throughout the world, a terrible virus spreads uncontrollably.  There is no cure, there is no safety.  Left and right loved ones die and change... into something horrible.  Raf and his friends seem to be all that remains of the great American nation.  Their objective: survive and find the un-locatable 'Quarantine Zone'.  But soon they'll learn that swarms of infected aren't the only thing to fear in the new world.  Vulnerable minds snap quickly when all rules are cast aside and everything is washed in the blood of humanity.


"Why bury your dead anymore?  It's not like they're going to sit still for all eternity.  It's best to just take the tombstone and write: Here Lies: No One"​
​
Characters: Play through the game controlling characters from two groups: the Survivors and the Scouts.  ​Each character is unique to their ability and how the can contribute to the group.  Losing a character can cause permanent fatal consequences.

Currently In-Development:  Most of the game is in heavy development and is roughly 40% complete.  The title screen is fully animated with particle effects, fog, rain effects, and different characters fading in and out.  In-game menu is also completed giving players various options such as looking at all the party member biographies, showing location on a map, objectives, game time, currency, etc.  There's a day/night cycle in place with random weather effects.  And a portion of the soundtracks have now been completed.  Since everything is been done originally (except a few script parts- which the scripters will be given credit for- consent is already approved) the development is a bit slower.  The art is what takes the longest as the majority of the scripting is finished.  Yes, I wrote the book and I'm basing it off of the story.  I'm hoping that having so much effort and good story put into the game will help it stand out and show that it's a quality RPG.  I'm very grateful for all feedback!  No matter what it is: comments, questions, concerns, etc.  If anyone wants to help out with the project, just contact me via my profile.  If you do wanna help, that's great but I'm nervous about letting anyone on that isn't exceptionally familiar with RPG Maker VxAce and hasn't already published a couple of titles.  If interested, maybe send me a couple of examples of things you've done in the past and we'll chat!

Do you need some help?

Hey, I see you speak some Portuguese!  Que legal!  What I really need that would help would be a bit of insight/advice about battle style.  Rpg maker is known to have a similar style to Final Fantasy 7/Gameboy Pokemon -turn-based battle.  Now that could work just fine with my game but also how would a more action-y shooting game feel like for RPR-Maker?  Something where a character could equip a weapon and fire at an enemy on the map instead of walking up to them and triggering a battle sequence.
You must log in or register to reply here.
Share:
Facebook Twitter Reddit Pinterest Tumblr WhatsApp Email Share Link