You asked the wrong person to LP it then... Indrah is a lot of things but gentle she is not. I can't wait to hopefully have my demo torn to shreds by her vicious criticism however. (If I ever get the damn battle-system to be functional that is.)

Um, I'm giving you the chance to back out now if you want, because as stated I am many things and gentle is not one of them :I

You can peek at any of my let's try videos and see if you're okay with that. I really don't pull punches, and I won't have it agaisnt you if you'd rather I not play it knowing that.

Indrah said:
Um, I'm giving you the chance to back out now if you want, because as stated I am many things and gentle is not one of them :I

You can peek at any of my let's try videos and see if you're okay with that. I really don't pull punches, and I won't have it agaisnt you if you'd rather I not play it knowing that.
Click to expand...

Go ahead and do what you must! My body is ready! 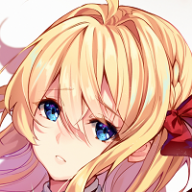 See you on the other side, fresh meat.

I think Indrah should add this into her main post (just to avoid misunderstanding):

I don't have much time to write a response at the moment, but let me mention a couple things.

- You're right about the witch Riel, she is a creepy rapist type character, and that's the entire point. You're SUPPOSED to think that. Cecilia is a softie and she wants to find out why Riel is doing what she is doing, but in the end it's going to become apparent that Riel is just really, really screwed up in the head.

- You complained about things doing too much damage to you... but neglected to use even a single Potion to heal at any point. You start with several of them and enemies are made to drop them pretty frequently.

- You never bothered to check your equipment. You picked up a Dagger in the castle, which increases your attack speed, and an Iron Gauntlet which gives you an ATK boost, but you never equipped them. These alone should make you able to kill all of the enemies in the tower in 1 normal attack hit if you're at least level 2. You never even visited the equipment shop either. In Crossed Hearts, your default equipment basically does nothing.

- Level is hugely important in the game, and even one level can make a difference. The game is balanced so that, if you fight every encounter in the tower (not even including random battles on the world map), you will be at level 3 by the time you reach the boss. You should be taking a couple points less damage with just that much.

- You complained that you only had one ability, but there's actually two more abilities that you can buy from the scroll shop that you were in, but completely skipped over. One is an attack with a speed advantage that costs MP, and the other is a stealing skill which costs nothing.

She warned you! XD

I'm serious, you can basically count on one hand the number of RM games that she enjoyed (I know only Ib and Halloween Bash). XD

Just follow her advices and you will be ready to go.

I just went through your vids... I really liked them! Had more than a laugh with your comments (and your accent)

You're harsh but honest in your opinion... that's something weird to see in nowadays LP.

If you're up to DEMOs I'll be most likely popping up around here in a month or two for you to review mine (if you like adventure games -aka no combat-) >.<
Last edited by a moderator: Feb 7, 2014

Updated the opening post with the links to a whole list of crapoli I hadn't updated here (because I'm a lazy ho).

Let's Plays for: Yume Nikki, Future Helper and the 7 Towers, Heir of King

And a bunch of Non-RM games.

If nothign else, I suggest you watch the 7 towers vid, because that game is golden.

Also I'm up to streamign these days so feel free to drop me requests/suggestions please! Just be warning I'll have no mercy

I like your honesty; it's refreshing, and it also reminds me of my teacher back when I studied graphic design. It's the best kind of feedback, in my opinion. When the day comes that I complete my project, I hope you're still doing these, as I'd love your feedback on my creation.

This is the time where I wish my demo was longer than 30 minutes so Indrah could play it. Hopefully I'll get enough gameplay done soon ^_^ It will blow your mind (hopefully in a good way )

Hi Indrah. Can you please play through my game Quincy and Amber? It's a short 15-minute demo and I'm sure you'll enjoy it.


I know it doesn't meet the 30-minute requirement, but I'm pretty sure you'll enjoy it nonetheless? That is, if you have nothing else to play at a certain point.

I failed to see this :I

I can't stream much lately because my mic is shot to **** and won't record crap, plus a lot of really weird issues with sound recording lately ><

I want to wait to get a got headst at east to return to actually streaming ****. Otherwise its just me ranting with the terrible noise of me hitting the SECOND headset all the time (two headsets yo! for extra uncomfortableness when recording because I have one with a working mic and one with working audio! isnt that sucky~)

Indrah said:
If nothign else, I suggest you watch the 7 towers vid, because that game is golden.
Click to expand...

lol at Enelysion putting you to sleep. XD It does start off rather slow...

Updated (just added a few games that I hadn't listed here adn the IGMC rundown link). I'm open to requests btw, so if you're up to it (and are ready for no holds barred) send me a sign~

thatbennyguy said:
Hi Indrah. Can you please play through my game Quincy and Amber? It's a short 15-minute demo and I'm sure you'll enjoy it.

I know it doesn't meet the 30-minute requirement, but I'm pretty sure you'll enjoy it nonetheless? That is, if you have nothing else to play at a certain point.

Is it OK if you could play this?

Sure I'll give ita  twirl. Forgot I had that on the to-do list. (IGMC wiped my memory clean)

LPs: Lafrenze, Once Upon the End (part1)

I recommend Once Upon the End for hilarity, and Lafrenze since it was an old demo of mine. Now you can see my own bad choices of the past and laugh at me all you want XD
You must log in or register to reply here.
Share:
Facebook Twitter Reddit Pinterest Tumblr WhatsApp Email Link