Is a VNM battle system possible?

I am curious as to whether or not Visual Novel Maker could support a RPG Maker-like battle system. I am curious about implementing something like this into a future project alongside the program's capabilities for making visual novels. The hope is that the visual novel interface could seamlessly or easily transition to a battle system, triggered by variables that act like random encounters.

If anyone needs me to divulge more information in order to get an answer, please let me know. Any help would be greatly appreciated.

by default, VN Maker has no battle system. However, with enough experience, it is possible to create one even without using scripting. But at time of writing, there is only one game I am aware of which ever created a full battle system without any scripting which is the game "Path of the Midnight Sun". There is a video of the game here which also shows the battle system:
However, the developer of that game has a huge amount of experience with VN Maker and its commands. So depending on the complexity of the battle system, it is a lot of work to do and not an easy task.

If you are an experienced programmer/scripter, than you could also use CoffeeScript/JavaScript and then of course it should not be more difficult than it would be with other scripting engines.

I hope this information helps you out, if you have further questions or if you need more information you can just ask here or also join our Discord channel:

Check out the Visual Novel Maker Official Channel community on Discord - hang out with 627 other members and enjoy free voice and text chat.

Of course it's possible. But depend on how much you want to invest the battle element to the game. The most approachable (probably most easy to make) battle system I saw on VN game is :

I can't even call it "battle system" because there's no input from player, no levelling, preparing, etc. Everything is just bunch of random item and numbers. You just hold enter and hope that you win. Though that's because the game itself is just regular visual novel and the battle is just an extra... a representation of the character silliness. That's why it's just total random bullshittery and whackiness.

Ignoring the fact that it's R18 game, the game is AMAZING both story and representation. The game as a whole is linear. You can't get out from story progression and that makes level, stats, equipment means nothing but only just for show. Battle system overall may look simple BUT the real challenge is that every single monster you fight have their own strategy for how to deal with them. This demand the player to READ carefully before taking action. Sometimes WAIT command is important. Sometimes SUICIDE command is important. Certain monster can only be damaged with particular skill that can only be used after certain command. 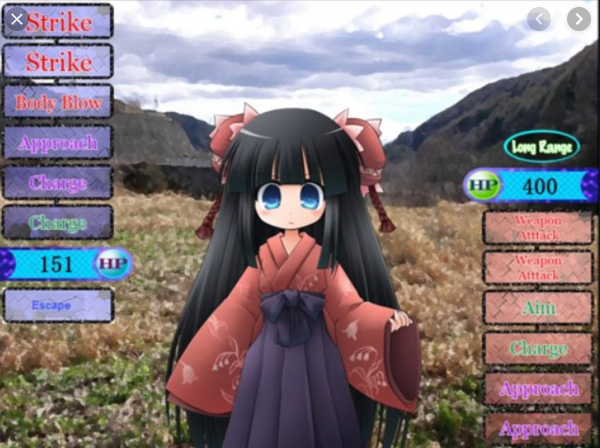 Yes, it's R18. But story is good and heartwarming. Althought the theme is pretty sick... You are an ungodly invincible tentacle monster chasing after little girls. Your enemy goal is to run away or stunned you. The battle system have levelling and upgrade tree. There's strategy to the battle. You pick 3 action from your randomly generated deck VS enemy 3 action from their respective deck per round. As simple as that.

Note that I only mentioned VN with simple battle system that I know. I assume the rest to be a bit more hassle / complicated to code. Here's honorary mention by the way :
- Cherry Tree High Girls' Fight
- Boob Wars : Big Breasts VS Flat Chests (R18)

My opinion regarding putting battle system in VN, you can't just put it there. It has to correspond to its story telling counterpart. You have to treat the battle (as a system) as the part of the story representation. Little Busters and Monster Girl Quest is a good example for that.
You must log in or register to reply here.
Share:
Facebook Twitter Reddit Pinterest Tumblr WhatsApp Email Link

Shaz
If I recorded while I created (what I think is) a small plugin, would you be interested enough in the process to watch it?
Yesterday at 5:39 PM •••