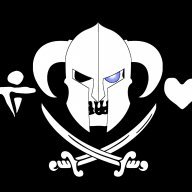 Hey there, hi there, ho there, how the heck are ya?
It's Xenos here, doing the semi-annual-every-other-year check-in thing I seem to do with most forums these days. I would say "Yeah, I'm happy to be back and you can look for more stuff from me in the near future!" but that would be nothing but a lie. I hope to be back, and I hope you can look for stuff from me in the future. But life has a funny way of taking all your plans, and dashing them like a Scooby Snack on the Jagged Teeth of Reality.

Anyway, I'm back (for now), I've got MV, I've got some resource packs (quite a few, actually) and I've got some ideas (some have been funking around in the back of my brain for a few years).

What I don't have are: Programming ability, art ability, time, spelling/grammar ability, or the ability to focus on anything for more than a few days before my ADHD and ASD throw the idea under the bus and decide it'd be far more fun to play a game than make one.

The bright spot? My daughter has a copy of VX Ace now, and she's loving it. So I'm dusting off the old school books (yes, I actually ended up in school for game development at one point), and giving her some pointers, and might even show her a thing or two about basic global variables and triggers. That said, she's 10, so how well that'll stick... Anyone's guess.

Main thing though is time. I now work 15 hour days, 5-6 days a week. That's a long bleeding shift. The upshot? I've got some spare dosh, and can actually afford to buy the occasional resource pack, and might even be able to have some custom tiles made (since again, I DO NOT ART worth a damn), if I can ever get even a proof of concept game done. But yeah, long nights, impossible odds, keeping my back to the wall, as it were.

Anyway, you can tell I'm me because of the rambling incoherent nature of the post!

Well welcome (back?) and hopefully have fun!

Xenos2112 said:
But life has a funny way of taking all your plans, and dashing them like a Scooby Snack on the Jagged Teeth of Reality.
Click to expand...

Everyone has their things. Have time to make a game would be miracle to some.

Kupotepo said:
Everyone has their things. Have time to make a game would be miracle to some.
Click to expand...

gabrieldiastche
Remember guys: Drink water and workout is important too! Don't stay too much time on the PC working!
22 minutes ago •••

TheoAllen
My current peak of boss design.
Yesterday at 2:36 PM •••