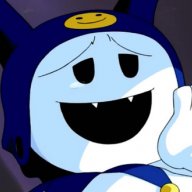 ATT_Turan said:
What are the settings on your state? If I understand correctly, states don't get removed at turn end until their counter is at 0 - that means the engine doesn't natively support the ability to have states that only last for the turn they're applied, as the minimum value you can enter for the duration is 1 (think of it as the number of full turns).

So for this to work, you'd have to use note tags or a line of code in your After Eval to make the duration of the state start at 0.
Click to expand...

I tried adding
JavaScript:
to the After Eval. The state now disappears if an actor is attacked (not 100% what I'm looking for but that's not really a problem), and that allows me to reapply the state to that actor by reusing the skill on the next turn. However, reusing the skill still won't apply the state to any other actors that were not attacked, as if the state is not properly refreshing like it does when an actor gets attacked (it does also apply to the actor that used/is using the skill, which I guess is because by that point there's been one whole turn since the initial usage of the skill).

These are the state's settings; they're fairly simple: 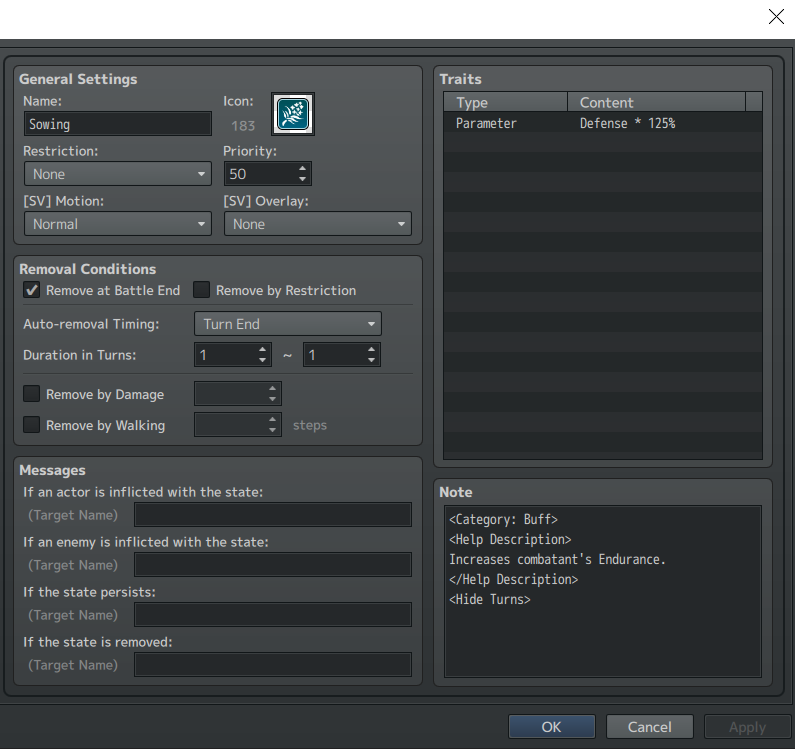 Turning off the Turn End auto-removal causes the state to not be removed at all, even though the addition to the After Eval sets the turns to zero (I assume that it doesn't check turn count if there is no auto-removal parameter). Forcing a removal through e.g. user.removeState in the state's note field is not effective.

Sorry if I'm overcomplicating this but I am stumped.
Last edited: Sep 20, 2021

You should start a new post about this, as it:
1) clearly deserves its own thread, and
2) is not actually about using JavaScript, but the functionality of a specific plugin.

As you do so, try pulling up the console in your game with F8, go to the console, and manually check actors with isStateAffected to try to verify that they in fact don't still have the state on them (as that's what would normally prevent a state from being applied).

Kinda stuck on where to even begin on this one.

You only need to worry about this method and while I'm unfamiliar with that particular array method, all you really need to do is fork in a conditional statement that allows all skills to be added to the list that don't have an id of 1 or 2. I modified the code to show you an example of what I mean, but it has not been tested for accuracy.

i'm trying to make a skill obtained from a weapon, using yanfly skill core, require both a specific state and a variable to be at least one what am i doing wrong?

@Vis_Mage you can use a for loop if they're consecutive. Suppose that your original variables are in variables 100-119, and you want to copy them to variables 200-219. So the code would be:

Code:
You can just change the numbers 100 and 200 to the starting values of your own variables.

And then >== is not a valid operator, but you were already told that.

If you're learning JavaScript to use in RPG Maker, you may find this a useful reference.

ScorchedGround said:
@cubeking1
Ah my mistake, the problem is most likely the ">==" then, which should be ">=".

this works thank you very much

Is there a way to give an actor exp via javascript without the level up message? I know about $gameActors.actor(n).gainExp(x), but if the actor gains enough exp to level up I don't want the message window to pop up.

imaginaryrose said:
Is there a way to give an actor exp via javascript without the level up message? I know about $gameActors.actor(n).gainExp(x), but if the actor gains enough exp to level up I don't want the message window to pop up.
Click to expand...

Code:
Can also apply to $gameParty.

That's because I made a syntax error and only noticed it just now-____-. It should've been actor and not actors.

It's strange, but even with the edit I still couldn't get it to work.

Outside of typos and calling it on objects it doesn't belong to, I can only assume two things that cause that error to be thrown:

1. It's syntactically different from MZ. It's the only version I use and most of the core files wasn't changed too much if at all.

The bold part will throw the type error, because while it's a method of Game_Actor, it's not to be called as a function in this context.

In any case, glad you got working.

Shouldn't it be $gameActors.actor(n).shouldDisplayLevel = () => false; instead?
If shouldDisplayLevel is a function and you overwrite it with false, then eventually something will call false() which will throw an error, because false is not a function.

Instead, what you want is to overwrite shouldDisplayLevel with a function that returns false, which the arrow function () => false does.

Arctica said:
2. You missinterpreted my post to be this: $gameActors.actor(n).shouldDisplayLevel() = false

The bold part will throw the type error, because while it's a method of Game_Actor, it's not to be called as a function in this context.
Click to expand...

You can't just decide something isn't a function. What you typed could be used to store a reference to the shouldDisplayLevel function in a variable and call it later, but it can't change what that function returns.

Nolonar said:
Shouldn't it be $gameActors.actor(n).shouldDisplayLevel = () => false; instead?
Click to expand...

That is more like it, if you included that as a plugin - however, my understanding of the original question is that the OP only wanted to not display level ups under specific circumstances.

So, @imaginaryrose - what do you want to do in your game? If you are always giving exp via script call and never want to display level up information, put Nolonar's line into a plugin.

But if you also have regular combat, and you want level up info there but not when you're awarding exp outside of combat, you'll need a way to control it. So, again in a plugin,