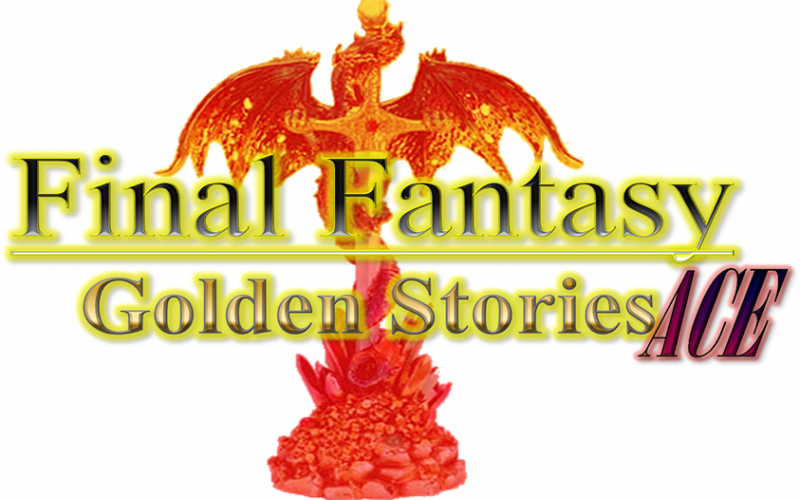 "The magical world, Krajina...The four ancient kingdoms of world strongest races... fighting each other to rule the universe... Love and hate, courage and sacrifice, fear and pain... Who goes to rule the world for peace? Final Fantasy Golden Stories!"

Final Fantasy Golden Stories Ace is a classic jrpg game that brings you an epic journey through the magical world of old-school FF series by Square Enix. Made with RPG Maker VX Ace.

An events begin the scene of bloody conflict between two parties: Claudio, the holy kingdom, where a lasting peace, and Hell Gorge, the demons were're seek to conquer the world, ended up in the Claudio's Fall and seal Avatar beasts forever.

15 years later, somewhere in the green Earth called Krajina, it's start with the mysterious objects called the Dragon Orbs. The Dragon Orbs were intended to be a thing of extraordinary magic and power, something to be revered, not for the ease of their method, but for the dream of never having to use them. Those Dragon Orbs are worshipped by the mystical humanoid called Orlanmians, who are living in peace at Holy City of Olando since they're keeping them for good. However, when the demonic spy attempt to obtain the Dragon Orbs for evil scheme, those orbs separate away to the various world. The crown-prince of Claudio, Prince Kayes, has changed his mind and beginning his journey with his childhood friend. Princess Laura and his army of Claudio called Human to gathering the six Dragon Orbs to grant a wish for peace. But not until the three other army show up: the Elflimian, the mysterious elf-like creatures with oriental clothes, the Orlanmian, and the Demons. During the war, each of them were fall in love, love can kill. But will the Earth regain back to peace despite the love and violence?

Features:
*10 playable characters planned for the series with 6 temporary characters.
*14 classes for each character. No job systems anymore.
*4 difficultly levels you choice from the start: Easy, Normal, Hard, and Legend!
*News! You can now have five party members in battle instead of four and switching party member during the battle.
*331 skills can be learn through levels or obtaining hidden skills.
*323 items, 170 weapons, and 164 armors are available through buying, chests, hidden area, quests and much more.
*Over 30 quests available by talking to NPCs or main quests.
*8 cameo characters from famous Final Fantasy games can be found for the sidequest.
*Crafting items/weapons/armors is only available after starting Chapter 6.
*314 enemies and bosses to face off during your journey.
*Cooking, cutting trees, mining, fishing and much more for fun.
*50 locations around the magical world of Krajina, the main settings for my game.
*Chocobo minigames, battle stadium challenge, and adorable creatures...oh my!
*Enjoy the epic battle of the four greatest kingdoms with romantic moments between two enemies, life or death, and from friendship to true love. This story is about betrayal, sadness, love, war, friendship, the battle of four kingdoms, from enemies to allies and from death to revival.
*Over 150 music soundtracks were taken from other games, belonged to rightful owners, not me!
*The game story took inspired by The Lion King, Dragon Ball, Final Fantasy and Sailor Moon.
*Collect 6 legendary Dragon Orbs and summons the most powerful god of the dragons to save the entire universe from evil's ambitions.
Section 2: Playable Characters 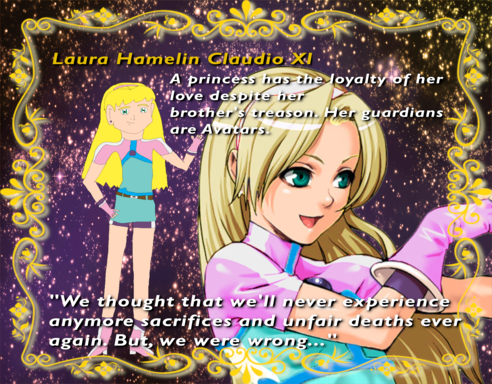 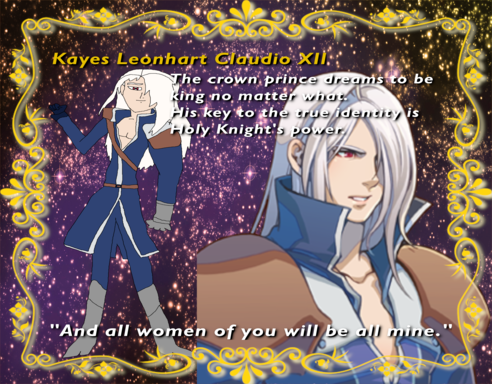 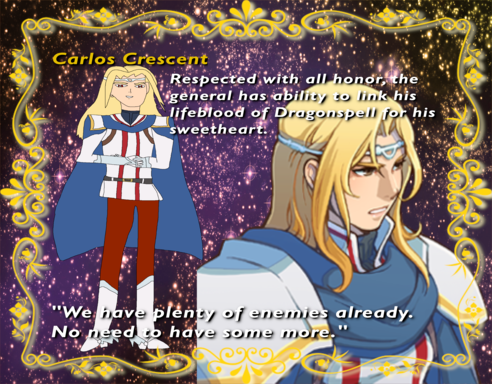 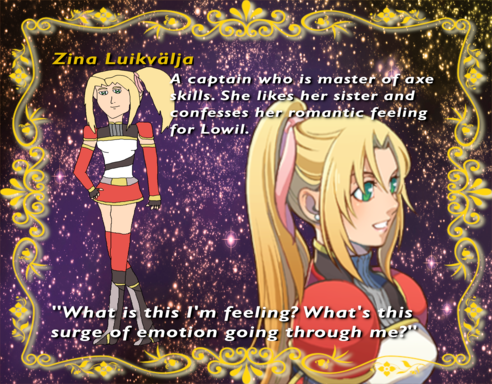 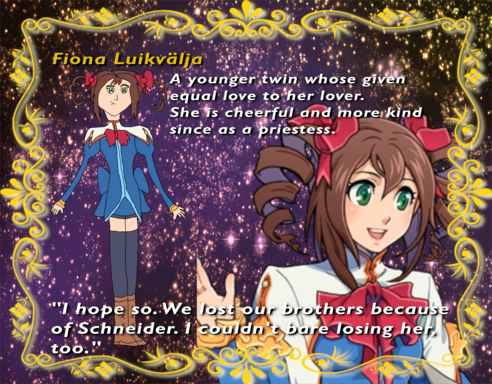 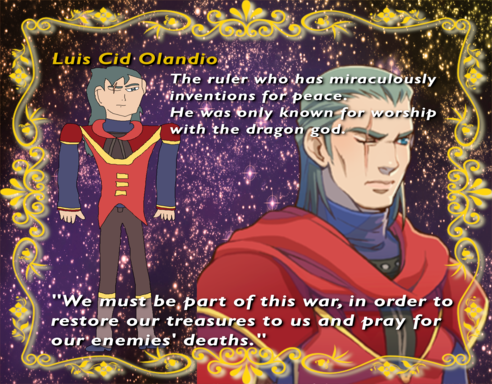 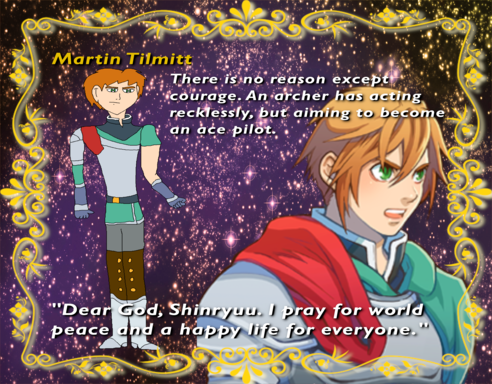 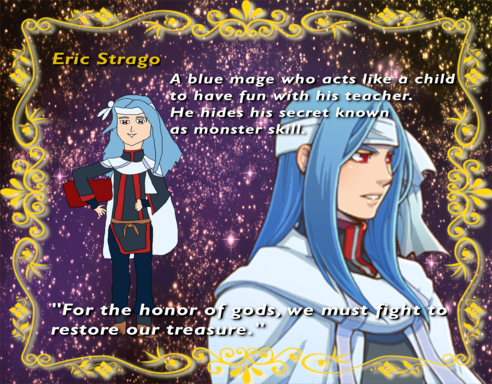 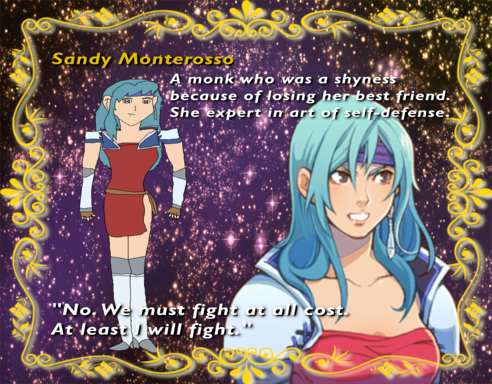 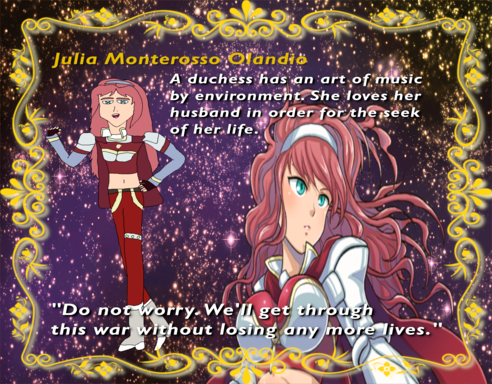 Final Fantasy Golden Stories, like most every classical FF games, has four basic game modes: an overworld map, town and dungeon maps, a battle screen, and a menu screen. The overworld map is a scaled-down version of the game's fictional world, which the player uses to direct characters to various locations. The primary means of travel across the overworld is by foot, a ship, a Chocobo, and an airship become available as the player progresses. With the exception of some battles in preset locations or with bosses, enemies are randomly encountered on field maps and on the overworld map when traveling by foot, Chocobo, or ship, and must either be fought or fled from.

The game's plot develops as the player progresses through towns and dungeons. Some town citizens offer helpful information, while others own shops that sell items or equipment. Dungeons appear in areas that include forests, caves, mountains, swamps, underwater caverns and buildings. Dungeons often have treasure chests containing rare items that are not available in most stores. The game's menu screen allows the player to keep track of their experience points and levels, to choose which equipment their characters wield, and to use items and magic. A character's most basic attribute is their level, which can range from one to fifty, and is determined by the character's amount of experience. Gaining a level increases the character's attributes, such as their maximum hit points (HP), which represents a character's remaining health; a character dies when they reach zero HP. Characters gain experience points by winning battles.
Section 5: Screenshot 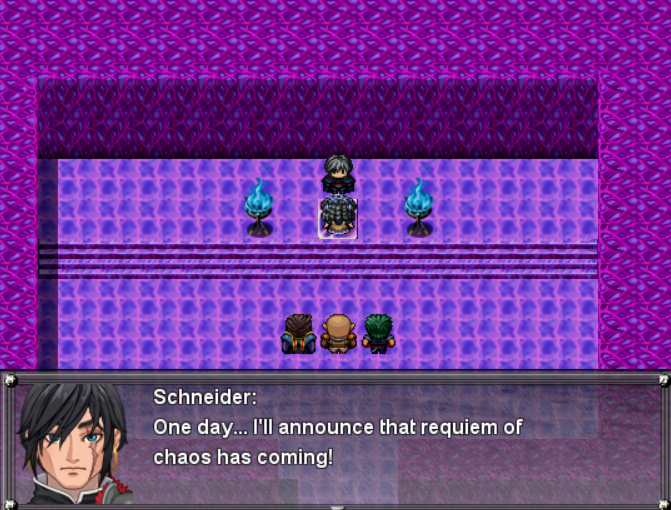 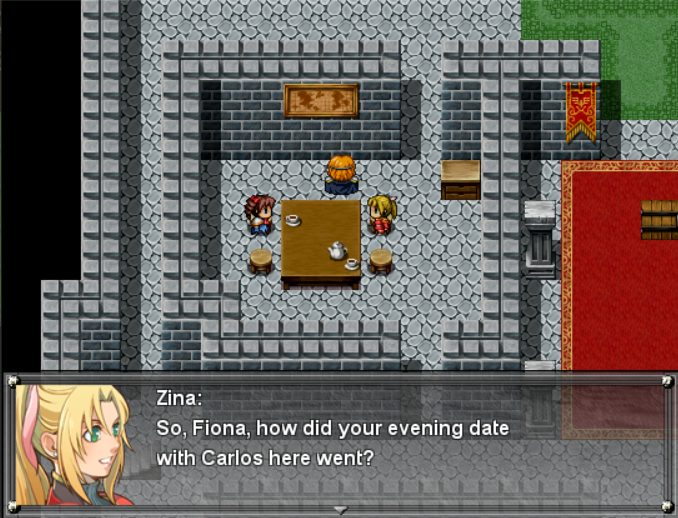 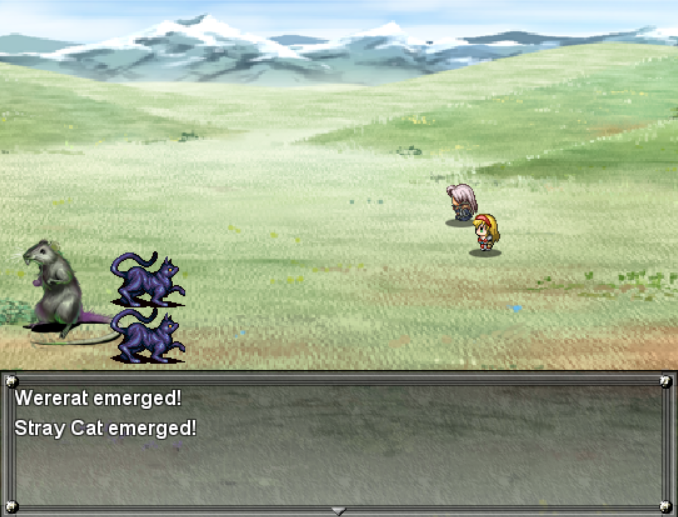 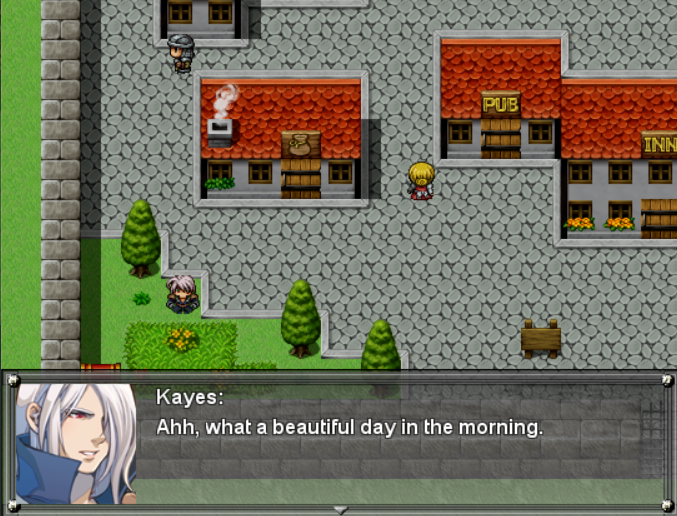 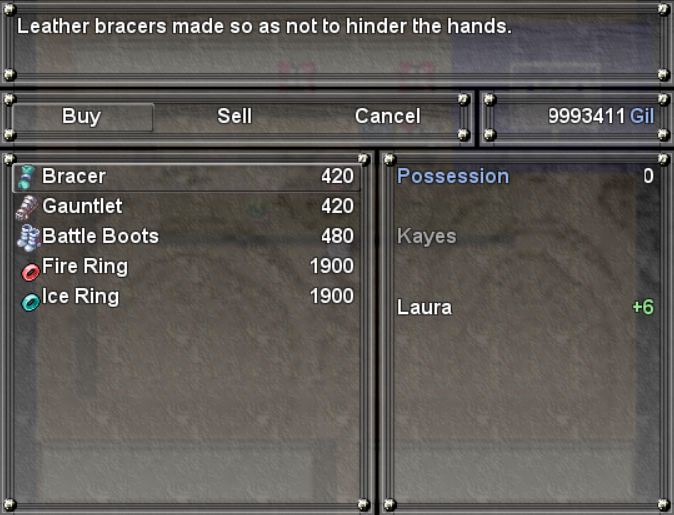 "Love Will Grow" by Risa Ohki
"Arigato" by Kokia

LittleLulu
Age Rating
This fangame's age rating is T for Teen (+13) to have content that may be generally suitable for those aged 13 years and up.

And now, the download!
Go ahead to my itch.io link!

Update
Fix the minor bugs and the V.1.2. has been updated!

Minor fix along with first of 3 Chapters were completed, the V.1.3 has updated!

Minor fixed with all Chapters completed! The new version, V.1.5., has now updated along with Last Save file!

New update! V.1.6. is now available with new feature: you can now have 5 party members in your team instead of 4 and allowing to switch party member during battle.

This game and its presentation look very promising. Just one small issue: The screenshot section doesn't contain screenshots (though screenshots can be seen on the game's itch.io page).

Euphoniac said:
This game and its presentation look very promising. Just one small issue: The screenshot section doesn't contain screenshots (though screenshots can be seen on the game's itch.io page).
Click to expand...

Okay, I'll add screenshots for it.

This game looks big and daunting. I'm not saying that's a bad thing, I'm actually impressed and amazed you could fit all that in and make it work together.

My main concern is I don't like games where every character can be every class. I feel this takes away the uniqueness of each character and I can't really get invested in them as an individual.

And as stated above, actual screenshots would be nice.

Thanks. Because I don't need job system.
I am planning to add 6 temporary playable characters soon. 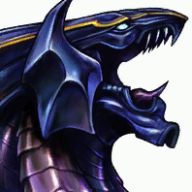 This game seems right up my alley.

hello.
when i go to the elder's cottage.
and talk to him.it say unable to find file.
Audio/BGM/9.Meeting in the Darknes.

norman said:
hello.
when i go to the elder's cottage.
and talk to him.it say unable to find file.
Audio/BGM/9.Meeting in the Darknes.
Click to expand...

Let me check this out and see if I fix this.

Fixed! Now updated to FFGSAce V.1.2., so go ahead and download to replace the first version. Have fun!
Last edited: Aug 3, 2020

hello.
i at lilma village got the axe pickaxe fishing rod.
where do i go now i use the axe on the tree on the road.
it go's away but can not pass.

norman said:
hello.
i at lilma village got the axe pickaxe fishing rod.
where do i go now i use the axe on the tree on the road.
it go's away but can not pass.
Click to expand...

Let me fix a little bug until it's done.

Edited! Now you can pass after cutting the tree that prevent you from passing on world map. Go ahead and download it! Have fun!
Last edited: Aug 4, 2020

Edited! Now with forest instead of hill/grass along with minor fixing, you can download it now and tell me if you find any bugs or errors. Have fun!

hello.
when you go to claudio kingdom and go to bed in the royal bedroom.
you see elia lowil and garnok the game will stop.

norman said:
hello.
when you go to claudio kingdom and go to bed in the royal bedroom.
you see elia lowil and garnok the game will stop.
Click to expand...

Currently I am playing and testing to see if there are need to fix them.

Edited: Good! Moved the tree away and fix the minor bugs! Go ahead and download it, have fun!
Last edited: Aug 5, 2020

I would like to make a suggestion, if you don't mind.
Ask someone to proof read the game for you. The errors are glaring, and would certainly cause some potential players to pass on this.

hello.
now i got this unable to find file Audio/BGM/9. Meeting in the darkness.

norman said:
hello.
now i got this unable to find file Audio/BGM/9. Meeting in the darkness.
Click to expand...

Fixed! Go ahead and download it, have fun! If you find any bugs or errors, tell me, okay?

hello.
love the game.
where do i go when you get the ship.

norman said:
hello.
love the game.
where do i go when you get the ship.
Click to expand...

In Chapter 3, I headed to Noah Desert to fight against Cid. After defeating him and joining your party as the playable member, Go inside the Pyramid to defeat Omega Dragon so Julia will be joining you as the last member. After recruiting five party members, you may go whenever you like, I doing sidequest by going to Odin's Ruined Palace to obtain the optional summoning beast. Then go to Olando, where you can do sidequest, buying the stuffs and finding items. If you talk to Merchant, he asked you for money exchange for TP Codex. Then go to Eric's house and talk to Eric's older sister who said that she was worried about their little sister and talking cat Cait Sith who are at lost in Deep Cave of Fabula. You obtain Dynamite that you can blow up the cave's open that prevent you. Go inside the sewer cave and save the girl from the boss. Once you saved the girl, go back to Olando to speak with older sister again, after that, the story was continue as you can no longer using ship until Chapter 5.

ImaginaryVillain
No edits, just gameplay from one area to the next. Plus all my new shiny interface stuff... And I even remember to bolt down the portal so it won't escape this time.
Yesterday at 6:40 PM •••

Sausage_Boi
You guys just freely offer up your Autonomy?
Yesterday at 5:47 PM •••