I got the jumping to work but he will jump regardless of what he lands on... how do i make it so people can't just jump onto things, and right

out of the map. really hope someone knows how to fix this, preferably with just events.

Press my spoiler get my game tutorial.

I think the issue here is that the player could elect to jump onto something that would normally be impassable/inaccessible, and the OP wants to block that, rather than "how do I get the party to jump".

I'm not sure that this is solvable if you are using a common event.  If this is something that you want the player to be able to use anywhere, which is what it sounds like, then that's what they will do.

Might it not be simpler to have an event on the tile before the obstacle which calls up a common event which checks which way the player is facing and then jumps the player 2 tiles in that same direction?  No initial event, no jump, so no going anywhere inappropriate.  And you are still saving time by using a common event.

One problem you will run into is that if you just do an "advance 2 tiles" type of command you will not get the illusion of jumping.

If you want a true jump mechanic I think Ksjp17 may know of a script for one. 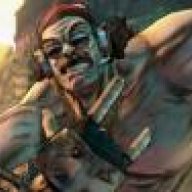 The script from Vlue


http://www.rpgmakervxace.net/topic/24116-field-abilities/
Lets you do this (it takes into account inaccessible) also lets you set a default key to be able to jump!

Could you provide a screenshot of how you evented jumping in your game, please?

If you mean to use strictly events to overcome the problem, you can use a common event with a 'parallel process' trigger to check for a region ID (to disable jumping on certain tiles), or a tile's terrain tag (to enable jumping).

You will need to place multiples of a region ID in your maps if you intend to make the player jump everywhere, but not onto certain tiles (eg. edge of the map).

It may be better to just restrict jumping to tiles tagged with terrain tag (e.g. fences), rather than allowing free jumping if you want to use pure eventing and are still getting used to your RM. It is possible, but you will need to be familiar with the basics first.

I personally haven't used the jump on key thing, as it's a LOT more planning on maps to where you stop people jumping and such (and since I currently work a lone) I don't want to put in unnecessary work for very little reward to the players.

I do however, have jumping over ledges in the game, simply make a jump event on a map where they can jump and away you go, I even have a tutorial event to explain when you should be able to jump!
Last edited by a moderator: Jan 7, 2015

Thank you everyone for the quick replies,

You have been alot of help.

I'm new to this forum

and have to say that I love how quick and

helpful your replies were.

RavenBlueIndigo
Stream will be live shortly with a session of the Interactive Text Adventure! Feel free to drop by!
A moment ago •••

zerobeat032
aero the acrobat 2 on sega had some absolute bangers on the ost... why Meeting Dr. Dis was just for a cutscene and not a boss makes me sad lol
33 minutes ago •••