Heya folks! (Let me know if this isn't possible using events, if it's not then I'll send this over to the JS boards)
So, basically I was wondering if there was a way to have an image (dependent on variables) appear by the press of a button? To be more specific, the idea is this: Basically I am trying to code an event where if I held down a button (for now let's just say the TAB button) the game would check a specific variable and depending on that variable, it would then show a certain image and stop the player's movement. The moment the player let's go of the TAB button, it would then erase the image (or images) and allow the player to move again. (Image below showing a concept of what it might look like.)
The Black is the actual screen whilst the white is the image. 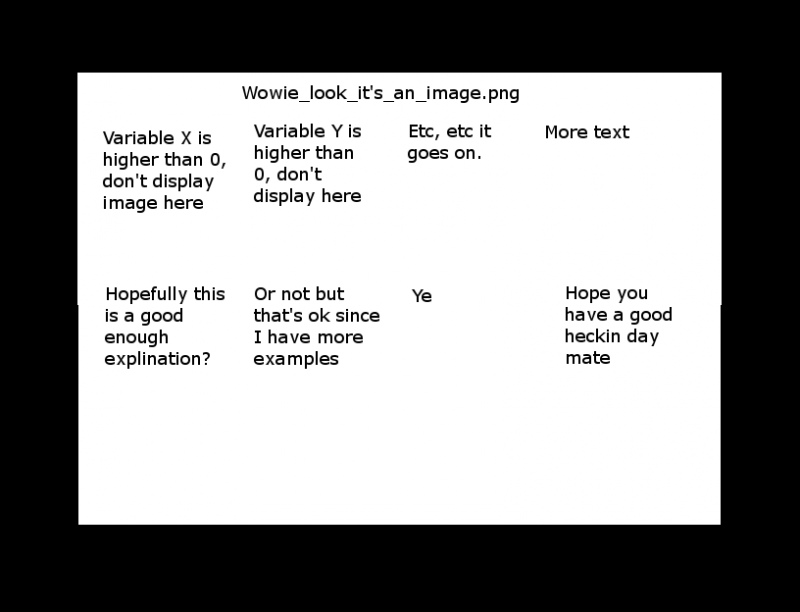 Idk if the image explained it the best, so I went ahead and fetched a game with a similar concept: Bad Dream: Coma.
For those of you who haven't seen the game, I have a link to a let's play of it here, though the thing I am talking about is at 3:57 - 4:25 and 4:53 - 5:15 of part 1, so no need to watch any other parts to understand what I'm talking about.
So basically, in the game it tracks what ending you are heading for. If I recall, my game has about 3-9 endings-ish (though most are just variants of other endings)? Either way I'm going to have it in a similar way. The similarities are where it shows which ending you are going to get and which endings are already off the table. I want it where when you press the button the game checks for Variable X (or whatever variable) and if it's higher than 0 then it will place an image over the ending you cannot get, giving the appearance that it scribbled the ending out.
Here's an image of that example as well. The screenshot is from the Bad Dream Coma Let's Play showing what it looks like: 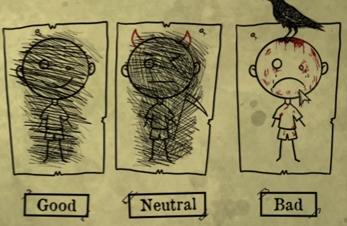 As stated previously, idk if this is an be done as an event, though if it can be: some pointers on where to start with something like this would be very helpful! If this is the kind of thing that needs JS Plugins then I'll shoot this over to the people over in that sub-forum.
Thank you all!
ThatPlush
You must log in or register to reply here.
Share:
Facebook Twitter Reddit Pinterest Tumblr WhatsApp Email Share Link

Plueschkatze
Friendly reminder: Make a back up of your project! ;3 I just did one and recognized I would have lost a week worth of work.
55 minutes ago •••