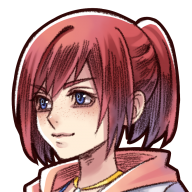 Not super set on the name... I'd like something more Kingdom Heartsy if y'know what I mean.

I've only been working on this for about a month and I've gotten most (not really) of the plot down, right now I'm just trying to replicate the feeling of the games as much as possible.

Anyway, the game will follow Hikaru, Sora and Kairi's daughter, a keyblade wielder in training. Who (shocker) looses her (girl

) friend when the islands fall to darkness again. Luxu and MoM will be the main antagonists bc I really want to shove a keyblade up their asses. My plot contains spoilers of KH3 sooooo spoiler alert!


Before the events of the game: Braig/Xigbar/Luxu has killed Ava, her body and heart has perished so she passes through kingdom hearts and is reborn as Hikaru, this is not known to the player. Also, another secret, she is one of the seven pure lights.
I'll have an opening using the Ray of Hope Mix, reminiscent of all previous games, in which Hikaru will narrate like Sora does: "I've been having these weird dreams lately. Like some sort of scattered memory. I want to line the pieces up... For your fate, and mine." (I tried taking elements from each of Sora's openings but I'm not 100% yet on this.) After the super symbolic opening movie that I don't feel like going over cause it's a lot, Hikaru will be in the Dive to the Heart. A tutorial will ensue much like KH1 but at the end it says "You are the one who will open the gates."
"Gates" is referring to a sanctuary (ayyyy lmao) where its basically the age of fairytales but the "gates" of Kingdom Hearts are open and no darkness exists.
Background: Sora has opened the door, which here I've made mean the Worlds are all one again just like the age of fairytales, so no more gummi ship thank GOD I hate that ugly thing

Hikaru's journey starts the day before her keyblade training is supposed to begin. The plan is to have everyone train her in different ways so she can utilize everyone's strong points. Before leaving to the Land of Departure where her father is waiting to start her first training lesson, she says goodbye to Yuka, her (girl

)friend, who is Namine and Riku's daughter, one of the known seven pure lights. Yuka gives her a lucky charm (much like Kairi's) before Hikaru does leave. When Hikaru does arrive in Land of Departure (I am dreading making this map) she has two different training lessons. First with Sora who tries to get her to summon her own keyblade and when she fails he lets her use the Kingdom Key, second with Aqua who teaches her her first magic spell (yay!) But alas, the light-hearted feel-good fluff cannot continue as Luxu has set destruction upon the Destiny Islands. Sora leaves with Terra and Ven to defend the islands and not let them fall to darkness. Surprise, they do anyway and all keyblade wielders in that world have been lost. Aqua senses the darkness has come to Land of Departure now and instructs Hikaru to "stay put" and goes to deal with the awaiting luxu on her own. Surprise, she fails and Hikaru comes out of the castle to see darkness swirling all around and no Aqua to be found. She engages with Luxu, seeing his keyblade and remembering it from a dream she had, asking him if he is Luxu. He's all cryptic like all kh antagonists but does tell her she is the only keyblade wielder left (lie, he can't find Riku so he's bopping around somewhere (It will be previously mentioned he's on a mission/away)), and she can't even summon her own keyblade

(her keyblade will be exactly like Ava's but different keychain and instead of the Vulpes symbol on it, it will be Yuka's lucky charm). Hikaru then demands to know what happened to Yuka to which Luxu replies "Wouldn't you like to know?" (haha, what a xigbar thing to say) before disappearing. Now, I haven't decided which world I'm going to plop Hikaru in first, probs Traverse Town but idk... but she will wake up somewhere after Land of Departure is also lost to darkness. Her adventure will of course be consisting of trying to find Yuka and get the other keyblade wielders back while also discovering some secrets about herself (the Ava thing, and pure heart thing) and facing the foretellers, Luxu, and the MoM. I'm not planning on doing disney worlds, just KH original worlds. (Not set on this either as it might be a bit limiting...) The game will feature synthesis (once I get it working, I think there is a bug in yanfly's plugin or i fudged something up), transformations of keyblades, a few mini-games I haven't decided on yet, etc... Again - trying to make it feel like a KH game as much as possible.
tl;dr OC is child of main characters and has to go on journey, antagonists are Luxu and the MoM.
Basically my question is:
Does this sound compelling - do you want to play it? - (Only the fans of the series will understand the plot really)

@Bosiphas, what are different between your game and Kingdom of Heart ?

What are motivations for Luxu and MoM to be evil?

Why is an duty for a main protagonist to fight against antagonists ?

I am very confusing please help me.

Have you payed the original series? All 7 games and 2 movies + mobile app (and now the newly released KH3 and seen the Epilogue that goes with it)? Otherwise it will confuse you no matter what, the series is long and has a lot of information with it and even I who has been a fan since the first game came out and has an extensive understanding of the plot and themes don't know everything. I'll explain it if you really want but it will be a VERY long read. The game is meant to be a game for long time fans

@Bosiphas, I am ok to thank you for your offer. Thank you for clearing think up. Great, that you already have a target audience.

@Kupotepo Thank you, I'm using this as a training for skills basically. Easier than diving into an original project on a platform you don't really know.

and sorry - I'm confused by your second comment saying I don't have to explain the whole lore to you. Did you still want answers to your original questions? or do you not know the series?

@Bosiphas, you do not have to explain to me. I do not know the series.

Are you still working on this game!?

Lilly said:
Are you still working on this game!?
Click to expand...

Yes and no... I'm in Law school, about to graduate in August so, its on hold until I finish (finals are kicking my ass) My avatar is my main character though!
Art by Crezzstar
I've commissioned them do my portraits for my characters.

I'm working on my own game right now, but I may still be able to help somehow.
I make my own sprites, Oh! Your making a Kingdom Hearts Game? Check out Messar Music or Mark Messar. (Same person.)
He's on youtube and he makes amazing fan music for Kingdom Hearts games when it's in development form.
You must log in or register to reply here.
Share:
Facebook Twitter Reddit Pinterest Tumblr WhatsApp Email Share Link