LTN Games said:
Developer tools is a debugger among other tools to help debug and design websites and applications. While the only differences between the browser and mv nwjs is the version, the dark theme and the timeline and profiles suck. I use browser to debug because I set it up so all changes made to my code refreshes the page automatically. Aside from that nwjs for MV is really outdated and a lot slower than the latest chrome browser, like a lot slower. Nonetheless developer tools is extremely powerful and the console is really just the first stepping stone, timelines, code stepping and profiles is where the magic can happen.
Click to expand...

Thanks, LTN Game -- that is very helpful to know
I've already written two tutorials on how to get into the debugger & use it: 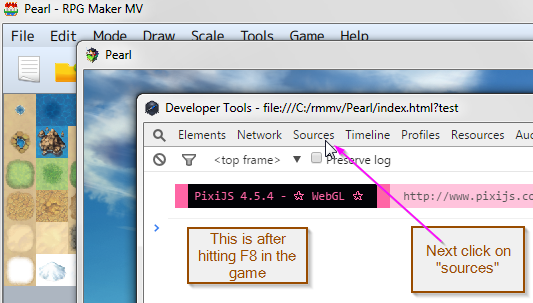 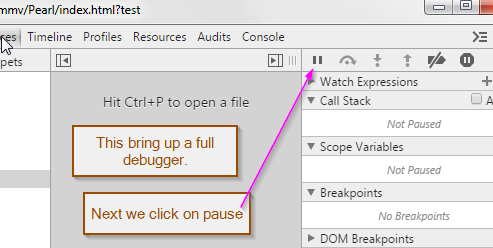 ​
Here is the debugger: 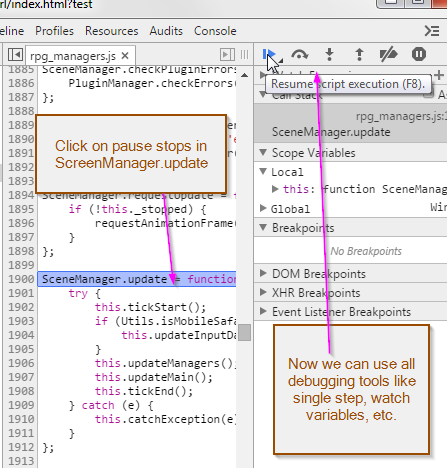 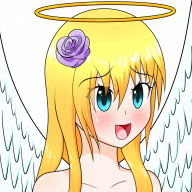 A debugger is more helpfull than outputing everything to the console first. It's a pretty bad style to"debug" with the console. But it's up to you how you do it, I preffer the debugger since it's more clean and easier to use than just output everything to the Console. (Which is designed to show just Error & Warning-Messages and not for debugging purposes)

Edit: @Poryg There is a Tool called debugger see: 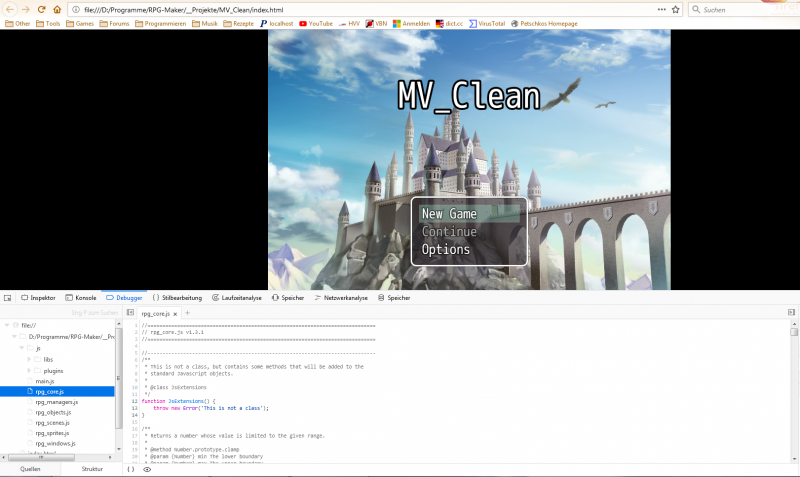 @Joy Diamond Oh you are a god send for showing me that the MV Console has a debugger built in where I can use my cherished breakpoints and single steps. I've been wanting to know how to get this to work for some time now and MV had it all along. Seriously, thanks! 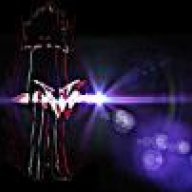 Sarlecc said:
No it doesn't sound terrible to me at all. Probably because I had other things that I had to do back then besides programming. However Like I said with MV I spent only 3-5 days before I felt I could effectively program in JavaScript. Essentially if you devote yourself to learning something you can learn it in a very short time frame.

I really don't think any example is mindblowingly boring if I learned something from it.
Click to expand...

It’s actually boring because normal people don’t have the mindset you do and sifting through the material learned which number in the upper hundreds for something that may apply to the mv engine is very frustrating and I think this is something that could be avoided. If people come together and make a tutorial series for scripting on YouTube or whatever where the basics are portrayed with their relevance to the engine. Examples and such.
This is a very daunting task hence why no-one is trying to do it, so the solution is simple. Have a list of required material and have people (experienced coders) make the tutorials no one person should have to dedicate months to this or even start a ******* account as inscentive if people aren’t willing enough. As this situation stands I, as someone who came over from unity I’m really thinking of returning to unity and never looking back. I’m sure a lot of people feel the same.


Indsh said:
SumRndumDde and Soulpower777 (someone please correct me if there are digits wroung) have both done just that. There really good!
Click to expand...

Sumrandumdde does this barely scratching the surface and soulpour777 who had a more complete set of tutorials took them down hence why I think no one person should be in charge of learning material, lest they remove it when it suits them.
Last edited by a moderator: Jun 19, 2019 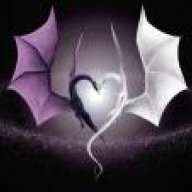 ChampX said:
@Joy Diamond Oh you are a god send for showing me that the MV Console has a debugger built in where I can use my cherished breakpoints and single steps. I've been wanting to know how to get this to work for some time now and MV had it all along. Seriously, thanks!
Click to expand...

The point I have to make is: Why did it take people so long to find this? I don't think MV needs to write a tutorial, I think it needs a landing page that provides links and tips for where to find tutorials, and the extras like accessing the debugger and console. Also include a link to that spreadsheet of script commands that replicate event commands, and have them open in default browser.

Hi, from my experience, nothing beat programing/dev experience (no pun intented). In other words, the more you do it, the better you get at it.

TSR said:
Hi, from my experience, nothing beat programing/dev experience (no pun intented). In other words, the more you do it, the better you get at it.
Click to expand...

True, and in the long run people who want help because they are stuck are just lazy and deserve to die or leave the rm programs to the professionals, cause the logo really doesn't say that children can also use the program. (I'm being sarcastic here). Anyway in all fairness the dev made the program and it's a good program, could've been better? Sure! However the did their part and now the rest is up to us. This really should be just about making money so hide your tips and tricks! No! Think about it for a second, if knowledge is spread think about the intricately designed dames that could get published? And so much faster at that. But nooooo people are stuck trying to recreate the wheel... Something which was already invented to make things easier for us. Sure some if us are stupid, heck I'm stupid cause it's easier for me to learn scripting through unconventional means. But similarly there are others, like a whole bunch who wholeheartedly want to give this a shot but simply aren't geniuses, those guys need help too don't you think?

I feel, there could be more to help those who want to learn LS for MV. I know that VXAce had plenty of documentation about Ruby, not Ruby in general but specificly as it pertains to VXAce. This is what MV needs for JS.


As a start, there are some pages that can be used by absolute beginners to just get used to the idea of using script, such as
https://kinoar.github.io/rmmv-doc-web/index.html
Poryg mentioned
or the .
Also, the entirety of the
https://github.com/rpgtkoolmv/corescript
for those who like to stare at a ludicrouzillion lines of code to figure out how it works. Sure, learning all there is to know about JS would help, and it is also true that THAT would be beyond the scope of anything the MV developers or any one member of the community can do, but why not tutorial for the aspects and tools of JS that matter specifically to MV?

I love Isaac The Red's idea of classes. I remember some years ago, some VXAce Veterans were running classes on mapping, eventing, spriting and even Ruby scripting for VXAce, giving weekly coursework in the form of creating a short piece of game or cutscene. I don't remember which specific forum it was on, though. Such a class would be great to have for MV. JoyDiamond's Crystal game is also a great idea, and I will definitely have a look at her link after wiriting this response.

I believe it is not in the best interest of the community, nor of MV, to "leave the rm programms to the professionals". There is a huge skill gap between those who can code in JS and those who can't. Sure, nobody needs to be able to do everything themselves, if one has a team with diverse skills to work with. No need to reinvent the wheel. That is part of being part of a community. But what about those who don't have a team? What about the solo developers? Somebody (sorry, I can't remember who it was exactly) said, those who want to learn should make the effort and learn instead of asking for help (paraphrasing here, not quoting), but is asking for help not part of learning?

If I ask the community how I can do something, it is because I want to learn that task, without having to first drag myself through a million other tasks and lessons. And when I ask somebody to do something for me, I am also making use of the community, focussing my efforts on the parts and skills I am proficient at without bogging myself down with things others can do better. Some will always seek to delegate, some will allways seek to learn. Neither deserves to be put down. As Kokoro Hime hinted at about her VN creator, Community is one of the strongest tools any community can have.

As TomatoKing said, MV strength and sales pitch is that it is easy enugh for children and strong enough for professionals, but there is by far not enough material to help the "children" become "professionals". Sure, we can't expect the MV creators to give us JS classes, but I believe, as a community, those who can should help close the gap. And not only for scripting, but also spriting, tile creating, eventing, etc... It worked for VXAce and all those before, why not for MV?
Last edited: Mar 24, 2020

It would be a nice community-engagement thing if they would do like a (bi-)weekly/monthly tutorial on how to make your own plugins.

Like, make your own menu, make your own HUD, you know, things that SRD used to do back in the day. Heck, they probably could hire him to do so if he's willing to.

I very much prefer this to the regular Restaff resources (since we already have many free resources already and graphics tutorial are a lot more accessible than RM-specific coding tutorials).

Hello actually I used to make JS blog posts back in the day and there was a JS guide by Trihan as well. Additionally we have JS documentation for MV & MZ.

And we even have autocomplete support to help with programming as well.

Do you all want coding tutorials written or in Video format?

Do you want to do a GREAT REAL service to community?
Teach people with a flowchart how the engine work, with the various function calls.

This thing alone will grant people 80% of the knowledge base they need.

Sounds like an interesting idea; if you wanted a breakdown like that Double X does deep dives on these things.

Rubescen
Thanks, google for putting together a random pixel art Olympics game in your logo that puts everything I've ever done to shame in pretty much every aspect.
21 minutes ago ••• 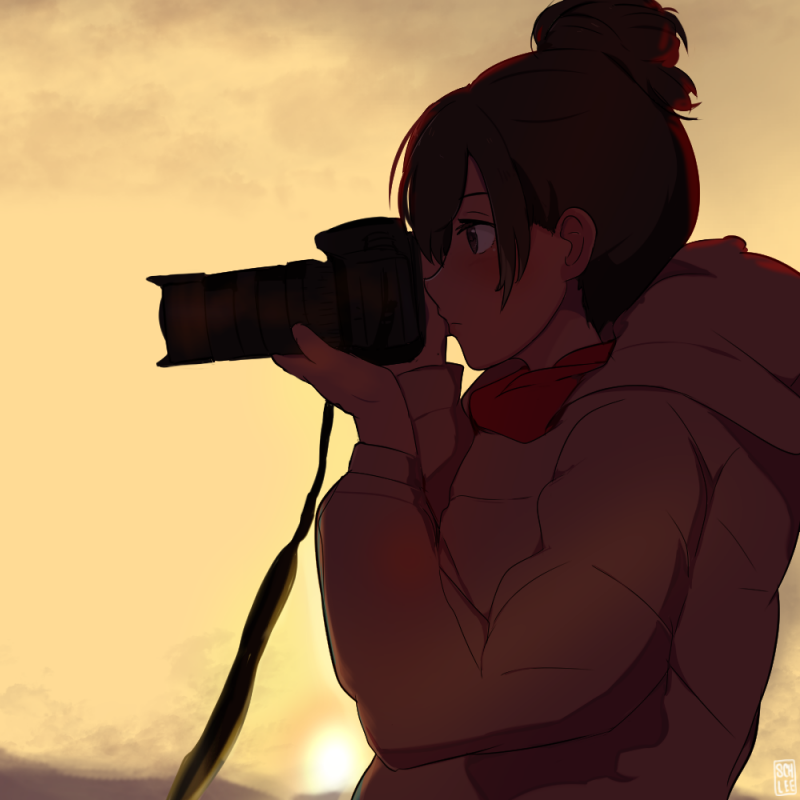