Let's talk about escaping from battle

Since I'm making a really hard game, I give players a 100% escape rate. If the player knows he is going to lose, might as well not waste his time. The game is already frustrating enough as it is. You can't progress unless you complete every battle, so they will have to come back and win at some point.

Depends on the experience you are trying to create.

Dungeon Crawlers with random encounters need a failure rate of some kind, because of the purpose of dungeons in those games is to whittle down the player's health before reaching a boss. The difficulty is broken if you had 100% escape rate. For games with touch encounters, a very high or certain escape rate makes sense if the challenge is based on individual battles.

Personally, I like how Persona 4 handled escaping. It's certain, but it might take a turn or two. Requesting to escape doesn't forfeit your turn either.

I also like the idea of using consumables items for escaping, especially for games that encourage preparation between dungeons.

For me, escape ability is mandatory. But escaping by random chance (even if it's based on the party stats) is not intuitive.

But before talk about that, we have to ask about the philosophy of battle in the game first. Does regular battle serves as a "filler", or does it have specific purpose, like a quest requirement or a forced event by the developer as the part of the story. And I'm not saying a filler battle is bad here, it's a design choice.

If a battle acts as a filler, like random encounter when the player is walking from point A to B, then 100% escape chance will be fair. Afterall, the player didn't ask for the random battle, why punish her more with random chance escape? A bit out of topic, I've tried a very interesting mechanic about "escaping a filler battle" on Evenicle. If there's some gap between the party's level and the enemy's level, there's an ability to "autowin" the battle without even entering the battle scene. It's a very interesting mechanic rather than forcing the player to wipe weak enemies in a single move or the need to click the escape button.

On the other case, let's say a player intentionally start a battle by approaching an visible enemy. Then the act of escaping should be intentional too. She asked for it, so she deserved it . Some kind of QTE-based escape mechanism will be fair. The variables of QTE (e.g. the given time to press the correct button) could be static or dynamic (e.g. based on level, agility, luck, %HP, or anything). The point is, the player needs to earn it, not just by a random chance. Even on the moment where the developer challenges the player with a boss battle, a chance for the player to retreat and rethink about better strategy will give more immersion for the player.

In case of visible encounter, I fancy the backtrack method, to put the player several steps before the encounter start and give a very short time pause for the enemy before it does its routine again.

But again, it goes back to the overall game design. As long as it's fair for the player, I personally think any kind of escape is okay.

TheoAllen said:
> How do you deal with escaping from battle?
Click to expand...

100% success rate. Precisely because I hate being stuck in a fight, it ruins the game. And even worse, during a puzzle.
I even think we should allow the player to escape some boss fights. Especially in games where you have a game over when you lose.


TheoAllen said:
> If you're using visible encounter, what happened to the map encounter event after you escaped the battle?
Click to expand...

The same as when you beat him. It's stuck until we change the map. The difference is that when you beat him, you can get through it. Before, I used to push the monster back until I realized that it was annoying to have to start a fight again directly because the monster comes back to you. brmlmblmrlglgmr.

I have the default escape and special auto-escape skills. Some characters have auto escape, for example the ninja class skill Smoke Bomb or the alchemist's mix Smokescreen, or the choco-choco summon's Ride to Safety. If the party has no access to any of these skills, they have to use standard escape.

I recently played exit fate. aside from traditional escape, the game has bribe (in short, you pay gold for guaranteed escape). what makes it different though is that bribe happen before you teleported to battle screen

it's a small detail but a huge difference in the gaming experience. the moment you use bribe is when you didn't want to do encounter anyway, so it gives you escape and skip all the transition hassle.

no transition when you are doing puzzle/exploration is a godsend 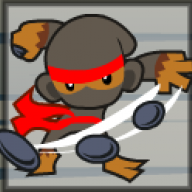 I generally use the standard escape function to allow players a chance of a way out if they encounter a battle they can't currently win, or don't feel like fighting. Certain characters, however, also have special 'escape skills', which allow for a 100% escape rate all the time, but cost MP to use. (escaping through a portal, using super speed to run away etc., my game is about superheroes.) Escaping by any means, of course, means you don't get any EXP or other rewards from that battle, so if you use it too much you'll be underleveled for the boss fight that's coming up, which you have to beat in order to progress in the game.
You must log in or register to reply here.
Share:
Facebook Twitter Reddit Pinterest Tumblr WhatsApp Email Link

Orex_
Do you Find Tilesetting or Looking for Tilesets/Plugins more fun? Personally I like making my tileset for my Game (Cretaceous Park TM) xD
Today at 12:55 AM •••