The idea came up a long time ago when I notice this :

Fanart by Rueken / Harusame
There's a lot of beautifully drawn Elona fanart by her.

About Elona - Eternal League of Nefia
https://elona.wikia.com/wiki/Elona_Wiki
The original game itself is a roguelike RPG with a lots of hilarious content and mechanic. I'm a big fan of Elona, thus I came up with the idea to make a fangame dedicated for it.
----

Living in Yowyn
The idea is just like "another harvest moon like" game, but with "badass" touch. I mean there will be mafia, murder, deception, faction and such. My intention is to make a game about social survival. At least that's the concept.

The World of Irva
In this fantasy world, there's strange fogs (like radiation) brought forth by the eastern wind that causes any living being to mutate, grow violent and mad. This phenomenon is called Etherwind, and it occurs at least once a month. Although it's as dangerous as it sounds, the people can't deny that the ether disease is also a blessing to their land. Of course crops and breeds that grow in a matter of days can't be a bad thing. Business is always thriving in Yowyn.

Back Story
Two sibling tired of living a scum life in Rogue's Den Derphy. Both finally decided to ran away and planned to start a new life in Yowyn. But changing lifestyle from drug addict to honest worker is not that easy...


The Sibling
The Little Brother and The Big Sister. They can't help but to be a part of society to survive on their new live in Yowyn.

Affiliation determine which group you are currently belong to. What kind of people you started to hanging out with. It's not something for you to decide, but society will always judge you by the kind of friend you have made. 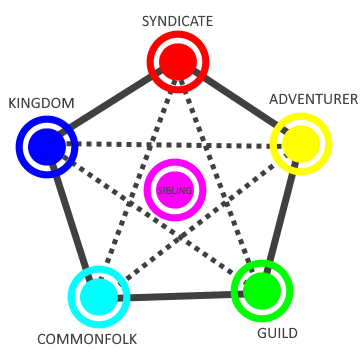 The straight bold line mean this faction can't do anything against the other's end.

The Sibling start from being the part of The Syndicate. Their affiliation is ever changing whenever they are doing a big favor to one who belong to the part of the society group.

Reserved for later
List of Ideas for the Game Feature

Reserved for later
Reserved for later
Fair reminder that this is all still just an old idea of mine that I have been working on for long time. I am afraid of letting it rot in my archive, so it's better to just share it. Whenever I have the mood and the time, I will probably update this thread. 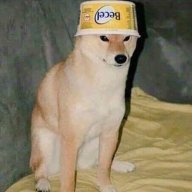 Not too familiar with these kinda games but I like the way your idea sounds I'm not too fond of the still time idea, but I guess that if it turns out more like a Devil Survivor game it'd be pretty good-- and in the end, we all have our likes and dislikes, so I'm just saying o/

The thing I like the most is probably the faction idea. I really like games with those and hope you can execute it pretty well ^^

Sound Great on the ideas! I will wait when you show me more detail. Good job on creating a detail on Social Structure.

I don't usually play harvest moon type of games, they're not usually my type, but I really like how you've thought and planned the game out!

I've just got one question, about the affiliation system, can a single character have more than one of those, or is it one per character? How are you planning that out?

I probably won't play this in the future, but still good luck with it!


atoms said:
I've just got one question, about the affiliation system, can a single character have more than one of those, or is it one per character? How are you planning that out?
Click to expand...

The affiliation only mean to determine which group you hang out more to. There can't be neutral or multiple affiliation you can side with. But then you can always switch side with consequence... And although I mentioned able to control two character, both represent "The Sibling" as in one family. They will share same relationship and affiliation status. Both will be responsible for what the others are doing.
Last edited: Aug 13, 2018
You must log in or register to reply here.
Share:
Facebook Twitter Reddit Pinterest Tumblr WhatsApp Email Share Link