So guys, what about Hand Crossbows? Potentially dual-wielding 2x 1H Hand Crossbows? How would reloading work for a DW Arbalist? Just make it reload both weapons in a single reload action?

I would. There comes a point when you gotta consider fun factor over mechanical realism. If I had to use up two potential actions to have a dual wielding Arbalist reload, I'm just not gonna use dual wielding at all. 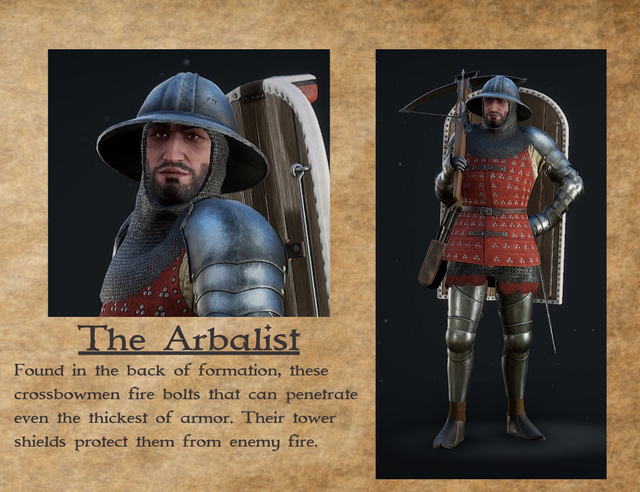 I just thought of a cool passive skill for the Arbalist. If a 1H Crossbow & Shield is equipped, the Arbalist automatically Guards while reloading. ^.^

if you want to be poetic about it, the crossbowman was despised by professional soldiers and nobility alike, because it required virtually no expertise to operate a crossbow, while still being able to bring down any kind of armor, especially when shooting from a fortification.
at least longbowmen had to be physically fit to draw a longbow.... crossbowmen used mechanical aid. 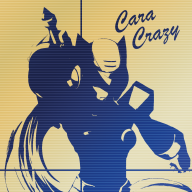 So guys, what about Hand Crossbows? Potentially dual-wielding 2x 1H Hand Crossbows? How would reloading work for a DW Arbalist? Just make it reload both weapons in a single reload action?
Click to expand...

You can ignore the fact that crossbows require reloading and go to a full unrealistic setting, but pretty cool, like the Diablo 3 Demon Hunter which shoots from her dual wielded crossbow like a machine gun.

The Stranger said:
Not sure how I'd really translate that into an RPG, tbh.
Click to expand...

I'm actually doing this in my revamping of Battle Castle. Bows and crossbows have to be reloaded after each shot, however:
Bows have a quick draw, and full draw. The quick draw takes a turn, while the full draw takes 2 turns and gives a damage boost. Bows penetrate 25% of an enemy's armor.
Crossbows can only be reloaded by cranking, which takes 2 turns but they penetrate 75% of an enemy's armor.

This discussion reminds me of a story I heard from a member of a reenactment group a few years ago. Apparently, he got a crossbow that he wanted to try out. He shot it at his garage door to be safe. The crossbow bolt went straight through the metal garage door and embedded itself in the boot of his jaguar (car). [I think that people in the USA might use the word "trunk" for the boot of a car.]

It seems projectile weight has a profound impact on velocity/energy/momentum, and thus damage.
I wonder what would happen if they shot a heavy arrow out of a modern crossbow?

Didn't yo party consist of like, three dudes? If one of my dudes was an Arbalist, and I couldn't shoot every other turn, I'm gonna always choose the longbow dude instead. So please lemme do something cool and useful during the turns I can't shoot my crossbow!

alice_gristle said:
Didn't yo party consist of like, three dudes? If one of my dudes was an Arbalist, and I couldn't shoot every other turn, I'm gonna always choose the longbow dude instead. So please lemme do something cool and useful during the turns I can't shoot my crossbow!
Click to expand...

Imagine that an Arbalist, while reloading, is just charging his next attack, like a monk using focus to deal double damage in his next turn.
However, I have to agree that having a mandatory reload every turn is a bit restrictive gameplaywise. A monk doesn`t need to reload before each attack, and you as a player may choose to charge the next hit or not.
Games are all about choices, and removing this choice seems not very interesting.

CaRa_CrAzY said:
Imagine that an Arbalist, while reloading, is just charging his next attack, like a monk using focus to deal double damage in his next turn.
Click to expand...

Yea, I think I've never used any kind of monk's focus ability ever, either.

Can we have like, a li'l squire for the Arbalist who potters around, crankin' the wheel for the Arbalist's crossbow during the off-turns? And while the squire's doin' that busy-work, the Arbalist can go whack the bad guys with a steel baton? I know that's not gonna work in @Frostorm's game, 'cuz of the movement thing, but otherwise I think it'd be fun. You could name yo squire yoself, and give him a cute hat with a pink feather 'n all. And if the enemy knocked out ya squire, the Arbalist would hafta do the busy-work himself.

So this is just personal taste but if I were to be playing a game with a class who's main mechanic is to be able to do anything once every 2 turns I would either like to have that 1 turn be really hard hitting, more so than the other classes, or have an option to opt in for a weaker move that I can use every turn and use the more powerful attack whenever I felt I had a good opportunity.

Not having an action is flat out not fun. It's usually why I personally never use Slaking or Giga-Impact/Hyper Beam in pokemon. Even if they might have situational strengths I just don't like not being able to do stuff. But in a tactical game with multiple characters if one of your guys is a living nuke who can take out foes or damn near take them out from range it can be tolerable.

It's always a hard balance between realism and fun.

VegaKotes said:
Not having an action is flat out not fun. It's usually why I personally never use Slaking or Giga-Impact/Hyper Beam in pokemon. Even if they might have situational strengths I just don't like not being able to do stuff. But in a tactical game with multiple characters if one of your guys is a living nuke who can take out foes or damn near take them out from range it can be tolerable.
Click to expand...

Slaking is a mon with a BST that can rival legendary Pokémon BSTs. Plus it shines in double battles if you have something with Skill Swap to trade abilities with Slaking.

Hyper Beam and its variants are meant to be used as finishers. That turn of recharge can bite you hard in competitive. Fine to use however you want for in-game though.

Yeah, I would advise against forcing the player to wait a turn for the Arbalist to reload. To better fit the fantasy of a Ranged Burst DPS, you can have one or two "heavy damage" skills that have pinpoint accuracy and Armor Penetration, but they go on a pretty long cooldown when used. In the meantime, you have several other debuff skills that butter up the enemy so you can take them out with one precise shot. Hand Crossbows could instead emphasize the "debuff" portion of the kit, transforming the character into more of a defensive class that keeps the enemy weak for the other damage dealers. Crossbows are very simple mechanisms that do most of the work for you, so I'd assume that they can't land critical hits very well, and rely more on heavy base damage than stat scaling.

I don't know if your game has Shortbows or not, but if so, then I can assume that the slot for a multi-hitting / status-inflicting ranged class is already taken. A Longbow Archer could perhaps be a Critical Hit specialist with "Fletcher" skills that augment their arrows in some way. Poison Arrows, Fire Arrows, whatever fits the situation. They could also have a few extra self-buffs that improve speed, accuracy, crit chance, and maybe a "Death Blossom" skill that sacrifices accuracy and critical hit chance in favor of making your attacks hit multiple enemies.

Do you guys think Handbows (1H Crossbows) should require reloading as well?
I'm wondering how it'd work if someone dual-wields 2x Handbows...
It would be the only way a ranged physical DPS can Dual Wield. 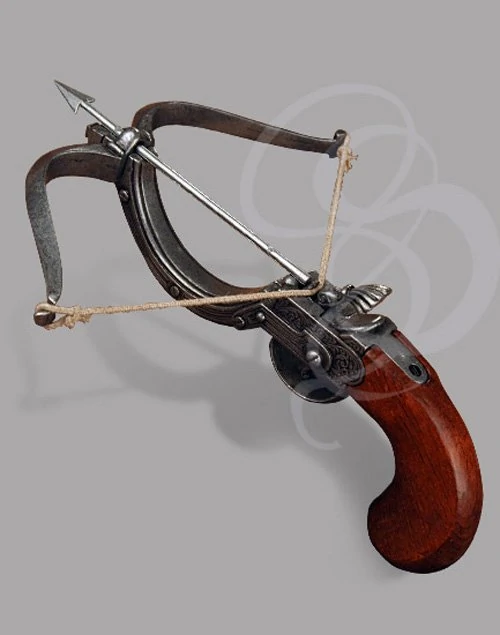 Edit: I think I'm just gonna make it so Handbows don't require reloading, as unrealistic as that may be. Since the whole point of Dual Wielding is to dish out more hits in the same timeframe, a reload mechanic would be counterproductive, imo.

Edit2: I didn't want to double post so...
What are some differences between an Archer & Arbalist besides damage output and speed? For instance, which class should focus more on slowing/immobilizing targets? Or, what other specialties might each class offer?

I wanted to give the Archer a certain skill or 2 that does the following:

Steady Shot (v1) - Deals moderate damage. Guaranteed to Crit if the target is immobilized.
Steady Shot (v2) - Deals more damage based on the difference between the user's & target's Speed.

Well one suggestion for crossbows is a type of Chinese variant known as the Chi-Ko-Nu, a type of repeating crossbow that works sorta like a semi-automatic rifle. a Chi-Ko-Nu could do fewer damage than a normal crossbow but can damage multiple times per turn.

Frostorm said:
What are some differences between an Archer & Arbalist
Click to expand...

an archer can't hold a bow drawn for more than 5 seconds.

To make that relevant to a turn based game design, perhaps arbalists can use an Aim skill to increase accuracy/critical chance.

I'd like a quick opinion: Should "Trueshot Aura" only affect those that are using ranged weapons? Or should it affect all units, provided they're in range? I haven't fully decided on the specific bonuses it would grant yet, but it would be something along the lines of +Hit% and/or +Crit%. Unless someone's got a better idea...

Cuz like, what are the chances a player would use more than 1 Archer/Arbalist at the same time? Not very often, imo...

So I was wondering, you know how there are Longbows and Recurve Bows? Well, how come there aren't any Recurve Longbows? As in a 6ft+ bow w/ recurve. The closest thing I could find to such a thing is the Japenese Yumi (this one is 71", so just shy of 6ft). Even then, it's got a rather mild recurve. 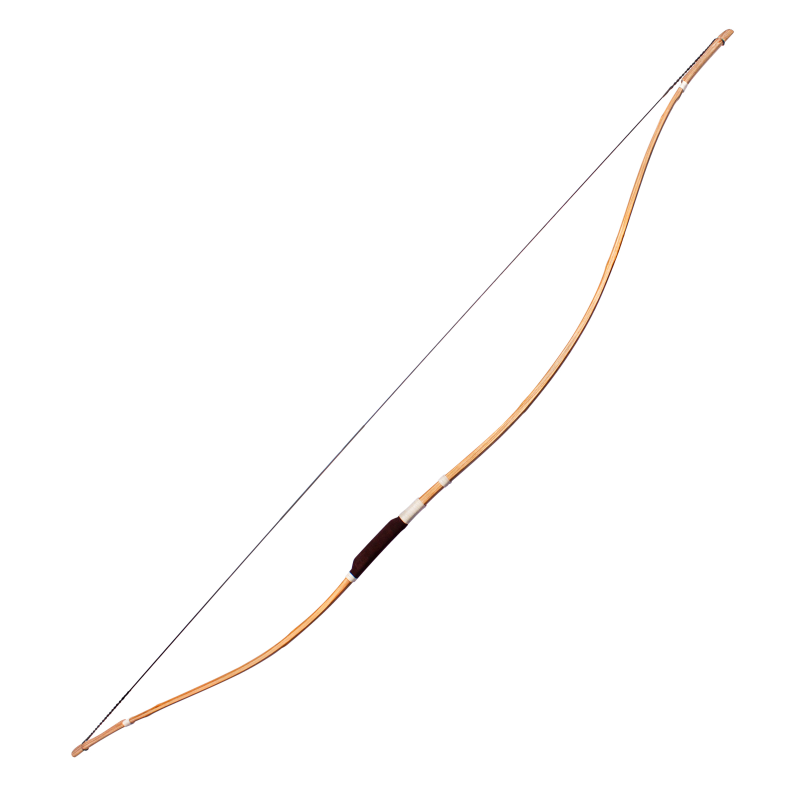 Tai_MT
Historically, "honor" isn't what has won fights. Being as brutally dishonorable and malicious as possible has done that. This is a tactic that works for any fight. Honor doesn't matter when you're the loser.
34 minutes ago •••

Mcniner Umbriel Mcniner wrote on Umbriel's profile.
Hello! It seems the Zelda sprites you sent me were removed by a moderator. Could you gmail them to me here: steinjaltman@gmail.com? Thanks!
Yesterday at 11:59 PM •••

Froggo32
Went to see Jujutsu Kaisen 0 yesterday, it was cool. The movie wasnt really a masterpiece, it had some pacing and characterization problems, but overall I enjoyed it, maybe because it was the first anime film I have ever been to in the cinema lol. The battle animation & music were top-notch. I havent seen much of the anime so people who watched the entire season would probably like it more.
Yesterday at 4:49 PM •••