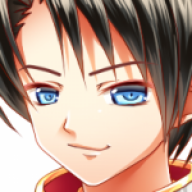 Howdy, everyone! I'm Admiral Styles, creator of Love and War, as well as a few other little things like C'est Lavie and a StarCraft campaign or two (but never mind that). I'm here today because I'm seeking a few good team members for my latest endeavor, a new RPG set in the LAW universe! The intention is to make this a commercial game after a successful crowdfunding campaign, so if you think you might be interested in joining Team LAW, read on!

Without giving too much of the setting away, I can say that this is intended to be an RMVX Ace RPG starring a character from LAW, fun loving teenager Lavie Regale. She'll be going on a magical adventure within a dreamy fairy-tale land, meeting colorful characters and getting into and out of a whole bunch of trouble... and all this, without ever leaving her room in Davenport! Action, humor, and a touch of romance will all be important elements. Those who have played Act I before will recognize some familiar faces, but no prior knowledge of the series will be required.

Some specifics: this project is intended to be a shorter game, roughly around 2-4 hours in length. It's also intended to be the first in a trilogy of similar-length games, if the first one is well received. Those applying for jobs are not required to stick around for the whole series, if you don't want to - it would be wonderful if you did, but if you would prefer to limit your participation to just "Chapter 1", then that's fine by me.

Here's a quick look at a couple enemies that Lavie will be encountering:

This brute is looking to pump Lavie up! Possibly by beating her down, which is not ideal when it comes to workout routines.

This is Two-Tale-Fox. He's a cool guy, but you can be sure that when he recites one of his stories (he only knows two), he'll inflict Confusion upon both allies and enemies. Yup.


Urgently Needed:
1. Battles/Gameplay Guru: I know my strengths and weaknesses, and one thing I struggle with are implementing fun, challenging battles and gameplay systems. This person will be in charge of game balance, seeing if my gameplay ideas are possible or entertaining (and if not, we toss 'em and try something else!) enough to implement, and overall ensuring that leveling up and battles are fun for the player.

2. RMVX Ace Battle Scripter: This may or may not overlap with the above, but I do want a side view battle system (ah, the old Custom Battle System of yesteryear!), and I believe such requires the use (and more importantly, the understanding) of various scripts. Do you understand this scripting stuff? Maybe this position is right up your alley, then!

3. Minigame Maker: I have ideas for fun little minigames, but don't have the know-how to actually put them together. There will probably be three or four in total, intended to be simple but fun.


Helpful, but Secondary:
1. Mapper (Parallax): I currently do have a mapper, but having a second one onboard would certainly help lighten the load and get things done quicker. We will be using parallax mapping for this project, so knowledge of that technique is required.

2. Composer: Not urgently needed just yet, but I do hope that this project will ultimately get its own custom-composed soundtrack.


Send me an e-mail at ofloveandwar@hotmail.com or a PM, and let me know what position you're applying for, what sort of monetary compensation you'd be looking for, as well as whether you'd be interested in sticking with the entire series, or just the first chapter. Please have examples of your work ready to show. I will wait for at least two weeks before making my final decision on team members - longer if need be, of course. Once the team is assembled I'll add up all the costs, determine the figure we need to shoot for, and launch the crowdfunding campaign shortly thereafter (probably using Indiegogo or Kickstarter).

It's been a long time (longer then it should have been, thanks to the machinations of "real life"!), but hopefully now I can return to LAWmaking. If you have any questions or comments - perhaps a detail that needs clarification, or maybe you have a skill to offer that I didn't list but could prove useful, send me an e-mail too, at ofloveandwar@hotmail.com. I look forward to hearing from you!

Ah, just a bit of a bump, as the post was stuck in the moderation queue for a while.

My questions is what resources have been put into the project so far. It's always nice to see a project that has been considered beyond the conception phase and has received some production assets.

Even without production assets, I may be interested. We'd have to talk.

I can probably fill all the roles you need. However, for Battle Scripting I would suggest getting someone who knows how to set up one of the side view battle system scripts available and then have them modify it where needed.

For the minigame position. What exactly do you mean by that? Are you looking for someone to actually create the minigame, events and mapping?

Titanhex: So far, a lot of the artwork has been completed (meaning cutscenes, facesets, monsters), and a good start has been made on building a tileset, with a couple of maps ready as well. Definitely, get in touch with me, let me know those details.

Codycarol95: Yes, that would be pretty much it.

I wouldnt mind helping out a bit with minigames then, sounds fun.