Hiya~ I'm working on a project with a small team currently right now that is making a game based on a vocaloid song series called Synchronicity. We are looking for someone to do 32x32 sprites for the main characters of the series. Adding custom tilesets would also be a plus, but not a necessity. The project is currently in the early stages and we have just finished planning out the story and have started work on scripting.

Synopsis: Synchronicity is a story that takes place in a quasi-medieval period. It tells of twins who were separated shortly after they were born. The reason behind was that one of them (Rin), was chosen to be the next Diva, and her destiny is to sing for eternity to keep an ancient Dragon in its slumber. After Rin's brother (Len) was old enough, he began searching for his sister, to free her from her fate of being a Diva.

Thank you for any help offered in advance! 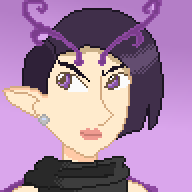 Tai_MT
Microsoft: Hey, let's waste money advertising the Xbox Series X when nobody has any in stock, we don't seem to be making more, we aren't taking preorders and you can't get on a waiting list. BEST. IDEA. EVER.
Yesterday at 2:28 PM •••

PixeLockeT
So I'm practicing ITC with a spirit box, and decide to try to contact my deceased soulmate. It actually gave me multiple identifiers. Me, still a bit skeptical, asked aloud "Fine but does he still love me?" and the box spoke and printed the word "Forever" at the same time. Been a mess of tears since.
Yesterday at 10:22 AM •••

Guardinthena
Been scratching away at my game and making progress, but just had a revelation. I'm working in full screen and adjusting all my pictures accordingly, but will they resize if someone's screen is smaller?? I hope this doesn't turn out to be a problem later.
Yesterday at 8:50 AM •••