Lost Cavern
​
Hi folks, I posted earlier today in the "Introduction" section, but briefly: I'm back after almost ten years! I put literally hundreds of hours into this project back then and never shared it with anyone. I thought it was lost after my computer crashed, but recently I found a stray copy, so I re-purchased RPG Maker VX and have been playtesting and putting some polish on. I've got several hours of gameplay, but most of it still needs more playtesting and polish. In the meantime, here's the first 15 minutes or so. Enjoy!

For nearly fifty years, the people of the Caverns have lived in safety, far beneath the surface of the world. Now their way of life is faltering, and a few young people are determined to find the surface again. But what will they find when they get there?

For 47 years, the people of the Caverns have lived in peace. But now famine and monster attacks are turning town against town, friend against friend. Meanwhile, one young boy believes he has found the way back to the Surface--a way lost ever since the First Explorers destroyed all their own maps. For our own protection, they said.

That boy, Toby, ran away five years ago with a few of his friends. They made it far--surprisingly far--but when the others turned back, he kept going, and he has not been seen since.

With conditions in the Caverns worsening, Toby's best friend, Fiona, believes that their only hope lies in following in Toby's footsteps, recreating the route that he had pieced together, and following him to a Surface--come what may.

This uses VX because that's what I used back then. I wish I could import it to a more modern system, but hey, it works.

* Yanfly's suite of VX improvements, including all the core Engine stuff as well as his system for improved leveling. This allows you to choose which skills you learn and when, as you gain Job Points (or "Power" in my game's lingo) with experience and spend these points to learn new skills.

* Modified Active Time Battle System
For this, I started with Rokan's ATLBS v2.12 and modified it. Changes include...
--- All battlers move down the timeline at the same speed, so that you can see exactly who will go when. Higher speed/agility doesn't make you move faster along the timeline; instead it determines how far down the timeline you get bumped after taking an action. Slow characters or actions get kicked pretty far down the timeline after they go, so it's longer before they go again. Fast characters or actions don't go as far down the timeline, so they act again sooner.
--- Skills can each have their own speed (modified by the character's speed) and I moved around the UI a bit so you can see the timeline as you're choosing your skill, which lets you make more educated choices about what to do. This becomes a big part of the tactics, as some skills also let you move other battlers around, delaying your enemies or hurrying up your allies.
IMAGES/SCREENSHOTS 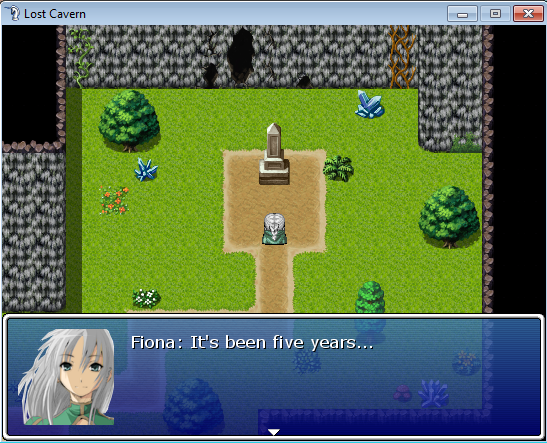 Our adult protagonist is reflecting on the events of five years ago, when she lost her best friend. 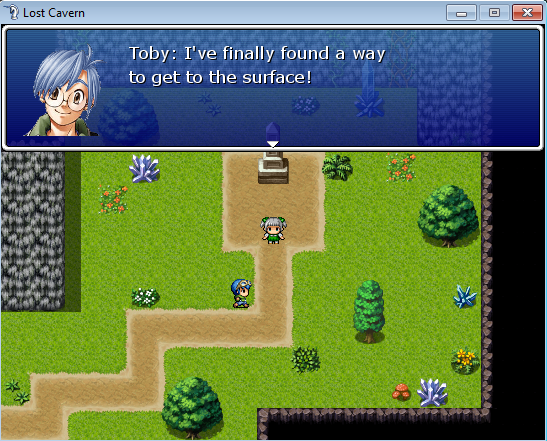 Now we move to a flashback, where a young, aspiring explorer, believes he has found the way back to the surface. He will never return... 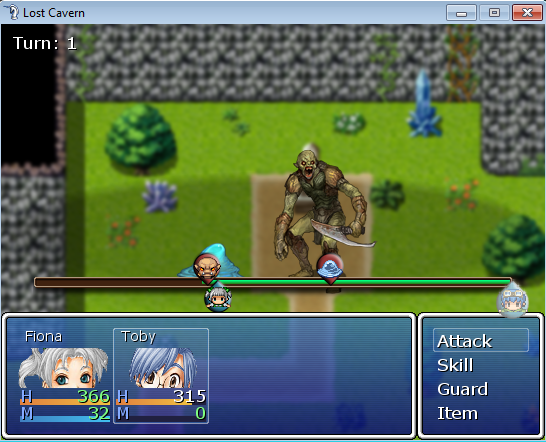 You can see the Active Time Battle System here, with the little icons showing when each character will act, and the green bar showing how long your currently selected action will take. (The action happens right away, but the bar is the delay before you get to act again.) 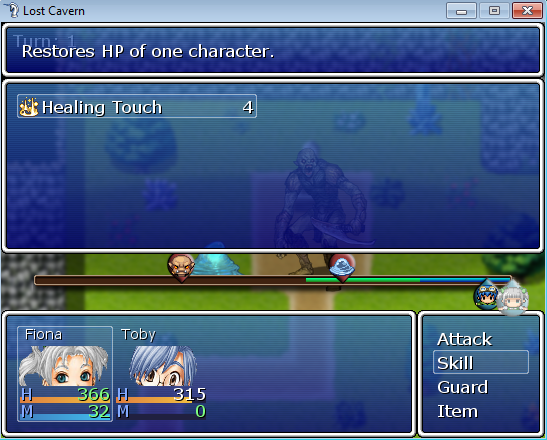 I gave each skill its own speed, and changed the timeline to stay visible while you're picking a skill to use, so you can see how long it will take. This involved moving some things around a little. Two areas of improvement I'd still like to get in this one:
- First, I don't love the timeline now being at the bottom of the display, as it partially obscures some of the monsters. I'd like to get help from a more code-savvy person to move around the UI elements so that it can be visible at the top of the screen
- Second, note the blue section of the bar? That's the "Channeling" time, which means if Fiona selects that spell now, it won't activate for a short delay while she channels, or casts, the spell. Only THEN will her normal delay start. Unfortunately, this is a bit misleading, because her next action will really happen at the sum of the blue and green bars showing, not at the end of the green bar. I still need to figure out how to get the forecast to show the sum of both the normal delay and the channel time, so that it accurately communicates to the player when the character will go next. 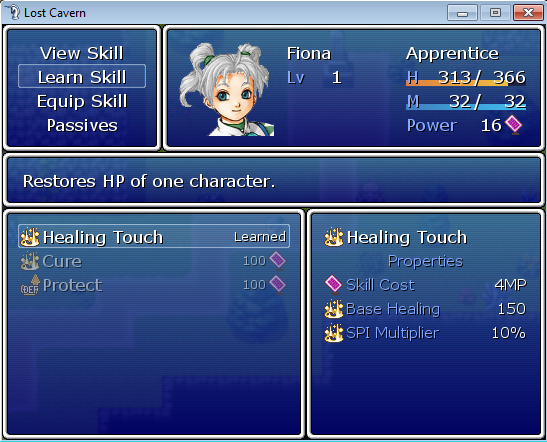 Here you can see Yanfly's character growth system. As you level up, you don't learn skills automatically. Instead, you gain "Power" points, and you spend those to learn new skills. Right now, young Fiona has 16 power points; when she gets to 100 she could purchase a new skill.

Gameplay takes place over two timelines, the main timeline and the "nostalgic" timeline of five years ago. The main thread carries the story, while periodically play jumps in flashbacks back to the events of the characters' childhood. Each character has two versions, then: the adult and child versions.

Our storyline opens with Fiona going to the monument outside of town to remember her friend Toby. The monument was built to commemorate those who lost their lives on the journey down to the Caverns, but she is here to remember one who was lost trying to find the way back up.

We immediately go into a flashback from five years ago, where we meet all four protagonists as children. We see Toby's enthusiasm, Axel's blunt charm, and Anna's wide-eyed innocence (an innocence which will not last.) The children must survive a terrible monster attack to get to the safety of the Generator building, but Toby insists on saving his maps before they seek safety.

That's where this short demo breaks off. When the next bit is posted, we will continue with the adults again. We will learn that Toby hasn't been seen since those events five years ago, and that that night was the event called the "Second Wave," the second terrible monster attack. People are worried what will happen if there's ever a Third Wave. Could the Caverns even survive?

Meanwhile, it seems that a neighboring village has taken to banditry, stealing from their own kind--something unheard of in the Caverns before. With conditions getting more desperate, Anna, daughter of the Mayor, is charged with travelling to a Grand Council to address these problems. Axel is charged with guarding her, and Fiona invites herself along, informing all involved that she is on a quixotic journey to find the route Toby took to the surface.

The journey to the Grand Council will prove more dangerous than anyone anticipated, and even if they make it, will the Council allow Fiona to continue her quest? Or is returning to the surface a Pandora's box that's too dangerous to open?
SECTION D: SETTING AND/OR WORLD DEVELOPMENT

The world of the Caverns is one that is full of ancient mystery and present wonder. It is a beautiful place, with Crystals and myriad underground life, but many questions underpin life in the Caverns. Why are they here? Why did the First Explorers flee the Surface, so long ago? And why did they destroy the maps that would have let Cavern-dwellers return?

Furthermore, life in the Caverns isn't going as well as it once did. All the efforts of the First Explorers were unable to prevent the Monster Wave that destroyed many outlying farms and villages and claimed many lives. Five years ago, a Second Wave caused yet further destruction. Crystal--a once-abundant natural resource necessary to power the Generators that make life possible in the Caverns--are becoming increasingly scarce. Without Crystal, there isn't enough energy to power the great lamps that shine on the farms. Without light, there is no food, and people starve.

About half the people in the Caverns are people called "Espers." With grey hair and muted eye color, they are natural magicians--and the only ones capable of utilizing Crystal as a power source. Yet even the power of the Espers, in an underground world filled with Crystal, may not be enough to save life as they know it.

Can life in the Caverns continue? Or will they be forced to return to the Surface, and risk whatever it was that their ancestors fled from? Or should they turn the other direction and delve deeper, and risk the darkness that myth and legend holds lies below?
DOWNLOAD LINK

Here's the link to the Dropbox files. This does not include the RTP, but assumes you aleady have that installed. As I said, as I keep polishing the existing material, I'll post more. Comments and feedback are welcome!

Is this game inappropriate?
(Random question....)

No, not at all! Nothing against games of that sort, but this one is very family friendly.

Hi Folks, I've polished up the rest of Chapter One! I'm excited to share this with you, as I think in this chapter it really starts heating up. Here we return to the current timeline and find out what's going on with our heroes five years after Toby's disappearance.

I updated the original post to make the download link available for Chapter One, but here it is again:

Can someone do me a favor? Would you download the file and just confirm for me that it's working? I tried to share this with a friend and he couldn't get it going. Thanks.

This is what I get. Using the chapter one file.

Thank you. Ok, I definitely need to troubleshoot...

Alright here's a new version. This one comes packed with the RPT, which seems to be what makes the difference. Let me know if you can play it!

CleanWater
I decided to create reboots of my games on RPG Maker MV. I'm happy.
10 minutes ago •••