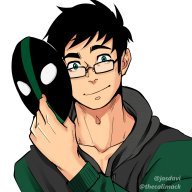 THE CALIFORNIA MACKY​
​
So I decided I'd go and begin Let's Plays of a few games. I'm still building banners and stuff, but yeah. I'll do let's Plays and Let's Reads. I'll post links to my channel once I have RPG Maker vids uploaded.
I'll be making a few short episodes of some of the games in the RPG Maker community.​
Now, I have a list here, but you're welcome to make suggestions and recommendations. Whether I make video Let's Plays of them or not depends on how smooth it will run on my computer, and if the game itself will have copyrighted material (That involves ripped songs or sprites from other games. I know it's hard to gather resources, but we gotta respect original creations.). I can write a written review by request for your game, too (regardless of copyrighted material), and maybe a quick video review instead of a Let's Play. All links will be provided in this main post so just look into this one for the lists.

The focus of my channel was intended for dating sims: gay, straight, and lesbian, or whatever there is, and it's because they run smoothly on my pitiful system. But then I remembered how RPG Maker can be powerful while using smaller rounds of RAM and VIdeo Memory. Plus stories tend to be unique and diverse. SO! I am aiming to promote RPG games and good stories to the world of Youtube.

So here's the list of the RPG Maker games that will begin and be ongoing soon. I'll probably plan five every month or so, depending on my free time. (These include games from similar programs like Wolf RPG Maker):

1) Alice Mare (because I've never played it before)

2.A ) Friend (the minimalist-art-style one)

3) Yanderella (once I find it)

4) Ib (I torture myself, sometimes)

Now, about these Let's Plays


Reviews will be given in the videos themselves if I ever post the Let's Play in my channel. We'll post more content soon so just feel free to drop by.

You can also leave a message or a comment at my channel (Discussions tab) regarding a suggestion or your thoughts. Links here will be posted as a link to the lone video or the playlists to the games.

Don't be too afraid to recommend a long RPG game. I pretty much grew up with RPG's (Pokemon and Final Fantasy). Just remember that I'm entitled to my own opinions, but I'll put them nicely, yeah? (unless you want me to be mean )

But there's a certain quality that I can only stand, too. So heads up.
HOW TO STAY UPDATED?
1) Subscribe to my channel