Event > Page 2 > Set Movement Route > Change Opacity, Change Image, or Transparent On
Either will work depending on the effect you want, hope that helps a bit

What do you mean by "transparent"? Completely invisible, or just partially?

If you want to remove it altogether, you can use Change Graphic and set it to None (also in Set Move Route), but if you want it to be see-through, use Change Transparency. If this is an event that you can see before the cutscene and you don't want to see it at all after the cutscene, add a second event page and condition it by a switch, don't give it a graphic, and turn the switch on when you want it to disappear. 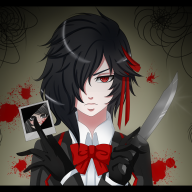 Here is a more detailed approach, especially for players who are new and STILL looking for a way to figure this out (a.k.a. need more details)
1. if you want to use Scripts but don't know how, you can use this one:
$gameMap.event(id).setTransparent(true/false);
* with this script you have to add an event id where I wrote id - and do this without the "0"s in front. In your menu it'll show like Switch id 0032 for example, just type 32, else you'll get weird results.
* in the .setTransparent function the parameter is either "true" to make that specific event transparent or "false" to make it non-transparent. They are written between the brackets, without the "" I wrote, those are to specifically show what one has to write. Additionally, since it's JavaScript and IF you are lazy, you can write 1 instead of true OR 0 instead of false. Though I wouldn't recommend.

<> IF YOU WANT TO CHECK whether your character is transparent, you have 2 scripts for that, and I gotcha covered!
For player it is $gamePlayer._transparent, and for an event you have $gameMap.event(id)._transparent.
How do you put them in? EASY! Conditional Branch, page 4, Script and just type the above mentioned.
If you want to have a script of your own in a Script Box, then use:
var transparencyCheck = $gamePlayer._transparent; or the other one
var transparencyCheck = $gameMap.event(id)._transparent;
if (transparencyCheck) {
// add your code
}
you don't have to add == true in between the brackets, because conditions only work if they are true, and it does the checking in the backgroud anyways
just work smart and win a bit of time ^^

2. Set Movement Route option is another viable one. In the event itself where you add the commands, on page 2 there is the Set Movement Route Command. On the right of that window you have some options you can use (as stated above):
<> TRANSPARENT ON/ OFF are your quickest option. Just 1 button press.
<> CHANGE IMAGE - choose an image if you want your character to change into someone else by selecting what Actor you want from the scroll list that pops up. If you want them to become invisible, then the "None" is selected by default. That's your go-to. However, if you want the character to reappear, make sure you use this option to give it back its original image (or any other associated with that character).
<> CHANGE OPACITY - this one is neat and can be used to showcase ghastly characters. Maximum opacity value is 255, any value below it makes the character image increasingly "ghosty".
For example 220 is almost like a ghost, 200 is another good example, 80 is barely visible. Play with them to make your right pick. For fully invisible use 0 here

This thread is almost 4 years old.