RMMZ Making a point and click style game and it's ALMOST working. Can't tell if this is a problem with my plugins or my events. 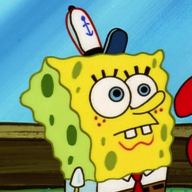 I'm making a point and click style game for one of my personal projects. I'm using MV for this because I don't know any sort of coding and I'm familiar with RPG maker to an extent (please don't suggest any other game making engine or software).
I want the game to be very similar to the Gorillaz old flash website where you interact with objects and click around rooms.
I'm using several plugins to pull this off and I have everything mostly working as intended.


Im using Galv's layer graphics plugin for the main parallax background.
The player/actor is invisible and stuck in one spot since I don't think they're really needed. movement is controlled by dragging the mouse along the edges of the screen. This is done with Magnus' camera mouse move plugin.
The only two interactable objects in the room so far are the cat piano and the computer. I'm using Mimosa mouse cursor plus plugin because it works hand in hand with the button picture plugin allowing for pixel perfect button pictures that ignore transparency.
The cat piano and computer are both separate pictures so i had a lot of trouble getting them to appear properly but I'm using Mog's picture effects to bind them to the map. Both of the objects are the same size as the background image so that they can be loaded into the top left corner and align with the background. everything but the object is transparent tho. Here's the cat piano picture as an example:

I have events set up for both of the objects. The cat piano is just supposed to play a sound effect when clicked. The computer is supposed to bring you to a different map. When I hover over the objects the cursor changes as intended but when i click on them nothing happens! if I could just get these events to work then everything would be working as intended!
Here is the cat piano event: 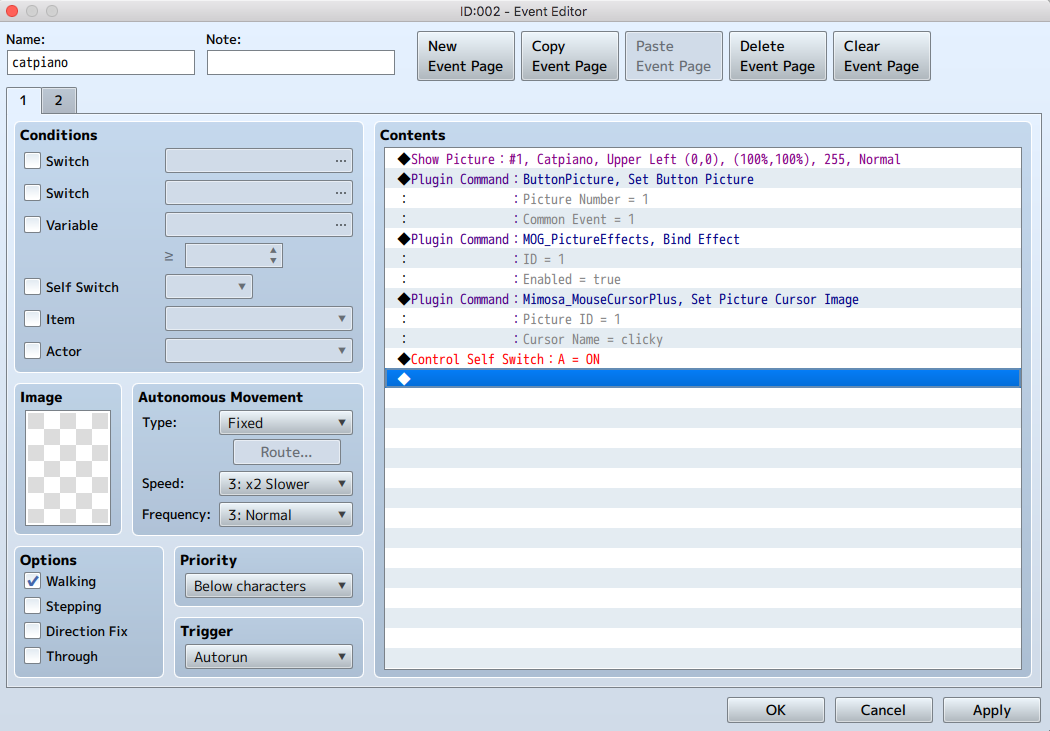 the cat piano picture is shown and set as a button picture. button pictures use common events and I have this common event set to play the sound effect.
then using mog's picture effects the picture is bound to the map so that it can move properly when the camera scrolls.
the last plugin command is just so that the mouse cursor will change when hovering over the picture.
i have the event on autorun but it ends with an empty self switch so that it doesn’t freeze anything.

what’s strange is that I've tried replacing the cat piano picture with one of the default actor images and it works perfectly as intended unless the picture position is moved too far?? I tried reformatting the cat piano image and making the file size smaller but it still doesn’t work. I'm unsure if this is an issue with the plugins or with how im setting up the events.
Thought I'd post this here as well. Here's my plugins: 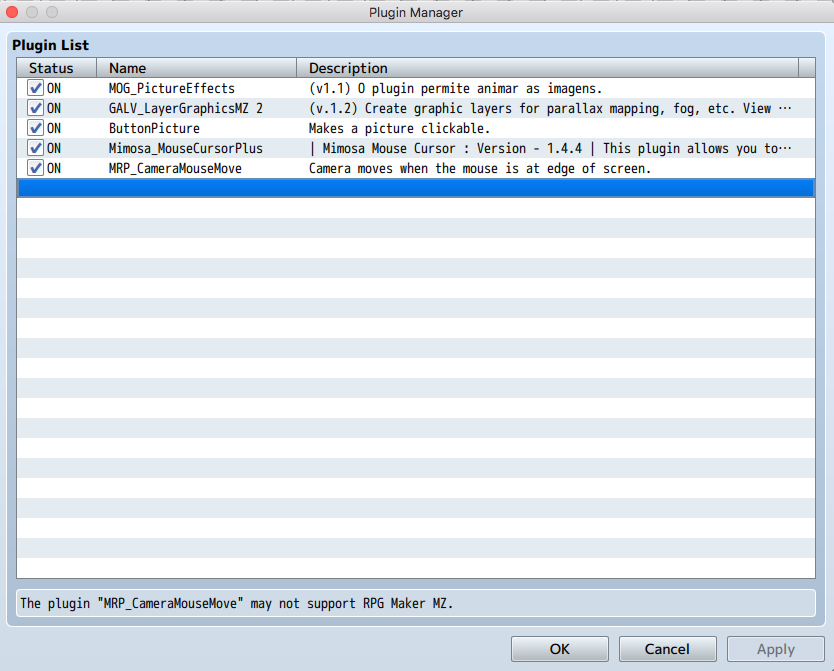 any help would be great as im so close to getting this to work!

Too many plugins I don't know about, so I don't know if I can help here, but why did you decide to use a mouse plugin instead of just having your player be the cursor? I feel like that might be easier.

EDIT: I will say, though, that your event looks OK to me, so it's probably a plugin conflict.

HexMozart88 said:
Too many plugins I don't know about, so I don't know if I can help here, but why did you decide to use a mouse plugin instead of just having your player be the cursor? I feel like that might be easier.

EDIT: I will say, though, that your event looks OK to me, so it's probably a plugin conflict.
Click to expand...

Maybe but I'm mostly planning on relying on button pictures so even if the character was the cursor it wouldn’t really matter. That and I'm planning on making my own custom animated cursors which the mimosa mouse cursor plugin is really good for.

i've been fiddling around with the plugins but I don't know any sort of coding or scripting so I'm sort of lost as to what the problem could be unfortunately. My best guess is that it might have to do with mogs picture effects? it's the only plugin I have that's in another language but I'm unsure if that matters. I'm really only using it to bind the pictures to the map and possibly animate them. I'm using this instead of a normal parallax background plugin because i need the images to specifically be pictures (because I'm using button pictures) and most parallax background plugins I've seen have you create a separate folder to store images.

still looking for help on this!

again im still looking for help with this! im completely lost as to what the issue might be 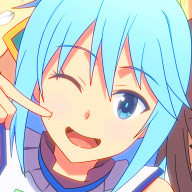 The two things I could come up with:

1. Using pictures that are as big as the background may be a problem, as even though one of your plugins is set to only "use" the non-transparent part, having all pictures over-layering each other might cause a problem when trying to activate their content. However I would than rather expect the game to freeze because of too many inputs - but you never know.
2. Seeing how the default actor bust worked until moved... maybe setting up the event to "spawn" the picture like that kind of locks it in place plugin-wise? So basically, if it is moved around by scrolling the screen, the picture and the spot where it should have an effect when clicked don't align anymore

Broliant112
the urge to comment helpful things on forum posts but not using the same engine
Today at 12:32 PM ••• 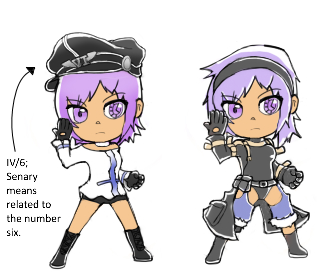 Updated Senary's design (left). The previous one is overdesigned and her lack of functional pants is distracting and undermines her as a strong female character. She now has compression shorts, shorter hair, and a loose-fitting shirt for a modern look. She was lacking the authority of her original design, so I gave her military cap with her namesake.
Today at 9:56 AM •••