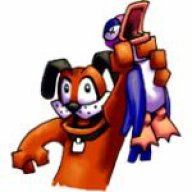 Hi! I am making a scenario where my characters are trapped in a fire maze and they have a limited time to get out. I need to know how to set a timer so if you fail to make it out in time the game ends. I also want to know to make the fire icons on the map damage your characters.

There is a built-in Timer.  What I'd do is this:

1. Create a Common Event, called "TimerExpire"    This event would have a single Condition which checks to see if the timer is on.  If the timer is on, this would end the game when the time limit is reached, possibly displaying a text message beforehand such as "The party died in the fire"

2. Set the Game timer to the desired amount of time and start the timer.  This will display the time used so far.

This way, the TimerExpire event will keep checking the time remaining.

Personally, if I made a fire maze, I'd have the maze continually damage the party, with the game over coming when the party dies from loss of HP.  This gives the player some time to think but the player would have to consider the best way to get out of the maze.

To do this, set the Fire tiles to be damage producing tiles.  So the party would take damage with each step...

Or, you could use both, but I'd say the timer would be enough if you want a game over within a time limit.
Last edited by a moderator: Apr 14, 2014

damn..your good thank you so much!!

Not to double post, But I have no idea what a producing tile is?? I am a noob at this so i need more of a detailed explanation for everything

A "damage producing tile" causes your party to take damage when they walk across it.  In most RPGs, this is something like the Poison Swamp (the purple blobs in the default tileset).  In real life, it would be like walking across, say, a section of floor which had long metal nails sticking out of it.

In your case, I think it's fair and reasonable to say fire would hurt people who walk through it.

Basically, every party member takes some damage with each step across the damage producing tiles.  So if they started with, say, 100 HP each, if the tile took 5 HP with each step, and the party walked over 4 of these tiles, each party member would only have 80 HP after walking on the tiles.  This simulates the danger of the area.

Another way to do it is to have a Parallel event (one which is executed periodically by the game itself) which checks the Region ID of the party's current tile.   If your party is standing on a tile with the "fire" Region ID, they take damage.     A Region ID is just a number, from 1 to 64, associated with the current map tile.

You set Region IDs for your map by pressing F7 on the Map screen.  Then you draw with one of the numbers.  This sets the Region ID for the tiles you select. Regions represent different types of terrain, and can be used so the enemies in random battles  match the terrain --- scorpions in the desert, yetis in the snow, etc.

Sigony
A video game has a brand attached to it.
No offence meant, but it is disadvantageous to use the default RM graphics due to the fact that they can correlate your game strongly to other RM games and whatever associations a user has with those unrelated games.
Today at 11:23 AM •••

kaukusaki
Exhaustion sickness hitting me again near deadline whyyyy (sobs)
Today at 10:41 AM •••

Conflictx3
thats it, i 've had it, I will NOT promote my game as a "retro RPG" when its done, i have in the past but it is literally the first thing on every rpg maker game description to the point that you'd think the sales pitch came with the RTP. I refuse to use that angle.
Today at 9:57 AM •••

PixelHeart
My memory is embellishing the quality of NES era game assets :/ .... I need to stop comparing my work to somthing that was groundbreaking decades ago. Especially since its not as good as I seem to keep remembering it to be.
Today at 9:47 AM •••

Eliaquim
I finally found something that pleased me to organize my tasks.