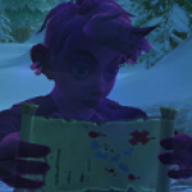 I find games that feature a strange place that becomes something, you did not expect it to be, intriguing...


The proverb: Don't judge a book by it's cover.

Yes, it's for real this time !
For you to get an idea, the game is already playable from beginning to end and features 6 bad ends, 1 normal end and 1 good end with slight variations depending on your playthrough.
All that's left now is extensive playtest to squash sneaky bugs and do some minor system adjustments here and there so that the general flows feels right.

Here is the Steam page for you to check out some of the improvements made and wish list it too ;D!


The release date may not be exact but it's looking like a realistic prediction if everything goes smoothly. I still need to submit the game trailer, I hope I can push it fairly soon so to get that out of the way.

Also, for those who played the old VXA version back then and enjoyed it, you can go ahead and PM me for a free Miraculo Island Steam key! Hopefully, I can even give you early access to the BETA which should become available to play in just a couple of weeks. All I ask in return is some comment after having played it (positive, negative, bug report... anything works!).

Finishing, although I'd have liked for this game to touch more topics and run on a more polished system (sorry, there's still some lag y-y), I can say I'm fairly happy with how it turned out. It was also a lot of work I couldn't have predicted at the time. But it all paid off in the end Now it's time to set this baby free.

That's all for now, folks ʕ•ᴥ•ʔ

Hey man, why don't you do some progress on your game? Oh, because you'd rather wake up at 5am and spend the night making a cosmetics system for your side view battlers? Ok.
15 minutes ago •••

spillycup Finnuval spillycup wrote on Finnuval's profile.
i love u so much! i’m so happy you’re in my life right now
Today at 7:59 PM •••

alice_gristle
To my horror, I found out I got zero Jack Vance books in my bookshelf! Where do y'all go in the internet to buy used books? Like, not Amazon?
Today at 7:02 PM •••

Marquise* Mrs_Allykat Marquise* wrote on Mrs_Allykat's profile.
Your new logo is sooooo attractive! Feels like those sour liquid candy mixed with the wrapping of the popping candy rocks ones. ^^ It gives flavor and taste to our eyes. ^^
Sorry I couldn't comment before, I relogged here for someone's B-Day yesterday. ((Yeah yeah... been scared got on the throne and all as usual. Being social seems harder than walking now. So sorry to everyone and especially you.))
Today at 6:56 PM •••