There is also the option to store a certain actor's friendship value or friendship level into an in-game variable. You can then use that variable's value as a conditional trigger for a new event, etc.

An actor's friendship value can be viewed in a custom scene. You can access it from the main menu or simply by using a plugin command.

Note: If you used version 2 of this plugin, you will need to redo your plugin parameters. The parameters are basically the same (other than some new ones), so you can probably just take a screenshot of the parameters on version 2, replace it with version 3, and then copy them over.


The format of these note tags is out-dated, see plugin's help file for the proper format. Install the plugin using plugin manager and edit the plugin configurations (there are plenty). Read the help file for more info on notetags and plugin commands.

The plugin even supports Multiple Leaders. You can view all actors' relationship value with each other.
You have a choice between Single Leader scene or Multiple Leaders scene Terms of Use
Free to use in both commercial and non-commercial projects as long as credit is given.
Simply credit "Moogle_X" in your in-game credits. You can optionally credit me as well as either "Solar Flare" or "Solar Flare Games".

Based on Moogle_X's GitHub page, their version of the plugin appears to be licensed under the Apache license. As such, I've chosen to license my version under the same license. The details can be read here, but basically that means you can modify it however you want and distribute your changes anywhere, as long as you don't remove Moogle_X or me from the credits in the plugin file and add a notice to the file indicating that you modified it. (If you don't distribute your changes, I believe you don't need to add the notice.)

Looks like you did some good work adding cool features to this system! 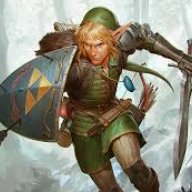 is there a way to make it so that the friendship adds skills to the Leader?

That doesn't exist right now, but I can look into it. Maybe it won't be that hard. 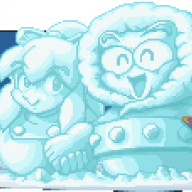 First I can't thank you enough for giving this plugin a second chance at life!

I seem to be having a bit of trouble bringing up the friendship menu using Yanfly's Main Menu Manager plugin. I've set up the parameter the way you've labeled it in the help file however I still seem to getting this error? 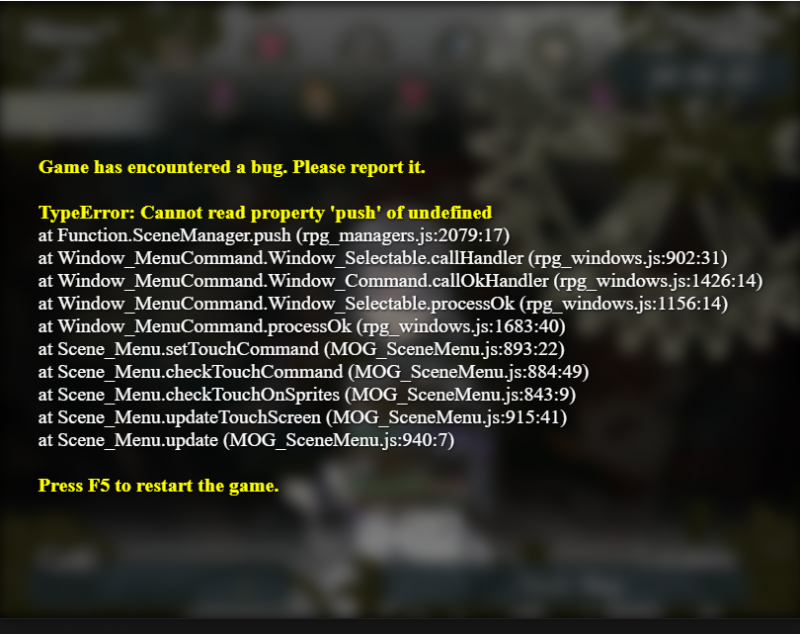 I've set it up as such 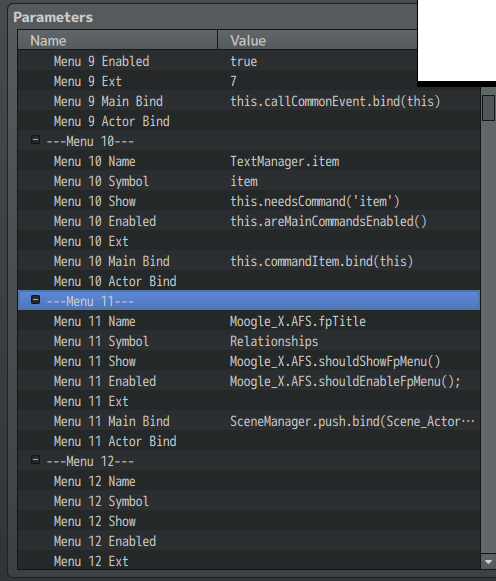 The only thing I changed was the "Symbol" since that is what I want the command to be called in my game.

I'd like to know if I've set something up wrong?

Edit: I found a work around by just calling the scene via the plugin command, since it doesn't have to be in the main menu anyway. Though if you know what went wrong feel free to let me know regardless.
Last edited: Jul 15, 2020

There might be an error in the help file... can you try SceneManager.push.bind(this, Scene_ActorsFriendship) and see if that works? Basically, just adding "this," to the script call.

Solar_Flare said:
There might be an error in the help file... can you try SceneManager.push.bind(this, Scene_ActorsFriendship) and see if that works? Basically, just adding "this," to the script call.
Click to expand...

Still no dice. I tried running the script call from a completely new game with only yanfly's menu manager, thinking the problem might have been my Moghunter plugins instead, and came up with a completely different error. 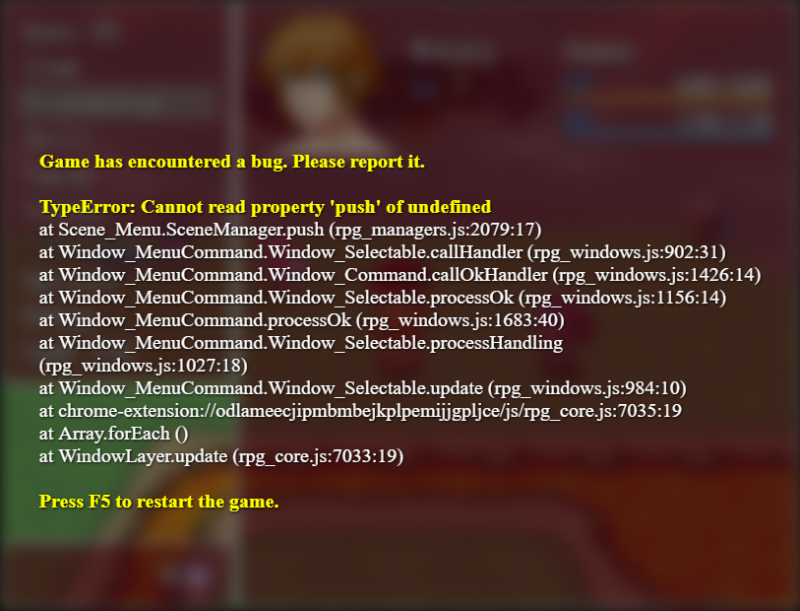 If i may add a second suggestion:somewhere to show the actor's Nickname,maybe?

@Fangzarie I just tried it in a blank project using only YEP_MainMenuManager (the version in the dlc folder) and this plugin, and it works with the settings as given in this plugin's help. I do notice that you set the symbol to something different; I'm not sure if that would cause a problem, but I don't think it would cause this problem.

The symbol is an internal identifier that the game uses to link the menu command with the action that it will perform, so setting it to Relationships won't make it show as that in the menu - the name that actually shows is Moogle_X.AFS.fpTitle, which is code that tells MainMenuManager to ask this plugin what the name should be - ie, it will use the name you set in the ActorsFriendshipSystem plugin parameters. You can of course set it to something else, if you want; just be sure to enclose it in double quotes if you do that.

As to your actual error, there is something very strange about that stack trace... can you try removing the "this," we added earlier and instead put "window." at the beginning of the bind command? No quotes there.

the names need those "thingy" so name "YOUR MENU ENTRY" sp "Relationship"
so that name show up in the menu.

if you leave you the "those" you get the error.

Yes, if you're putting a literal name there. However, if you set the name as shown in @Fangzarie's screenshot, without quotes, then it will work and use whatever you set as the name in the ActorsFriendshipSystem's parameters.

Solar_Flare said:
Yes, if you're putting a literal name there. However, if you set the name as shown in @Fangzarie's screenshot, without quotes, then it will work and use whatever you set as the name in the ActorsFriendshipSystem's parameters.
Click to expand... 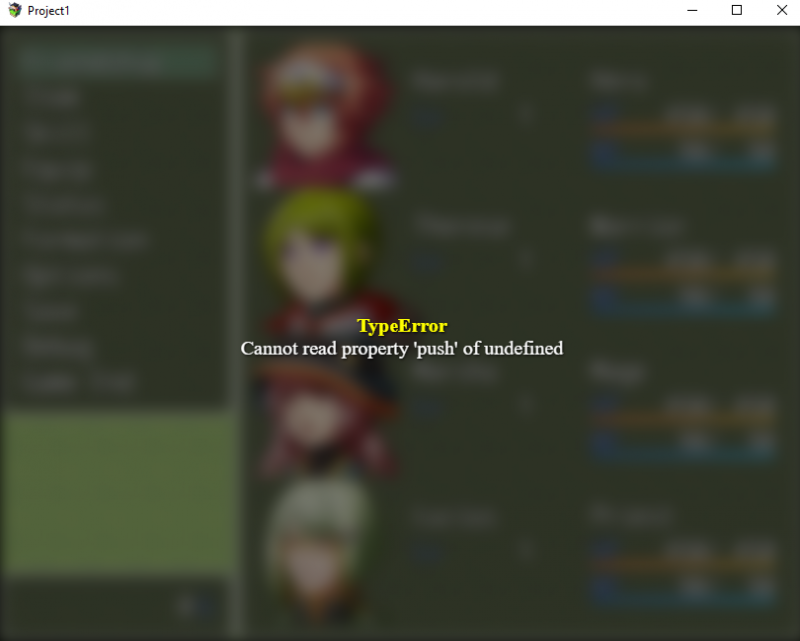 I'm using engine version 1.6.2 if that could help any?

That's the same error as before, it's just that you had a plugin that changes how errors are displayed. Using engine version 1.6.2 is fine (in fact it's required, not sure if I mentioned that in the opening post).

Can you press F8 and let me know if there are any other errors in the console besides this one? Maybe there's an error loading the plugin which then causes this error.

Solar_Flare said:
Can you press F8 and let me know if there are any other errors in the console besides this one? Maybe there's an error loading the plugin which then causes this error.
Click to expand... 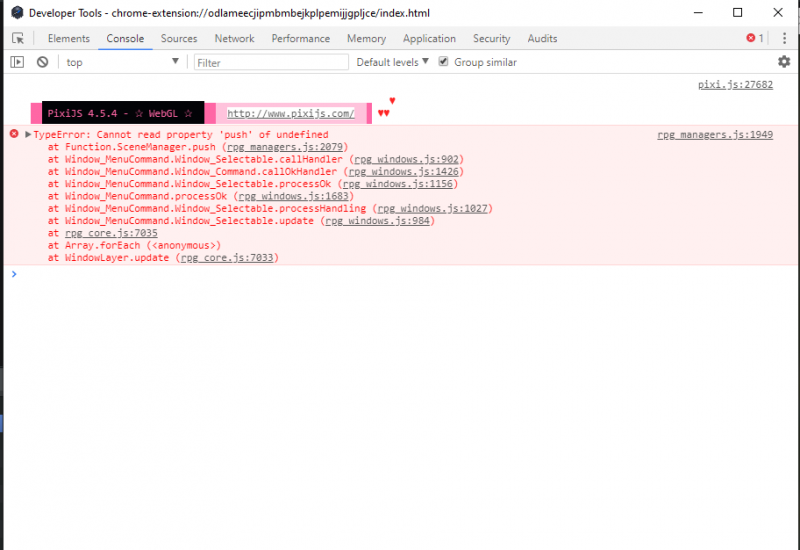 It's strange because the plugin works from a script call when it is not showing in the menu but trying to call it from the menu gets this result.

Nothing new, huh... but I did a little experimentation, and found that SceneManager.push.bind(SceneManager, Scene_ActorsFriendship) seems to work. Try that?

Solar_Flare said:
Nothing new, huh... but I did a little experimentation, and found that SceneManager.push.bind(SceneManager, Scene_ActorsFriendship) seems to work. Try that?
Click to expand...

I am not at all sure what difference that made but for some reason or another that seemed to work!? Thanks so much for the help on such a weird little niche error!

The weirdest thing for me is that the original command did seem to work when I tried it in a blank project, even though in retrospect I can clearly see how and why it's wrong.

Carmifele said:
If i may add a second suggestion:somewhere to show the actor's Nickname,maybe?
Click to expand...

Almost missed this post, sorry... to clarify, do you mean you want to show the nickname in the friend list? Or in the leader list? Or both?

EpicFILE
I stumbled upon 2 articles about why time goes faster as we age, and how to "slow down time".
Check them out, very interesting read.
Faster Time
Slower Time
Today at 8:55 PM •••

Candacis
Anyone can recommend a good gaming mouse? My mouse wheel has given up. Last mouse was steel series diablo iii edition (I know, it's been a while)
Today at 7:46 PM •••

ImaginaryVillain
And then I figured out a way to doing a "regular animation" that's affected by PIXI particles. So now each frame of the animation gets particle effects. Soon my dreams of a world without QSprite will be realized.
Today at 6:54 PM •••

Lornsteyn
Currently every NPC in my RPG gets a name, its kinda useless to name all, but Its also cool, somehow.
Biggest prob is to come up with different names. xD
Today at 6:26 PM •••

Candacis
I'm back from my visit to my family. Was really great to see them again after a year even if I had to get tested for covid for the visit.
Today at 4:26 PM •••