Most Frustrating Things in RPGs?

Actually, that's a good point. Why aren't there more RPG's with already established relationships? Is it because ones without are intended to target the 13-25 male demographic?

I mean, I even thought I was being unique by already having all my main characters "paired off" in my own game. Though, I did so just so I wouldn't have to try to stumble my way through trying to write romance (especially when the game isn't about that, at all). So, I opted to have a married couple who already had two children... a couple that's been dating for quite some time and aren't quite ready to commit to marriage... and then I just have the rest who are single and aren't really looking for relationships.

Anymore, when I tend to engage with "Romance" in video games, movies, or anime, it tends to be the sort where there's very little "sexual tension" at all. The characters stumble for a little bit in dealing with their initial feelings and how to approach them, but then they make it clear how they feel and if there's reciprocation, and then their plotline moves forward. I rather like when the main characters have chosen who they want to be with and aren't "wishy washy" about it. They admit how they feel and deal with the consequences, no matter what they happen to be.

It is very difficult for me, at 30+, to engage with romance plotlines of "will they or won't they?". I prefer when things progress in a relationship and begins moving towards them actually making plans.

EDIT: I was also going to add... I'd like to see other relationships other than "opposite gender pairings" actually written well. When given the option in RPG's, I invariably make a run just to explore those sorts of relationships. Almost always... they're written TERRIBLY. Like... super stereotyped. Like... nearly everything is veiled innuendo. Or, the characters themselves are stereotypes. Or, the relationship feels like pandering rather than two people with real emotions and thoughts trying to actually have a relationship.

For me, Bioware was like the worst offender of this crap.

I don't mind if players are given options to be "inclusive". But, honestly... don't do it just to be inclusive. Do it because you're passionate about it. If you give me both a male and female option, they should both be fleshed out with their own personalities and dialogue. If you let me romance any gender I choose, then all options should be accounted for and should all be realistic.

I'm here for a good story and great characters.

I'm not here because I'm hoping you tick some "personal preference" box.

Because, let's be honest...

You aren't going to let me play an overweight character. So, I'm never going to be here in hopes you had some sort of "inclusion" in your game.
Last edited: Dec 10, 2019

@Tai_MT : I wonder if some of that is they don't have writers who understand those pairings and what they want on the team, so that is why it is not written well. Who knows?

As it is though, I'd be shocked if the reason is to cater to the 13 - 25 year old group. That group has the lowest $$$ to spend, so why would anyone with a brain market to them? 13 - 18 you are dependent on parents for money, 19 - 25 you are broke usually and can't afford games. I usually found I bought like 3 games a year when I had to start buying them myself, so marketing to me was a bad idea as I was a poor college student and an even poorer grad student. In fact, if not for the bargain bin and many $9.99 sales on games that were hot last year or year before, I'd probably have had like 0 games all college/grad school and just replayed Heroes of Might and Magic 2 until I see it in my sleep.

Back to the point on relationships, I was going to add romance options to my game, and I quickly ditched them because first, they added nothing to the game and secondly, my attempt felt about as bad as early bioware romance attempts. So I figured since I couldn't do it well, I'd drop it and just put fixed relationships. And you know what, I think my game was better for it in the end.

@bgillisp It likely depends on where you're doing the marketing. When I was 6-12, I could count on like 4 new games a year, if I wanted 4 games a year. Birthday, Christmas, and usually a couple more if we had money during the summer or spring. Once my parents divorced, however, I couldn't even count on 1 new game a year (my dad did not like buying me anything if he didn't have to. He used to get irritated with buying a 24 pack of coca cola every twelve days for me). I imagine other families buy their younger children as many games as I used to get... 4 a year or so. Maybe more, if they were richer than I was.

When I got my job and started having to pay rent, I was buying about 15 games a year on my own. That is... until rent skyrocketed and I couldn't even afford to eat anymore.

Most College Kids around here usually hold down a job as well as do college, so they usually have a little extra, but they are likely to buy maybe 2 games a year or something? Or, pick up cheap ones?

While it probably isn't the college kids buying the games in the 13-25 demographic... it is likely those who went straight into the job market who are doing so. It's a sizeable market for males.

Anyway, at that age, males are also going through all their hormonal changes and such and so "romance" typically appeals to that audience quite a lot. Especially if the main character is a male and it's about whether or not he'll get the highly desirable female that his character probably has childhood connections with.

What I'm basing the demographic targeting on is mainly what I see current demographic targeting on with anime (something I watch quite a lot of). The 13-25 demographic for anime typically revolves around the "will they or won't they?" type romance stories. Or, the highly charged relationships of less... tame fare. These stories are usually also coupled with the "power fantasy" type stuff most RPG's are known for. MC is super powerful, or is the chosen one, or something... and they've got a secret crush thing on the main girl, but they're super awkward about it... and the whole romance is just about dealing with the super awkwardness of the first relationships most of us ever had.

Meanwhile, there are few games that tackle relationships from the "adult" perspective, unless they're dealing with some kind of abuse or divorce. Which... is quite weird.

I wanted to tackle some adult relationships in my game. Not like you see in "Romantic Comedy" movies or "Romance" movies. I wanted to tackle something more akin to reality. Giving the characters real life reasons for falling in love with each other. Reasons that would make the couples compatible with each other as well as good parents. I thought it would be one of the most interesting ways to tackle "romance" in my game since I really just hate writing the usual romance tropes and romance fantasies.

Well... that... and I kind of wanted to just be unique and do something I don't see much.

As it stands now... I wish there were romance options out there that weren't just things catered to the 13-25 male demographic. I like when media tackles relationships from a realistic perspective. Treating them as real people with real baggage and real emotions to consider.

The “option to choose” feature bothers me in games for the same reason that they don’t tend to be fleshed out well when it comes to the option of the same-sex partner, or that partner runs on the stereotypes based around their sexuality. If you’re not going to fully flesh out a character to be beyond stereotypes exclusive to their sexuality, or even void of a remarkable personality, why bother having that mechanic?

Sub-related to that, is also having the routes be the exact same except you’re a boy with another boy now instead of a girl. Unless it’s to decided the gender of your partner for the story, it should be safe to assume that these characters are two different people. And your experiences with them should reflect that. It’d be a lot more work, but you should think about how much work you need to put in before you do a thing.

Across my projects, only 1 deals with a romantic relationship between characters in the tropey childhood friend ways.

But, instead of it being fatal attraction or whatnot, the setting is what paired them off romantically. Essentially, the marriage had already been arranged, and the people in the lives saw to it that they would spent much time together. They spent their childhood together, became knights around the same time, and were made partners in knighthood to protect the kingdom.

However, much of this was only caused because the kingdom was so isolated from the rest of the world, being a floating island for centuries. While the rest of the world had developed with access to other peoples, this kingdom developed alone. (That also would be why the characters who come from here start at level 1, nobody’s ever had real combat experience, just training.)

The other 2 characters in your party don’t have budding relationships. 1 is long married, and the player can learn of the hardships of his relationship, while the other comes from the grounded world and is quite jaded towards men and only joins you on the orders of her sensei.

I have to say, I dislike crafting in games where you can just buy whatever it is you could craft. (I'm guilty of doing this in my own games and I always hate it, lol).

I would much prefer a crafting option for example if you were stuck trying to escape a dungeon and had no access to a shop or convential thing and so crafting was something you had to do in the game. I would spend hours doing it them to level up and get the best stuff. lol. I might even enjoy doing battles to get what I needed and I hate having to do a million battles just to level get through a game.

alltheyuriz
My favorite thing about my magical girl Yuki is her ahoge can sense food, she's lazy and a crybaby and LOVES food
6 minutes ago •••

and some girls im working on 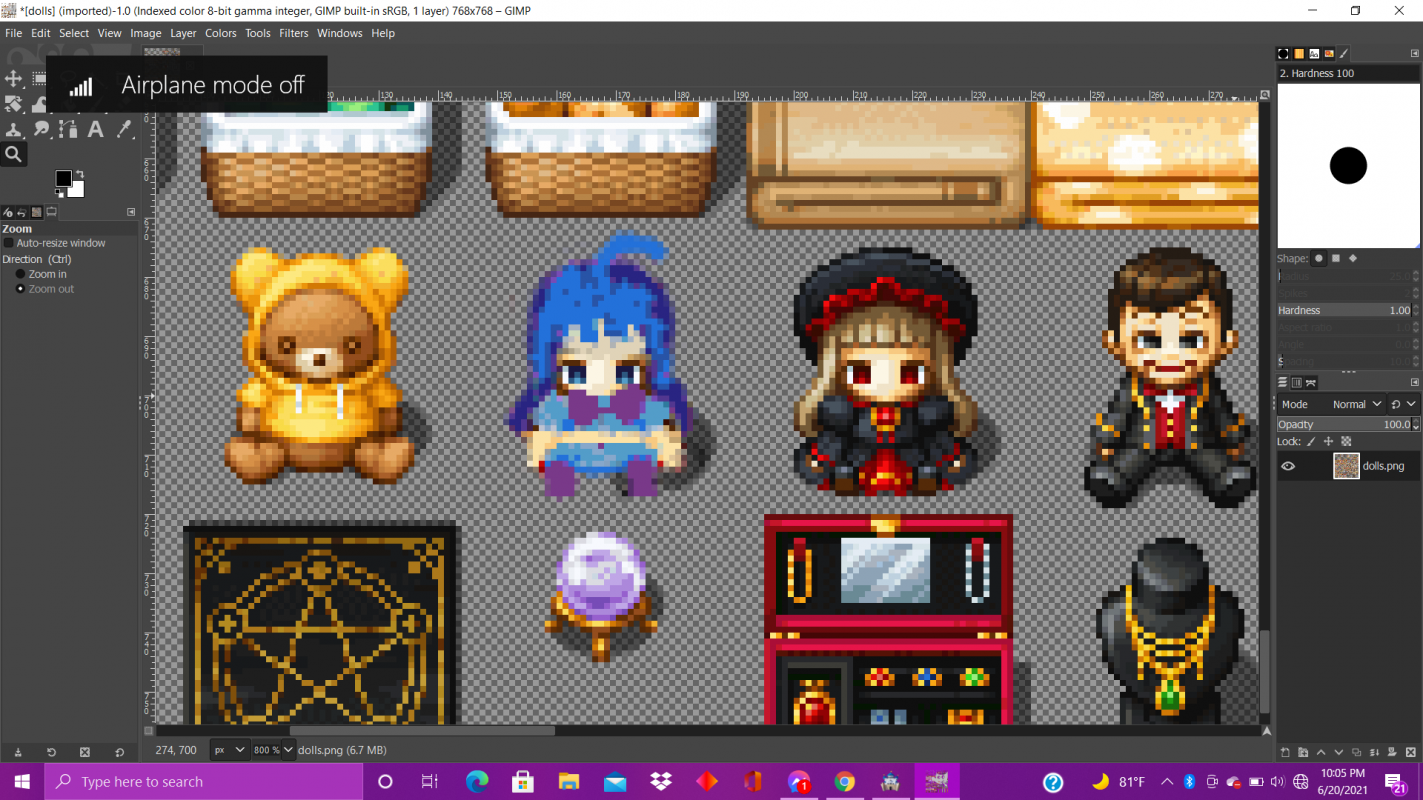 HoshimiyaMoka
Not about my game project but i feels like to talk about it a bit.

It's my コテキャ and maybe closest thing in english is a "avatar personality" i guess?
Her design also looks very similar to protagonist from my game because i'm so uninspiring
Oh and my hobby is sleeping and drawing.
Today at 10:03 AM •••
MysteryMan23
Okay, so it seems I've found a major bug in VNM. Check my thread about variable buttons in the support forum for more info.
Today at 9:06 AM •••

HexMozart88
Man, this quick One Map game is causing unprecedented amounts of trouble.
Today at 7:40 AM •••