Move events not working as intended

First post here and it is for something that has been giving me headaches for the past few nights now. So what I was doing is a sort of sliding puzzle where the character becomes a ball(fade out>change character>transfer to start position>fade in) is pushed forward(set move route to down) and then goes through a series of events that make it follow a set move route based on the event(i.e. down event goes down, left event goes left, etc.), all events are set up the same with an Event Touch trigger, Same as Character priority, and with the "through" box ticked.

I am using Hime Work's Move Route Triggering(http://himeworks.com/2013/11/move-route-triggering/) that allows move routes to trigger even when an event is running, so in theory the player touches an event, moves forward based on the direction the Set Move is telling him to and goes through to the next event until it finishes the course. This works fine for the down events but the trouble starts when the other directional events are touched: they either do not trigger(most common), trigger too early(more common), or disappear from the map altogether when I start the game(happened once or twice).

Screenshot below is how the events are set up(only showing down event since the others are just the same but with different direction movement): 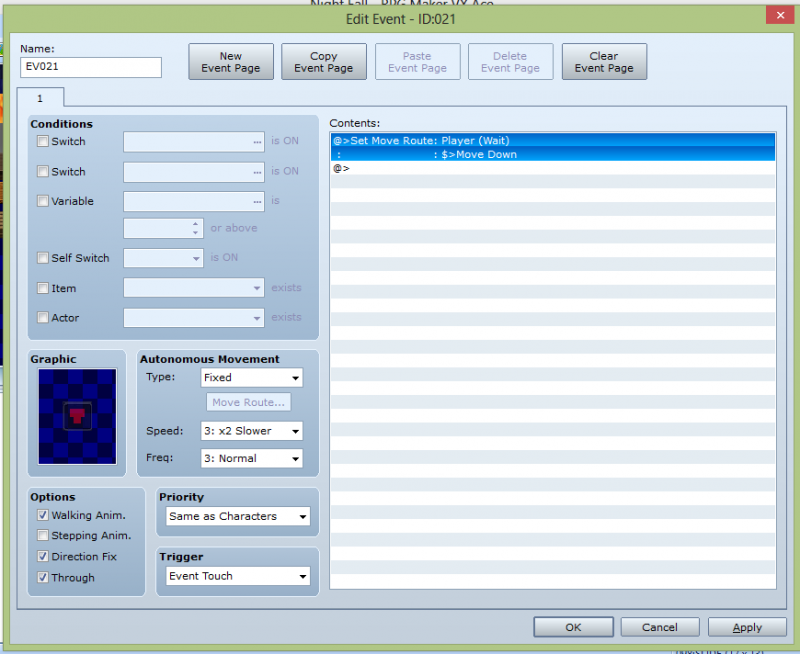 I'm really losing my mind here so is it the script I am using that's causing this? I'm presuming I'll have to abandon this if it's the script since that's the only thing I can making this puzzle work, but I'd rather not do that.

Edit: Added link for the script in main post.
Edit 2: Changing movement behaviors from "move" to "turn direction and move forward" somewhat fixes it: the other directions are triggered but it somehow adds extra steps way beyond the range of the event
Last edited: Jun 17, 2019

This looks like it is script related, rather than just your events, so I shall move this to RGSSx Script Support.
Please edit your post to include a link to the web page where you got that script so that if people want to check something before giving advice, they won't have to go hunting.

Events on Priority Same as Charackter that have under Options Through checked, will not be able to be activated by touch.
But they still activate if you press Action button next to them. atleast if i remember correctly.
Maybe that caused some of the unwanted behaviors.

My English aint the best, and i didnt understand most of the explanation about the problem, those additions what than somehow happens, just confuse me even more. Sorry, but maybe this guess still helps somehow.

GaterJ said:
This works fine for the down events but the trouble starts when the other directional events are touched: they either do not trigger(most common), trigger too early(more common), or disappear from the map altogether when I start the game(happened once or twice).

Screenshot below is how the events are set up(only showing down event since the others are just the same but with different direction movement):
Click to expand...

@GaterJ If the events are truly all set up the same way, then the problem is most likely with your script and/or scripts. If you want to fix the problems, you should be showing those problem events along with this one that works. If you just say "down works fine" and "here's down" and "the rest are the same", then no one here can see if there's something you're missing. I'd say start by showing all the events in question and then if the problem lies with those events, it can be fixed. If not, the deeper potential of it being a script issue can be confirmed and examined.

Yeah, sorry for being a bit vague on that part. What I meant was the other events are basically the same as the "move down" event just with a different direction of movement so it's literally just an event with "Set Move Route: Player Move Down/Left/Up/Right" in it, same triggers, same tick boxes, same priorities.

Although I may have found the cause to the problem. Apparently it stems from the way that I arranged the move events, for example:

Apparently, stacking them like that process too much movements that they end up stacking next to each other and messing up the queue so when the player goes through the course, movement becomes "DDDDDRRRD" and then gets stuck OR it ignores the first R altogether since it's supposed to move down first.

Storyteller-Hero
So a new RPG Maker has been teased on RPG Maker Web's Twitter. Hmm...
53 minutes ago •••

MushroomCake28
I just started parallax mapping. Better results for sure, but a lot more time consuming. It's more fun than I thought though.
Today at 11:30 AM •••