Hello all, I hope you are doing well.

I'm working on a project that I'm not going to use many magical skills in, just standard attacks with realistic weapons.

Problem is that makes my battle system pretty......bland. I want to make things a little more interesting by having multiple attack options.

As an example; I want a sword when equipped to have a chance to either use a "slash" attack that does less damage but has a high hit rate. as well as a "swing" attack that, while less accurate, does more damage, and maybe some other more advanced moves as wellI. I want the player to have the opportunity to select from these multiple moves, forcing them to implement strategy of what to do in each scenario in order to be the most effective, and meter out when they want to take the risk of using a heavier attack.

What's the easiest way to go about doing this?

simple - make them as skills requiring the weapon type to be equipped to be usable.

Skills are not limited to "magic", you can to anything here that you want.
You can easily make skills for swords, for guns or whatever you want - the name of the skill type becomes the name of the command in the battle command menu

OK thank you for the tip. I have one more question, though.

So I got rid of the "Attack" all together and moved both of my attacking moves over to a new "Attack" skill type.

I suggest you follow the link to the starting point in my signature and work through the tutorials listed there to learn the basics.

If you had read the notes on skill #1 (attack) and skill #2 (guard) you would have learned that you cannot move them, the attack button will always use skill #1 (no matter what it does) and the guard command always skill #2.
And you can't change that without going into scripts/Plugins, which is much more complex and should not be done without good understanding of the engine.

As Andar said skill 1 and 2 are always bound to attack and guard in the engine, one of my least favorite features.
My suggestion is make an 'alternate magic' that's called "Weapon skill" Attack will be your standard well rounded attack, then weapon skills can be added and removed when someone equips different weapons.
Combat menu will look like:
Attack
Guard
Weapon Skills
Flee

I've done just that. Thanks to both of you . I only have a single issue left.

So I have "Standard Attack", then a "Custom Moves" Skill with a "Jab" and "Power Attack" available. The only problem is that only the Standard Attack and Jab have the weapon I'm using in use when I do a side battle. The power attack is just a punch of some sort (Although it appears that the Power Attack is distinct in statistics, just no animation)

If you're talking about the weapon animation, that means that you set the skills up in the wrong way - either the skill type is classified as magic in the system tab or the skill itself isn't set to normal attack animation. Show a screenshot of the skill if you need help with the settings.

The Yanfly plugin Weapons Unleash allows you to replace the attack command (and guard also). You can use tags on the weapons themselves to specify what to use, actually.

Sounds just what you're looking for.

OK; so now here's some screencaps of my 3 skills and my systems tab; only the "Standard Attack" actually uses the weapon in an animation. 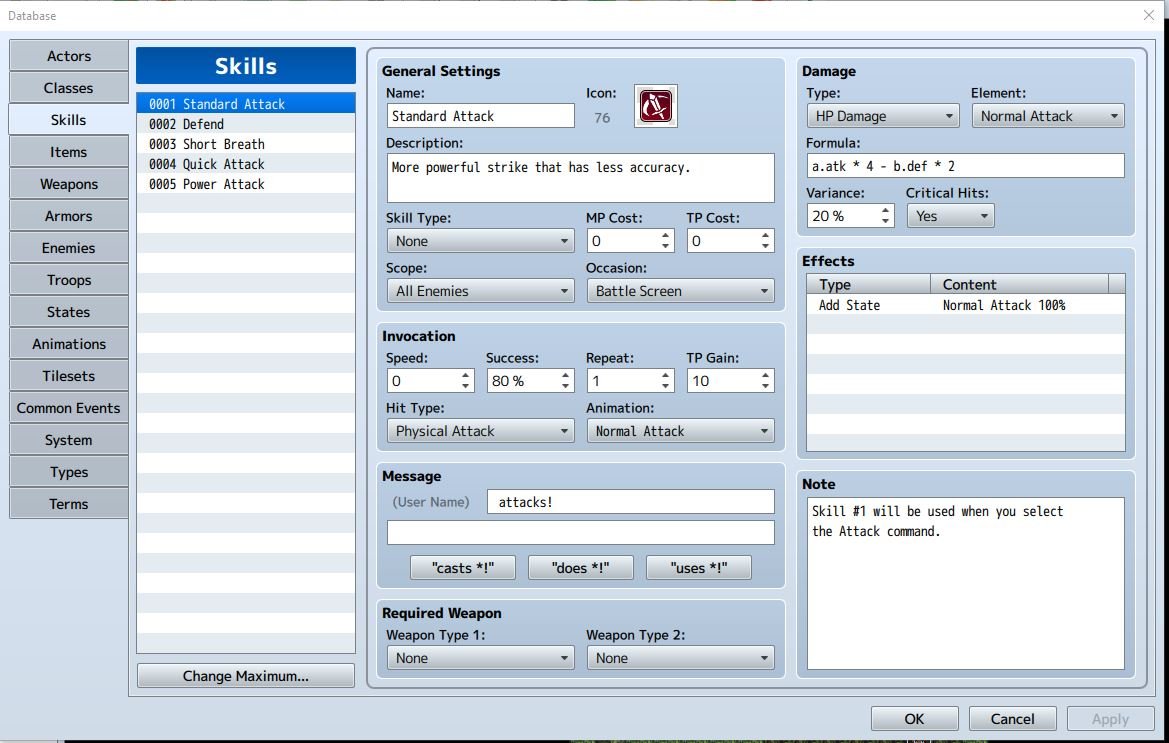 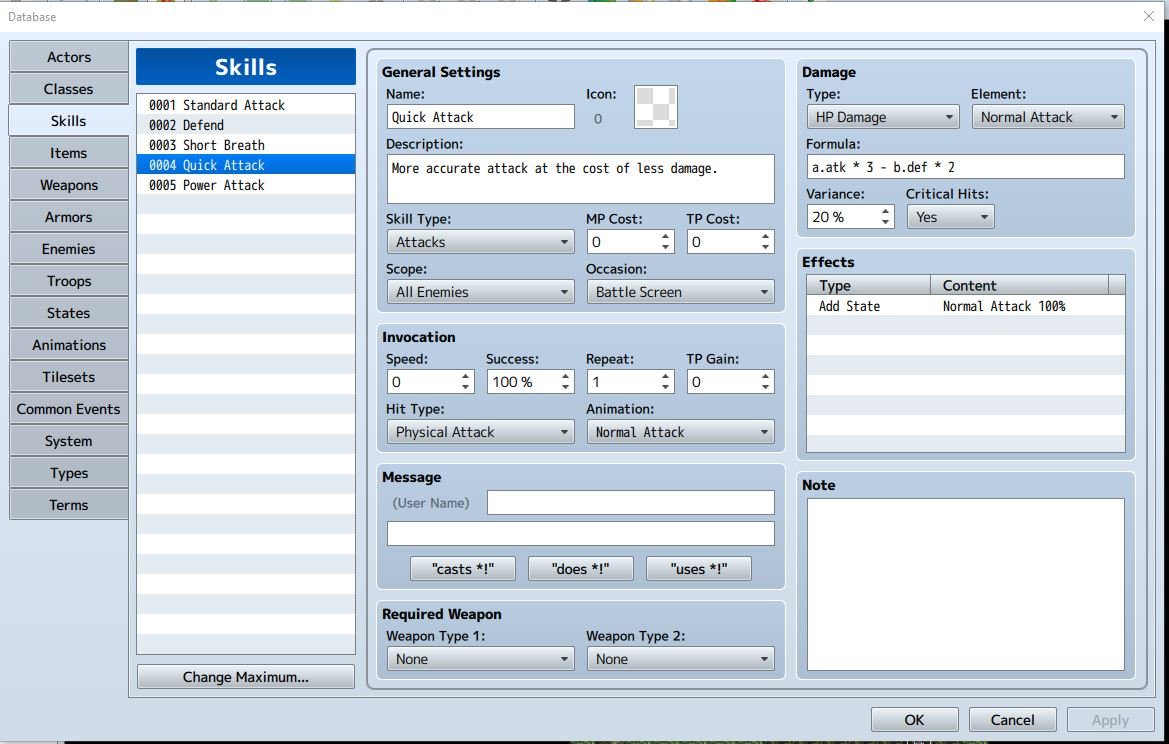 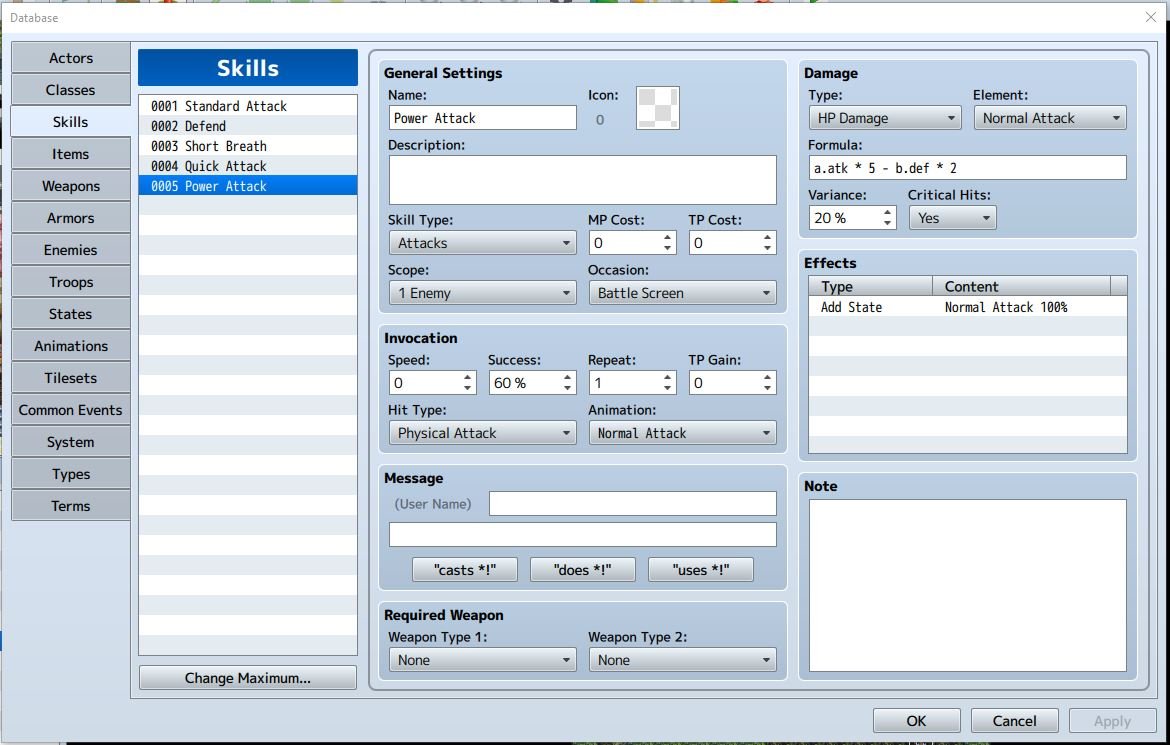 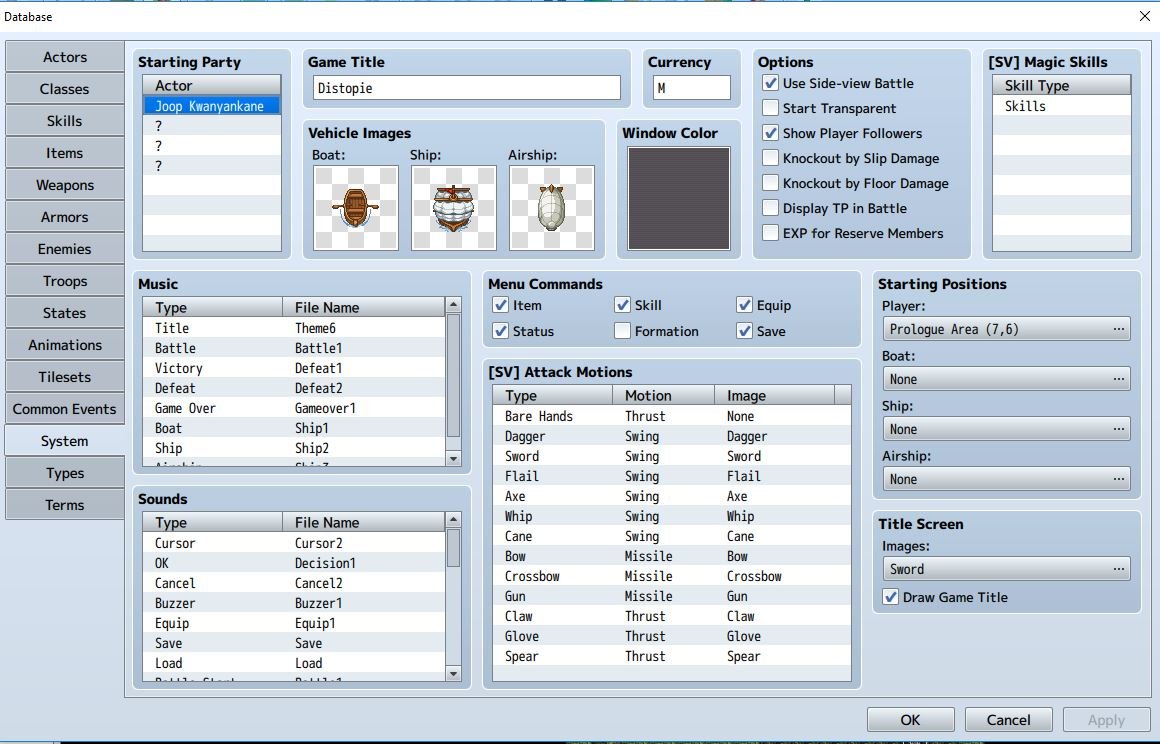 Did we ever get an answer to this? Because I've encountered the same issue lol. My characters all like to open there hands when they're supposed to be swinging a sword or something. Does Yanfly's Weapon Unleashed fix this issue? I don't want to change the Attack and Guard buttons but just allow other attacks to be made with the same motion as the standard attack. Thanks..


I suggest you make a new thread, setting out precisely what your issue is.

LittlePIGGY
The main character of the book)
35 minutes ago •••