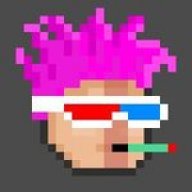 Hey guys! I wanted to show you this mini game I made using Galv's "Invaders" script.

Mini-Game Setting
There's an area in my game which has been sealed off and left untouched for years. When exploring it, you come across this dusty old arcade cabinet with the mini-game "Murder Taxi" (There's possibly a better way to translate the name).

What's "Murder Taxi"
It's meant to be a funny little tongue-in-cheek distraction. You're playing as a taxi driver trying to survive on the road. Other drivers will try to shoot you down, food delivery drivers will zoom across the road, and suicidal electric scooters will zero-in on you like a homing missile. Luckily for you, you can also shoot to clear the road, use bombs you find on the street, and you have a special horn you can charge and release as part of your strategy. I'm sure the idea of an angry taxi driver literally blasting the horn to clear the road is something most people can have a chuckle about. There's a pretty funny boss fight I left out of the trailer, to keep as a surprise for the players.

Short Dev Notes
I had most of it done last weekend, when I did most of the graphics and decided on the characters. Galv's script is really nice to work with. Over the course of the week I gave it some extra polish after work. I kept some bits of Galv's stock assets in there, but most of it is new. I did all the graphics in Photoshop. While I made 99% of the music in my game myself, for this mini-game I used a music pack to speed things up.

There are some unique additions which weren't in the original script:
Hope you enjoy seeing the video. Let me know what you think!

looks funny to play though, mostly are planes or helicopter/space aircraft,
but taxi, not seen that before.

Good job, hopefully you have a demo or release date for it to play.