My budget PC (with progress report)

So, over the last few months, my friends here on RMW, and some of you who saw my status as well, knew I was working on building a new PC. Well, I finally finished. It's a glorious triumph of quiet operation and good specs, while not breaking the bank, so to speak. So here's how it went and to be clear, I started purchasing items on March 3rd, so it's been a while. Here's what originally wanted for my build:

I got my motherboard and CPU on this month. I had bought the Gigabyte GA-B250M-DS3H motherboard and Intel Pentium G4560 3.5Ghz. Great combination and would be a nice way of getting me to a modern system. Sad part is that when you're on a budget, you can only get one or two parts per month. Still, we trudge on.

Nothing happened during this time frame due to financial problems, but once June came along, things got better.

I was finally able to get everything else, however, during April and June, the Eth mining craze came along, so getting an affordable AMD Polaris card, such as the RX 470/480/570/580 was impossible. I skipped it and got the Zotac Geforce 1050 Ti OC Edition, dual fans, which while not being as good as even the RX 470, was still a good buy since even they are starting to go up in price slowly. Due to some financial help, I was able to get the RAM, power supply, which came last, and case, which I swapped out for something with some blue lighting. I was ready to build. I had a copy of Windows 7 Home ready to go and all the essential parts, so I built it and turned it on. Stayed on for one second, if even that and turned back off. Made sure all the cables were plugged in properly, try again, same result.

I went on google to see what might be the issue. Seemed like it might be the power supply. I unplugged all other parts to see if it would turn on, but got nothing. Unplugged the CPU power cable and left the main power cable on. Success! So, I figured the power supply was to blame, called Corsair, they told me to send it back to Newegg for a replacement and hopefully it should work. Took a WEEK before I saw it, but I got it, eventually, in July. All of this happened at the end of June.

When I finally got the new power supply, plugged it in...exact same result. I knew then that it was the motherboard and was dismayed. The motherboard has been out of the return policy for quite some time, so I decided to just bite the bullet and send it to Gigabyte to get it RMA'd. They have been taking their sweet time, so I was getting bitter and angry, when all of a sudden, I get a check in the mail from my previous college, DeVry. Actually, it was from the Federal Trade Commission. Apparently, there was a class action lawsuit, one of which I guess I had opted in to way back when without really thinking about it and forgot all about it. Well, when I got it, it was just what I needed. I deposited the check, as soon as the funds were available, I ordered an Asrock B250M Pro4 and it got here on the 13th. Finished my build, got Windows 7 Home installed and was happy.

Fast forward to yesterday when I got Windows 10 Home installed. The upgrade was smooth, but then a glaring issue occurred. When I overclocked my video card with the MSI Afterburner software, Guild War 2, my current MMO of choice, was blocked from using the graphics hardware. I was understandably upset. I returned the card to factory settings and it was fine. GW2 was able to use the card again. Needless to say, having bought hardware, but not being able to use it how I wanted without Windows 10 throwing a fit was angering me. Still, I pressed on. A friend of mine suggested I not use MSI Afterburner and she was right. I went back to Firestorm, the GPU utility for Zotac cards, and it worked! I got it overclocked and my games were able to use the overclocked card. Happy again.

To better show my build, rather tan just talk about it, here are some pics of it.

Sorry if a couple of pictures are sideways.

This isn't, however, my final build. I intend to add 8GB more of RAM, replace the video card with something beefier down the line, replace my main 500GB 7200RPM SATA hard drive with an M.2 SSD and add RGB lighting strips. I also plan on replacing any drive under 1TB with drives that are 1TB or larger. Here is my current configuration:

I will be updating this when I add on to the build or change anything. Thanks for checking this out and thanks to all my friends for showing me encouragement and support during this build. You guys are awesome! 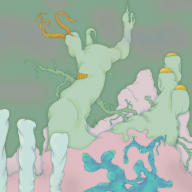 Nice man! I've been working on upgrading myself. I have an okay pc but I wanna run my favorite new game (Rising Storm 2) with good settings and have a really good constant frame-rate. May I suggest if you want more hard-drive space that you might wanna just get a solid state drive since certain programs will load fast off of it and most are super portable!

Yeah, that's why I said I plan to upgrade to an M.2 Drive for my main, eventually. They are expensive, but worth it, but seeing as we're on a very tight budget, will have to wait. Still worth it.

Also, thanks! Good luck with your upgrade. I actually upgraded from a very potato Core2Quad Q6600 2.4Ghz with an EVGA Geforce 9800 GTX+ and shoddily put together RAM of differing speeds and brands. It really is very potato. I plan on buying some older parts that work for it and fixing said discrepancies so that it's a viable, workable game server for some of the non-intensive games like Terraria, Starbound and a private server for Aion. For web, I've already got my Pi 2 hosting it, so I don't need it for that. My old pc of 8years is still very operational.
During these years I brought improvements, for the budget, I think that when we liked, there is no price 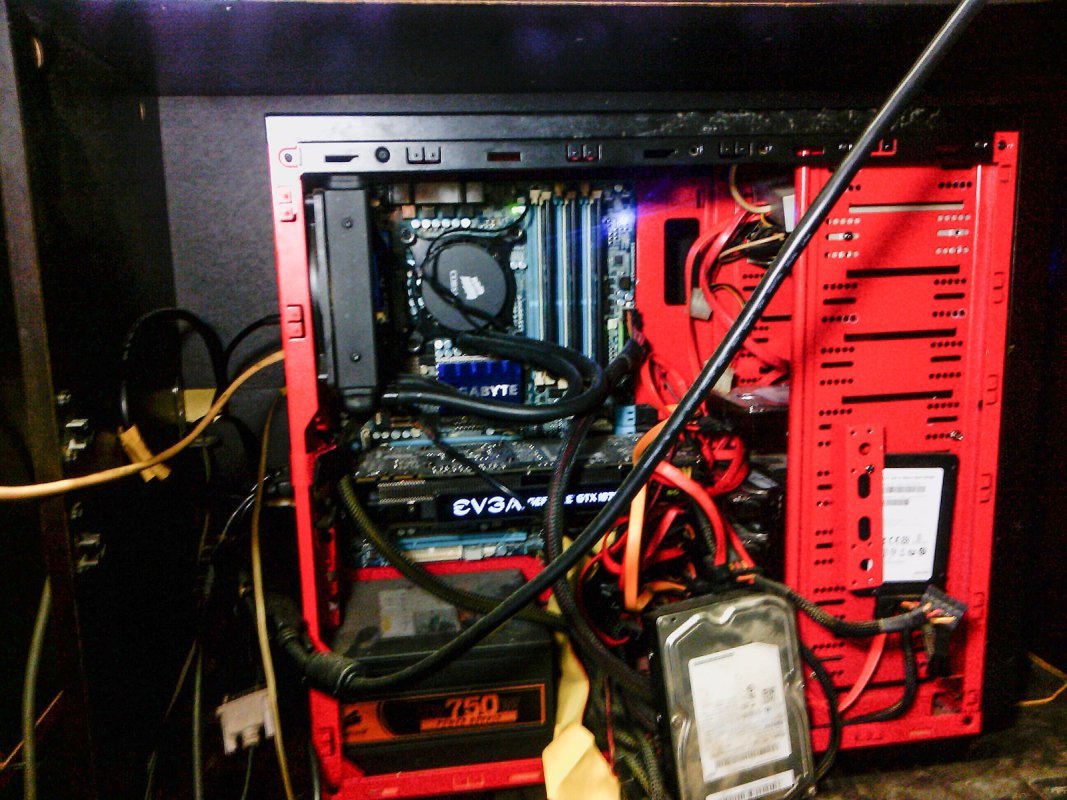 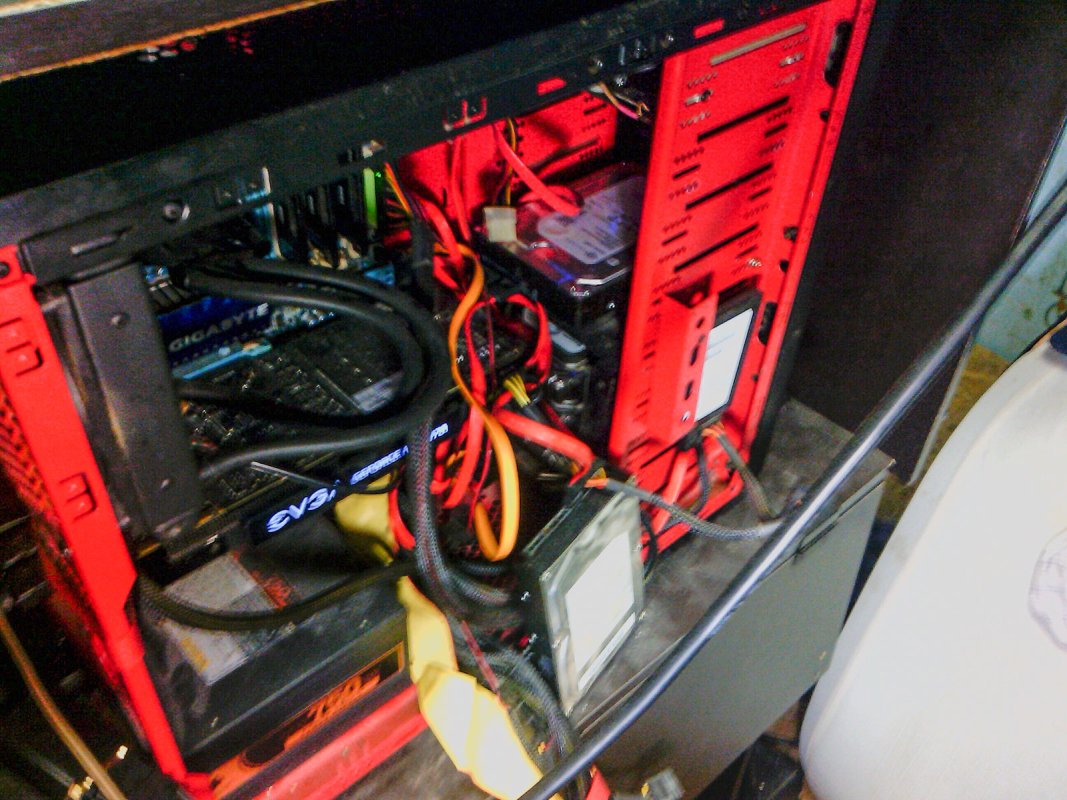 I'm falling in love with this box.
Is my next investment for my baby.!
Thermaltake Core X9
https://www.newegg.ca/Product/Produ...re=Thermaltake_Core_X9-_-11-133-275-_-Product

@djDarkX : You've pretty much qualified as a chef, only with PC parts as the ingredients~

(note the increasing mess around the potato~)
Jokes aside, it's a really cool budget PC. Shows that you don't have to spend $3,000 for a decent gaming PC. I'm sure it'll only get better. Thanks a lot for sharing~

This build should be more than enough to handle every game out there, even the most demanding and at 40+ fps (The Witcher 3 on High detail).
Anything over $1000 for a desktop is unnecessary to me (unless you really love 4k and are a bit of a detail freak), but that's just my opinion ofc.
I mostly enjoy assembling pcs with a restricted budget and I like compromising with the parts, while choosing what part I need more than others and what can be upgraded later.
The Pentium G4560 is a nice budget cpu, it's basically a small i3 with a slightly lower speed but with hyperthreading, you will be fine up to a RX 470 I think, before you will notice some bottlenecking.
Also yeah, SSDs ftw, soon as I touched them for the first time I realized that will never go back to hard-drives, the speed difference is just too big and since I don't really need a lot of space I'm sticking up with SSDs probably forever.

@Susan:
Are you implying he had a potato and still has one? With the blue colour being the only difference? -gets shot-

@Dalph : But potatoes are awesome.

Besides, the latter is a rare, specially cultivated, highly nutritious and healthy variety of the spud family. Note the classiness of even the cutlery and dish.
(Okay, I messed up with the comparison. I admit it. I'm sorry, DJ)

@Susan I thought the blue mashed potatoes were great. I'd go as far as you say I thought they were spud-tacular!

@Dalph Yeah, this build was around $550 in total, barring taxes and shipping fees and of course, the shipping of the defective board back to Gigabyte...still mad about that and I'm gonna continue to be mad about it until it comes to my door, fixed properly. Yeah, been running Subnautica and Guild Wars 2 very well, as well as Planet explorers, as much as the latter is kind of potato with its combat system, I still like it. Don't have a 1080p monitor yet, but that will come very soon. Just need to wait a bit longer to get the money for it and then I can buy it.

@Jonforum Nice, but mine was far worse in terms of specs. As I said before, my old PC was a mishmash on the RAM, different speeds being the really overwhelmingly bad part about it, the CPU wasn't even an i-series, meaning less powerful for computer tasks and the GPU was before even the 200-series from NVIDIA, so it was very power hungry and very slow by comparison. Didn't even have 1GB of VRAM. 512MB. Using that for ANYTHING nowadays...it was a miracle it ran anything. Haha!
You must log in or register to reply here.
Share:
Facebook Twitter Reddit Pinterest Tumblr WhatsApp Email Share Link

taarna23
Starting work on some stuff for the community. Hopefully it will be fun, and useful to somebody.
31 minutes ago •••

SirGatling
Searching what to play in my dead times, the nostalgia hit me hard and ended downloading the Patapon trilogy, hope I can avenge my child self and beating all the games hahaha
31 minutes ago •••