Hi! I'm currently doing a research project for my Business Administration degree here at university, and I've chosen to study cultural divergence among independent game developers; what this means is, I want to know how game developers - preferably one-person teams, as if often the case here with RPG Maker - are informed by their national culture, and if there's a correlation between them and others from the same culture, or if they correlate more with those of other cultures instead. Or indeed, as the term 'cultural divergence' suggests, if a distinct culture divorced from nationality has formed.

Honestly, the reason I had this idea was from using this forum and learning of the diversity in cultures and viewpoints - I'm genuinely interested to find out more about, say, perspectives on commercial game development from nations outside the Anglo-American sphere.

So what I'm doing is, I'm running a short survey - should only take 5-15 minutes at the most - in which you'll be asked for your stances on what you prefer to see in games you play, what you believe should be considered important when developing commercial games, and if these two things conflict - and then how you perceive your national culture (that is, the national culture of the country you reside in) would answer the same questions, plus how you perceive the basic makeup of the average game player in your country. I will also ask more generally how you'd class yourself on a number of linear scales and how that compares to your national culture.

I will be asking what country you reside in, along with your age and gender, but all responses will be kept strictly anonymous - nor will I use any information from outside the survey itself for my project, since forum posts could be traced through search engines. You can withdraw your answers from the project by sending me a private message if you wish, but note that in order to do this I will have to ask what your answers were so I don't remove the wrong set - for this reason, I recommend considering this before submitting.

Link to the survey is at the bottom of this post. Thanks for showing some interest, and I look forward to hearing what perspectives you have to offer! 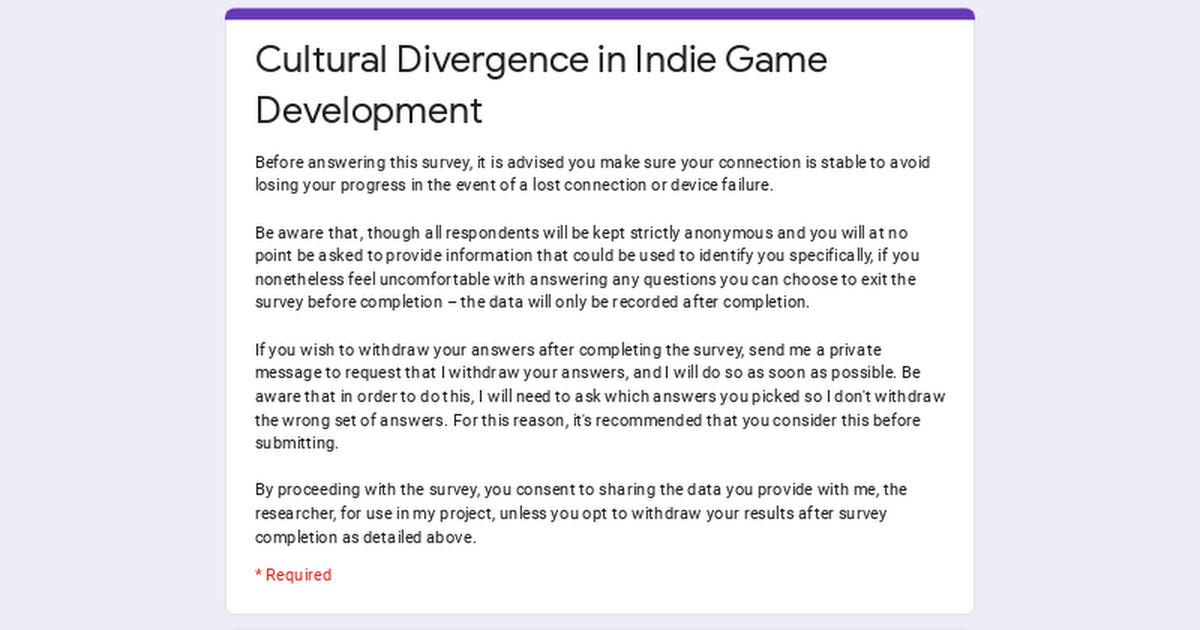 Before answering this survey, it is advised you make sure your connection is stable to avoid losing your progress in the event of a lost connection or device failure. Be aware that, though all respondents will be kept strictly anonymous and you will at no point be asked to provide information...

Sorry, I forgot to mention! There is one restriction on respondents - I'm not accepting responses from anyone under 18. This is chiefly because anyone under 18 cannot be guaranteed to be providing informed consent to have their answers shared for the purposes of the project. This is why the part which asks for age doesn't go any lower than 18. 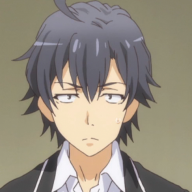 I just filled it out!

Hate to bump, but I haven't gotten any new responses since Monday, so I need some more. Let me know if I'm being a bit too pushy.

I just filled out the survey. The idea sounded intriguing, so hopefully you'll get enough responses for your research project.

One point of criticism I have is that some terms could have been explained better, especially if you want responses from non-native English speakers. For instance, the question about individualism vs. non-individualism was a bit unclear to me: was it supposed to mean something along the lines of individual-oriented vs. community-oriented? I've never seen 'non-individualism' used as a term elsewhere, so I ended up doing some Googling.

@Punamaagi Thanks! That's what I was going for, yeah, but I wasn't sure what the correct term was (I was considering something like 'collectivism' but that didn't feel right), so I thought just using 'the opposite of individualism' was a safe bet. I might tweak that around a bit; this is my first time running a survey, so I'm taking this all as a learning experience.

Update on that: I changed it from 'non-individualist' to 'conformist' since that's what the closest to the spirit of the phrase I intended. I hope that's a bit clearer, but let me know if it's not. : )

Hmm... that makes sense. So it should be 'collectivist', then?

Yes, in my opinion. 'Collectivism' or 'Collectivist'.
I can understand you not wanting to use it because of its broad range of use. And how it can possibly refer to a set of political beliefs.

However, since people would first read 'individualistic', and see 'Collectivist' as its opposite. They would easily understand it refers to people working together in groups. (And won't take it in the political sense.)

I see! On reflection, that's probably more helpful for me since it pertains to work culture and whatnot. Collectivist it is, then.

One thing I bumped into that might throw of the answer a little though :
The age of ppl I believe play games is much broader then the answers allow me to as I could only pick one very specific age range so that answer is in no way what I think nor what I know to be true.
Letting ppl choose any number of answers there would give a much more accurate answer.

EDIT: a second thing is do you feel your artistic view clashes with the market - I picked maybe though the real answer should be 'at times' and i miss a follow up question wether or not I would find this a detrement or not.

Thanks! I appreciate the feedback. I can see what you're getting at, but narrowing things down so the respondent has to use their judgement as to which one is 'closer' is part of the point. The 'Maybe' answer for that second question I felt covered any instance in which it might be ambiguous, in my opinion.

Prez said:
narrowing things down so the respondent has to use their judgement as to which one is 'closer' is part of the point.
Click to expand...

Then I wouldve more prefered the choice to be ' kids, teens, adults, etc'.
The en again its prolly Just me lol

Prez said:
The 'Maybe' answer for that second question I felt covered any instance in which it might be ambiguous, in my opinion
Click to expand...

That could be due to the fact that english isn't my native tongue. To me it felt more like an 'I dont know' then an 'at times it does' but that's fine.

In any event, good luck

Hyperly
I'm moving on from RMXP finally. I've been stuck in a difficult decision between XP and MZ, and I've given up and moved on to MZ. Overall I'm really liking it, I wish tilesets were easier to setup like XP, but it's actually not that bad!
27 minutes ago •••

TheGentlemanLoser
Have you ever gone full 'Ship of Theseus' while frankenspriting? Because I just did.
58 minutes ago •••