yes it should be avoiding non-passable tiles. as long as the x, y are the correct numbers and that ending location is a passable tile.
and what do you mean by "full move route" it is only 1 command 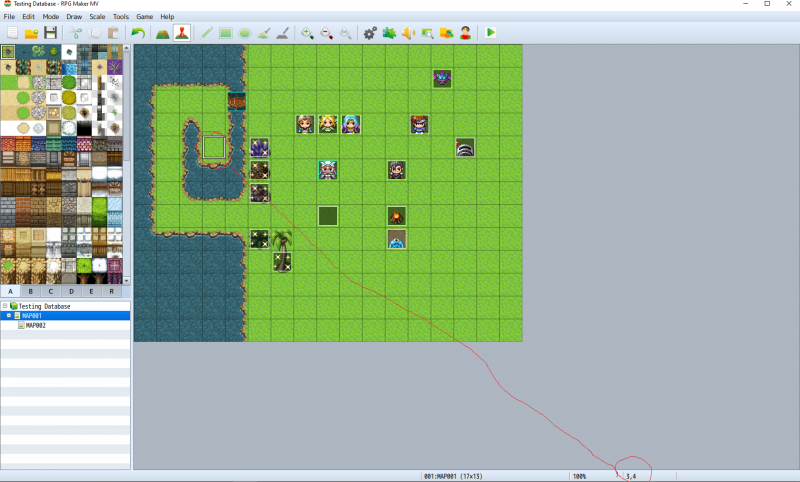 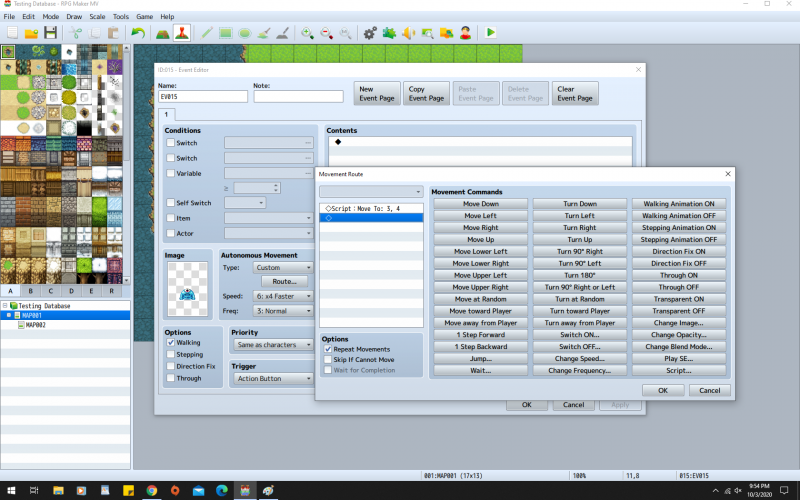 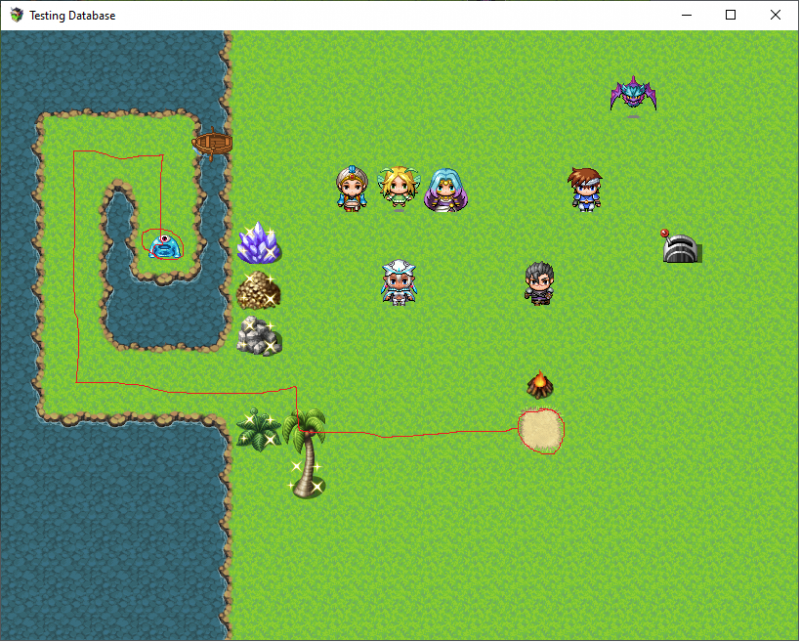 It would appear you are a genius, my friend. I need to do a little tweaking, but it is now working more or less as intended. I have a couple more issues I'll drop in here later on, but the major part is out of the way and I can't thank you enough!

Tiamat-86 said:
yes it should be avoiding non-passable tiles. as long as the x, y are the correct numbers and that ending location is a passable tile.
and what do you mean by "full move route" it is only 1 command
Click to expand...

By full move route I mean manually inputting the movements, up 2, left 5, etc. That's how I have it now and it's working, the MOVE TO: command is not doing the trick.

Edit: So on the way to her daytime spot, MOVE TO: has her trying to walk into the river. Basically she's stuck. However on the way back to her sunset spot, the MOVE TO: command is working fine. I'm not sure why, but on her way out, she likes to go to the left even though there's nothing passable that way.
Last edited: Oct 4, 2020

I worked around that MOVE TO: problem by just putting a bridge over where she was trying to get across. Not how I really wanted to handle it, but it doesn't hurt anything. A new issue I noticed is that at sunset, when she is supposed to return to camp, she won't start moving until I move my character a couple of tiles upwards, like it wants me to be within a certain distance of the event before it'll activate the move route command.

this is an issue with maps larger then just a room when using autonomous movement because the movement wont trigger unless you are close enough to it.
its a lag thing if to many events are moving at the same time.
for events that you want to move even when off screen,
at the top of the event where you see note put
<Always Update Movement>

edit: the event is repeating each day now at least right?

Yes, event is now repeating as it should, and that always update movement notetag on the event fixed the other problem, I believe we are good to go on this one! Thanks so much!

This brings me to my next problem which we talked about briefly early on in this whole ordeal. The NPCs are scheduled and working exactly as they should. Now I need to figure out how to keep them in place so if I leave a map and return to it at the same time, they don't repeat the move route that takes effect at the start of the daypart.
And if I enter a map in the middle of one of the dayparts, I need to show the NPCs already at their positions. I only want them to move if the player is present on the map when the time switches.

saving position is possible with another yanfly plugin. makes "move to" route commands even more important. (just changed to sunset and enter a shop b4 NPC reaches the campfire. leave shop at night NPC still not at campfire but turns to start walking home)

having NPCs just start at their mid day locations when enter town would require an autorun event when entering town. would add a switch that turns on when hit the transfer event to go into town.
then in the corner of town would have an invisible event autorun (not parallel) when the switch is on.
this event would check "if sunrise: teleport these events to their x , y's and make them face the right direction" if dusk switch teleport these events" ect... and would end with turning off the transfer autorun switch.

I'm still having trouble with the MOVE TO: command on one of the NPCs. The Save Event Locations plugin I think is what you're talking about? It sounds promising but I'm curious if I use that and leave the map while the characters are in the middle of a move route, will they continue the move route when I re-enter the map, or just stay where they were when I left?

So far so good. Is there some trick to getting an event using the MOVE TO: command to NOT get hung up on non-passable tiles? With the first NPC we worked on, it was a fairly simple fix of adding a bridge over the water. For the second NPC, re-doing the part of the map he's trying to walk through will be a bit more problematic.

Yeah, I'm not sure either. And actually, the first time trying to run it, it didn't work. I set the move route manually and that was fine, then when I went back to MOVE TO:, it also worked fine, but I find I'm having the same issue during another move route on this NPC. It's very strange. I'm going to keep poking at it and see what I can make happen.

So this NPC (we'll call him NPC 2) is giving me some serious trouble. The move routes are working mostly, I'm not concerned with that right now. An event is triggered which allows the player to interact with these two NPC events, resulting in NPC 2 leaving the map to the north. That works fine. Now, if I leave and come back to the map while the sunrise switch is on, this NPC reappears at that north exit and tries to make his way back to the sunrise position. Now, because he has autonomous movement already set for sunrise, I have the move route that takes him off the map actually on NPC 1 (I believe you can see it in page 5 of the screenshots I included earlier), and I think this is the cause of the issue but I can't figure out a better way. I'll walk through the process here with screenies.

Step 1 - player triggers a cutscene by walking over an event. There are multiple instances of this event, so the player isn't going to miss it, this cutscene WILL occur as long as it's sunrise or daytime. This event has 2 pages, one triggers at sunrise, one triggers at daytime if the conditions are met. Other than the switch, the pages are identical and this is the case for all 3 events involved in this mess. 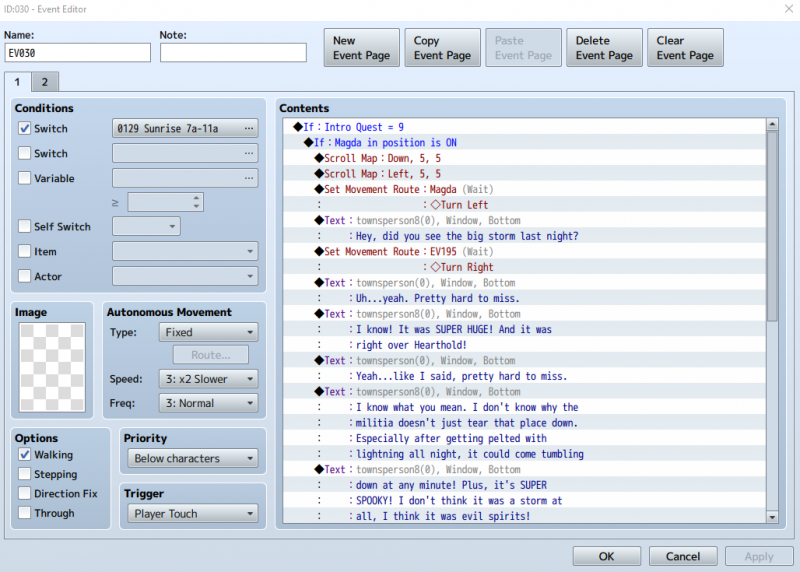 After that brief cutscene, the player can talk to the male NPC which moves this along. 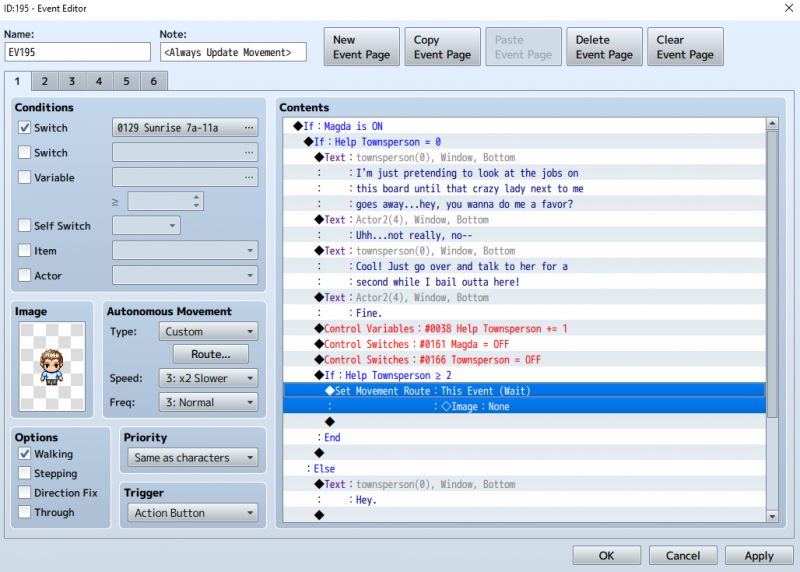 And lastly, the above NPCs movement during this scene is contained in the first NPCs sunrise and day events: 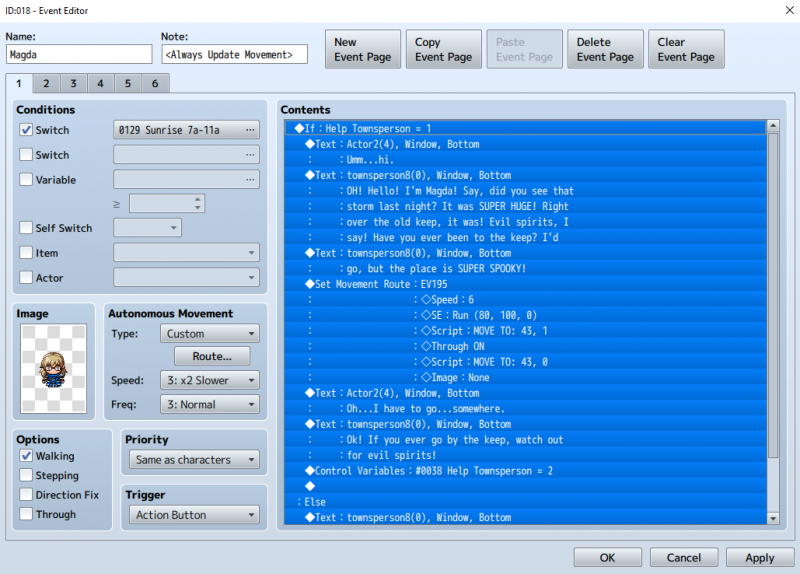 So once this sequence of events is completed, I need this NPC to leave and stay gone until his scheduled return at night time. This also only needs to happen the one time, at the start of the next day he should adhere to his normal schedule which is sunrise > spot 1, sunset > leave the map, night time > returns to the inn on this map. There are switches and variables and what not to prevent this cutscene from triggering again after the first time.

this is where you would use a quest tracker variable.
see you already have 1 going with the help townsperson variable
trigger event, blah blah blah, NPC leaves, set variable to 2

now the event will get locked on this page until it turns to night.
as soon as the variable changes it will revert back to the normal schedule.
you can also have other events that make you leave town also check if this variable is at 2 and change it to 3. because you might not be back until the next day and the NPC would still be missing.
or might sleep at the inn and skip "Night" entirely

So this definitely works for making him disappear, but he also never comes back. Here's a shot of the event page, is this what you had in mind? What does setting the variable to 3 accomplish? Should we be setting it back to 2 at some point? 2 is basically the end of that "quest." 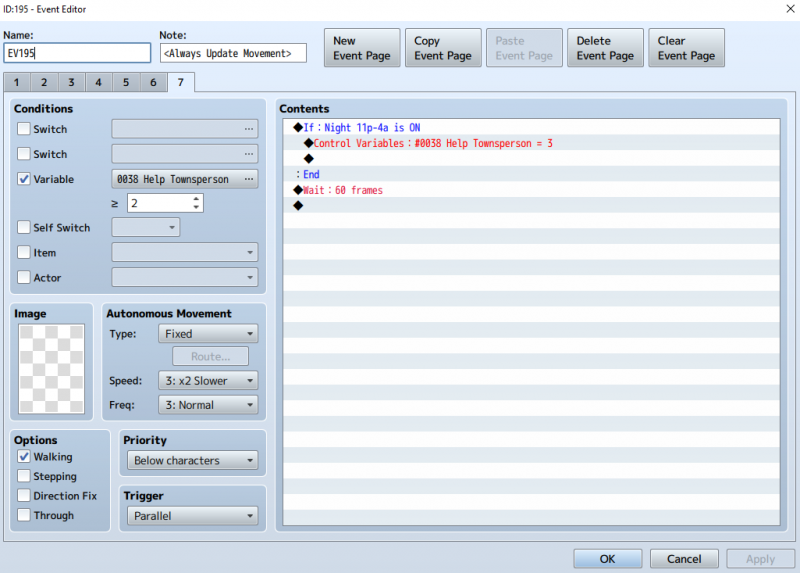 This should be the last thing that needs sorted out. Only a few other NPCs are scheduled and none of them have any real complexity to them, just Point A > Point B w/ some dialogue > back to Point A.
Last edited: Oct 9, 2020

right, variable only good for progressive dialog. change it to a switch then

Tiamat-86 said:
right, variable only good for progressive dialog. change it to a switch then
Click to expand...

That seems to have done the trick. Also, there is one more thing I forgot about - how do I make the characters appear in position when I move to the map after the day switch has been flipped? Like the 2 NPCs you've helped me work through, they make their first move when sunrise is flipped on, but if sunrise is already flipped on before I enter the map, is there a way to make them appear at their destination rather than walk there? This one is NOT a big deal at all and I can definitely make do without it.
Last edited: Oct 10, 2020

mentioned this before.
make a map transfer switch. make events that transfer between maps turn on this switch just before transfer.

(can also be used to check for storyline ques to change the music when loading in.
war music, festival music, spawn event enemies/NPCs

That's it. I'll probably have more questions as time goes by, but you've given me a great base to build off of and I can't thank you enough!