So this is going to be a bit of a hard one I think, but I'll try to go over this as well as I can from a non programmer's standpoint.

I am getting the object too deep error, and have narrowed it down to 2 conflicting JS plugins. The first is a plugin that summons an actor to the battle: http://sumrndm.site/summon-core/

And the second is a JS plugin that expands on restrictions in the game (such as needing to have a state to use a skill, or be a certain class): https://forums.rpgmakerweb.com/index.php?threads/bobstahs-enhanced-equipment-item-items-command-skill-and-skill-type-restrictions-1-5-3.49224/

These 2 plugins work fine when running together until I actually put a restriction on a skill - it doesn't actually matter what skill as long as the actor using the summon ability has it learned, as soon as I use the tag, I will get this error. Here is how to replicate the bug: After restricting a skill (what I was using
<Restrict>
State: 998
</Restrict>
)
Go into combat and summon an actor using the plugin. On the next turn, when you go to your skill menu the game will crash and you will get the error "Object too deep."

After looking around for hours I found that this may be caused by the two plugins using the same variable perhaps? I'm not sure at all, since I am really bad at programming. If anyone could help me out on this, it would be greatly appreciated. Both of these plugins are core to my game, and without them a looooot of things won't work in the game.

Thanks for your consideration~

KawaiiKid said:
I am getting the object too deep error, and have narrowed it down to 2 conflicting JS plugins.
Click to expand...

Thank you for narrowing it down to two plugins, that makes it a lot easier for other's to reproduce your bug & then try to squash it.​
The next step that would really help are:
Let me explain this step by step & how a good bug report is made using Sharm's bug report on MOG_CursorBorder as a sample of a really good report that made it easy to find the bug and stomp it:

First she explained the bug clearly in one sentence:

Sharm said:
The default border is correct, circling the character only, but Mog's extra border goes around the entire character section, or off screen when selecting the second character.
Click to expand...

Third (you have already done this), she explained where to find the two plugin's so we could reproduce the bug:

Without clear instructions from you, it could easily take them even more hours to stomp your bug. Thus solving bugs is a cooperative process between the bug reporter & the people trying to stomp the bug.
​
Thanks,

Joy Diamond said:
P.S.: Sharm's instructions were very easy to follow. And good bug reporting by making this on a very simple project that easy to reproduce.
Click to expand...

Alright, going off what I said above, I've recreated the bug in a demo file you can find here:

https://www.dropbox.com/s/ldtvbzvgwggc8gl/Summon Test.rar?dl=0
(I've removed almost all the sound and images from the folder to reduce the size of the download)

After loading the plugins, the first step is to make an actor that will be summoned into the battle. For the Demo I named this: "Summoned Thing" 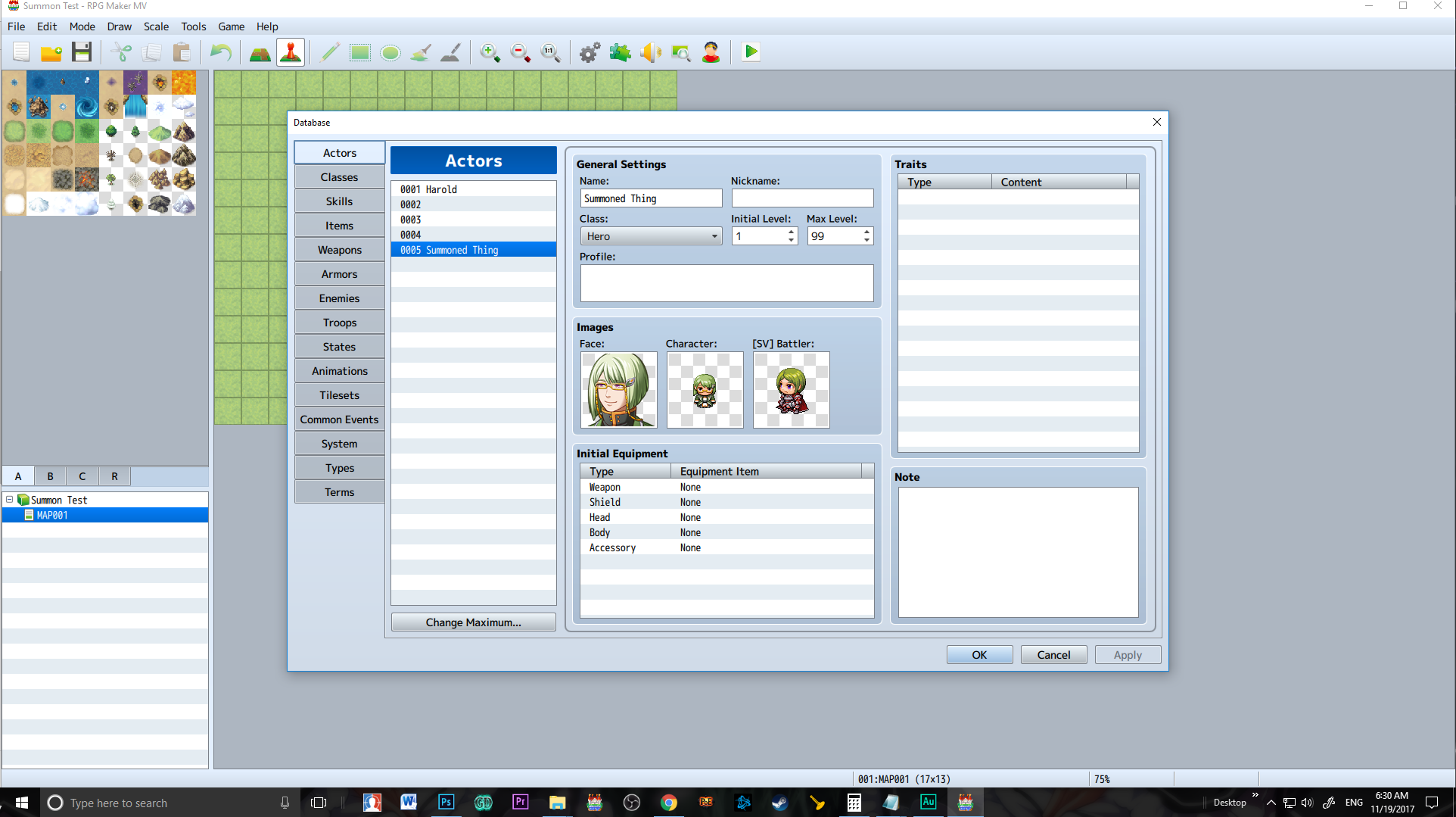 Next is to create a skill that will summon him. This is done by creating a spell, and placing the following in the note tag:
<Summon>
Actor ID: 5
<End Summon>
The actor ID being the actor who will be summoned into the battle. 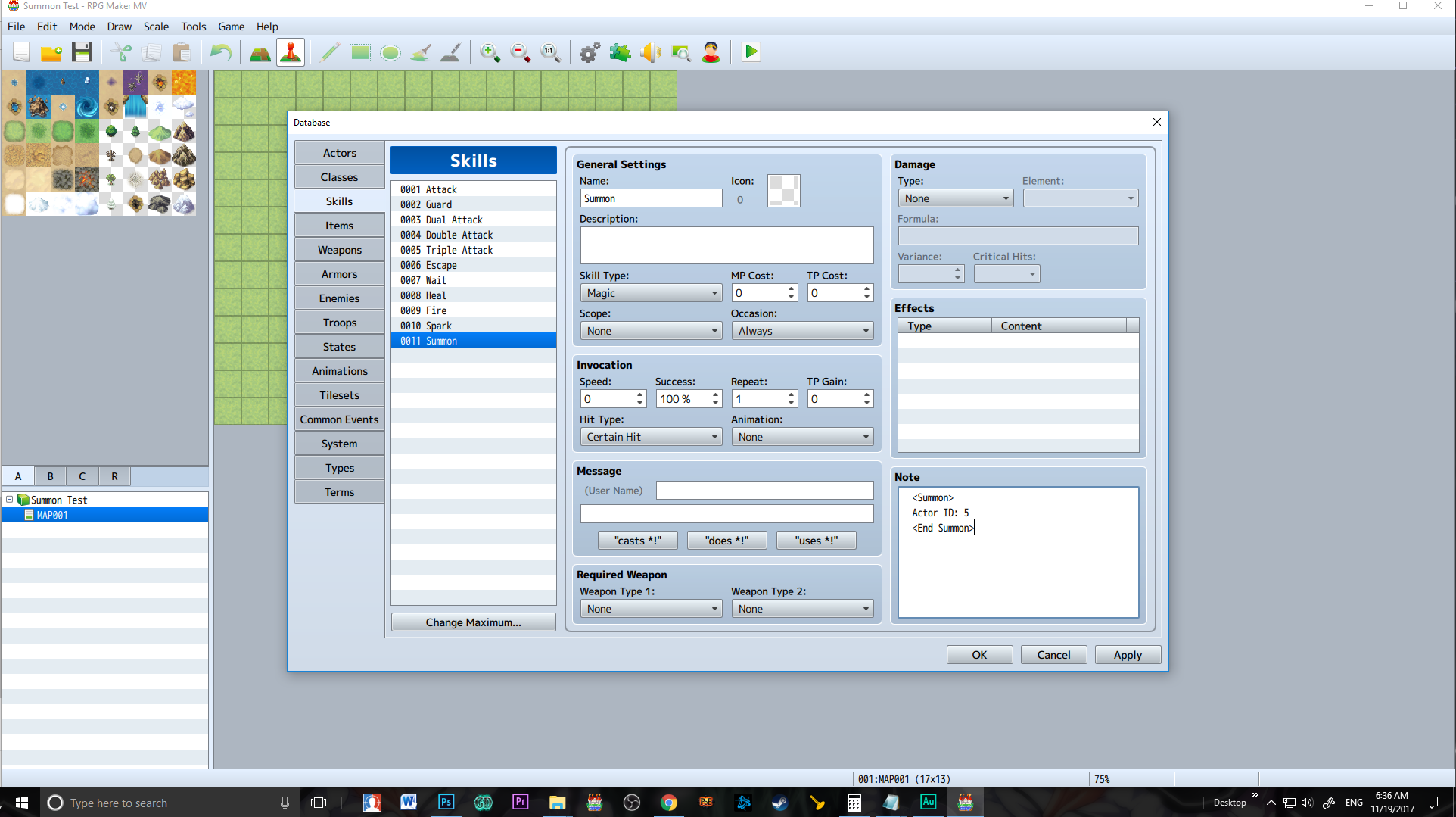 So far this has all been for the summon plugin, which works fine. You can go into the demo and fight, and you can summon the enemy and cast spells without hitch after this. Next we will move on to the Restrictions plugin. For this we will add the following notetag to the skill "Fire"
<Restrict>
LevelMin: 1
</restrict>
This will tell the plugin to only allow the actor to be able to use the ability if he is Level 1. This bug can be replicated with any restriction tag, I'm just using this one as an example. 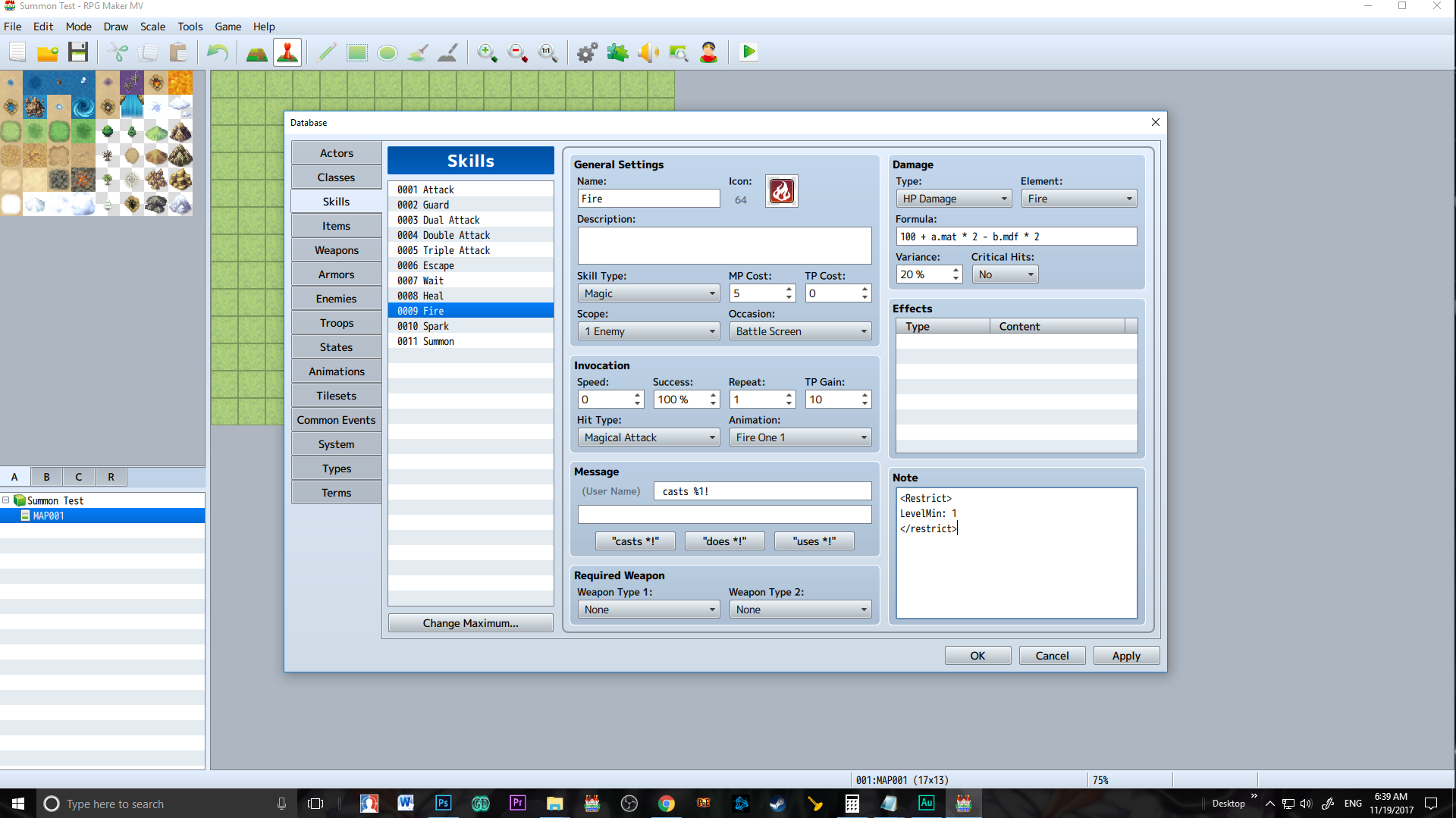 Make sure to give your actor both the Fire spell and the Summon spell so you will be able to use them in game.

Now to replicate the bug.
Play test the game and enter battle by talking to the npc. Once in battle, use the Summon spell to summon the actor to battle. In this demo he won't be visible due to being designed to work with the side view battle system, but I can assure you this works when implemented, I've just omitted it to cut down on file size and to reduce the chances of interference from other plugins during this test. Once it is your turn to act again (not the summons) go to your skill menu, and the following error will appear. 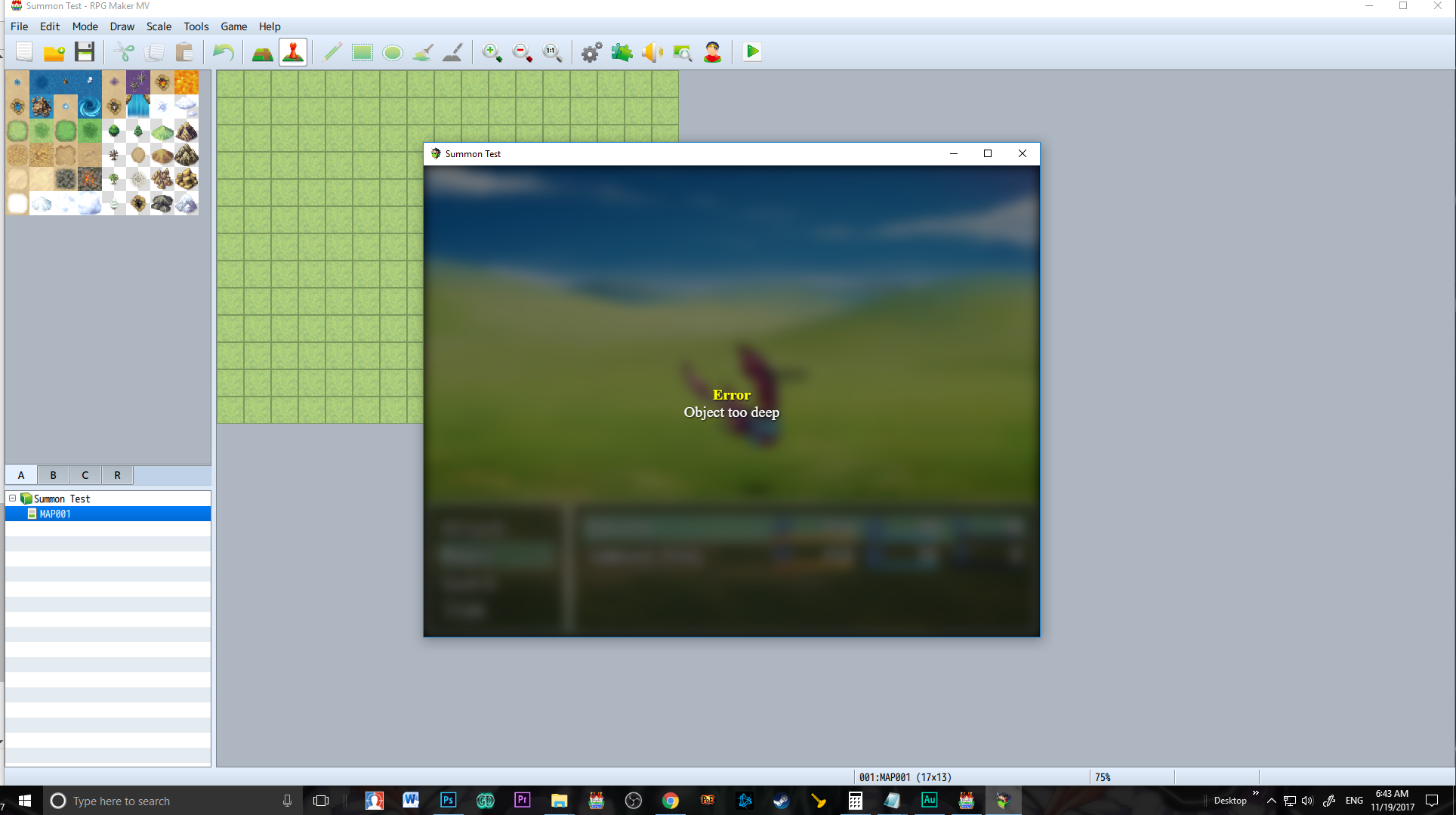 Thanks for your time.


KawaiiKid said:
Alright, going off what I said above, I've recreated the bug in a demo file you can find here:

KawaiiKid said:
(I've removed almost all the sound and images from the folder to reduce the size of the download)
Click to expand...


KawaiiKid said:
I've also made a video replicating this bug that can be found here

Wow - Very nice. I watched the video & it makes it super clear how to reproduce the bug:

The bug is triggered inside of the rpg_core.js as a recursive call. These are hard bugs to find ... sometimes very hard ...
(NOTE: The bug is probably not in rpg_core, but just triggered there ...) 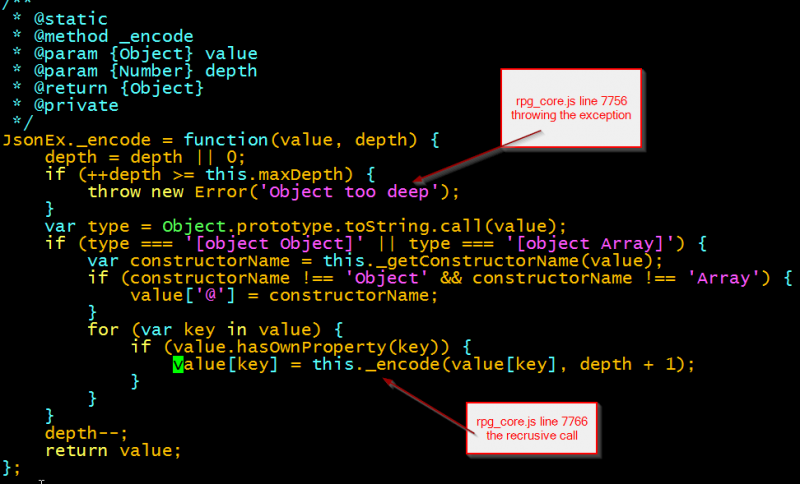 Ok, this is looking a bit more positive ... It is probably a recursive object that is self-referential from one of the other two plugins that is causing this bug ... 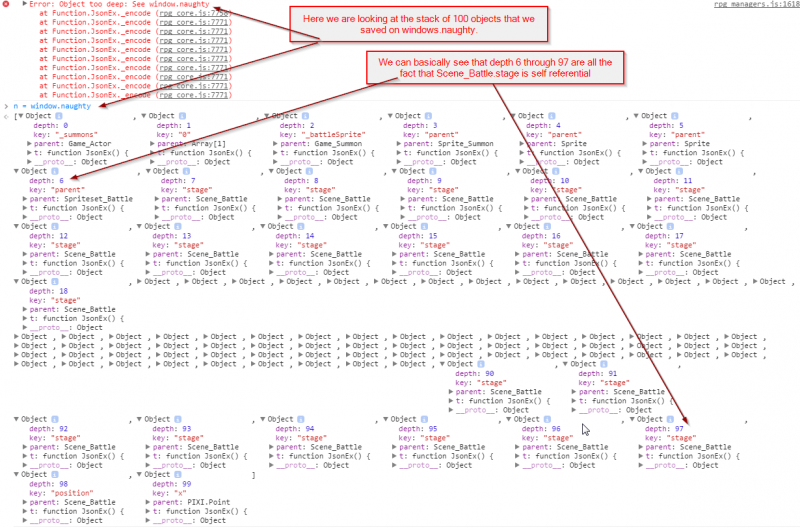 View attachment 76606
The bug is triggered inside of the rpg_core.js as a recursive call. These are hard bugs to find ... sometimes very hard ...
(NOTE: The bug is probably not in rpg_core, but just triggered there ...)

View attachment 76608
Ok, this is looking a bit more positive ... It is probably a recursive object that is self-referential from one of the other two plugins that is causing this bug ...

Joy Diamond said:
Update: After looking at this 3 & a half hour, I have a very good idea of the bug. How to fix it is another matter though ....
Click to expand...

I have some good news for you:
The good news is a major one of these bugs has been fixed with 1.6.0 Public Beta Test

​
This second bug in Bob_EnhancedRestrictions.js still needs to be fixed; however, major progress ​


The second bug, third & fourth bugs were found while working on this bug: Object to deep.


There are two bugs from this in RPG Maker MV CoreScript (this is the game engine that RPG Maker uses & is the js/rpg_*.js files in each game).


View attachment 76632
The second bug has already been fixed (not by me, by someone else), and the fix can be seen in https:/js/rpg_core/JsonEx.js lines 111-160 (this is the github repository for the RPG Maker MV CoreScript):


View attachment 76634
(NOTE: You can Compare this to the previous spoiler, which shows the current version of JsonEx._encode before the fix)
​
The fourth bug is in BOB_EnhancedRestrictions.js:


View attachment 76636
NOTE: The bug was not in Ellye's State Damage plugin & to fix the current bug report by Kawaiikid we need to, instead, get at the root of the problem in BOB_EnhancedRestrictions.js.​
​
Last edited: Nov 25, 2017
You must log in or register to reply here.
Share:
Facebook Twitter Reddit Pinterest Tumblr WhatsApp Email Link

RavenBlueIndigo
Stream will be live shortly! Going to do another art stream tonight so that I can finish my Fauna Focus piece~ Feel free to drop by!
24 minutes ago •••