Hey, I am a week late to the party, but since everybody's advertising here, why the heck not:

Story:
The game tells the story of Lucy a young wizard that became a pirate who was thrown overboard of his ship and rescued by ninjas who trained him in their hidden village. He later died defending said village from a zombie attack, only to be brought back to life by a scientist who had to replace some of his vital organs with robot parts.

All this so he could prevent an old prophecy, which tells, that the son of the the dark one will return from the dead and collect all six holy crystals to open a portal to the netherworld and usher in an age of darkness.

Features:
- Explore 4 one room dungeons with excitingly trivial cliched puzzles
- Loot every piece of furniture in town
- Recruit 1 of 4 groups of total imbeciles

Thinking of what to do next

Pirates AND ninjas? Maybe I should play this one... 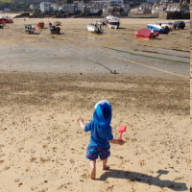 The story is totally genius . Will have to download this later!

The artwork reminds me of South Park, I am going to try this out later.

OnslaughtSupply said:
The artwork reminds me of South Park
Click to expand...