RMXP PATH OF THE PLATFORMER 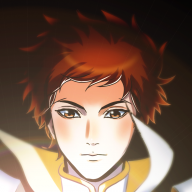 SYNOPSIS
'To Find the Philosopher's Stone', also known as 'Path of the Platformer' is an action orientated RPG Game with simple gameplay mechanics. Its gameplay functions much like the Dragonball Z Legacy of Goku Games. The game is one straight path journey where there is minor backtracking. Puzzles are hardly relevant and are more based on exploration. Join Quinton Strider on his quest through the Myriad Realm to find the Philosopher's Stone. He'll encounter fiends and monsters on his journey and be assisted by other adventurers who too have found themselves seeking treasures. Its a simple hack and slash game with power level rpg mechanics. It utilizes the Blizz ABS System to the maximum (Generally an action hack and slash system designed with a powerlevel rpg mechanics, its the most advanced ABS System in RPG MAKER XP has to offer which is the engine it has been designed on).

DEVELOPMENT
Currently the game is in early stages. A demo has been planned for a showboat release which will give you an idea of what the game is about. It should end after the first boss is defeated.

STORY
Seeking the Philosopher's Stone to unlock all the powers of Ken and embark the path to ascension, Quinton Strider, a blade warrior specialist is shown the way to the Myriad by a know it all alchemist and martial artist, Karin. She tells him that in the Myriad, he can find what he seeks offering him assistance on his journey through esoteric connections. With this in hand, fearless Quinton would journey deep into the Myriad to find what he seeks. 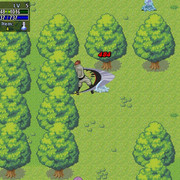 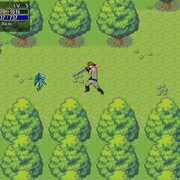 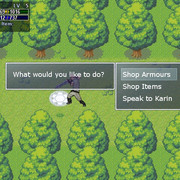 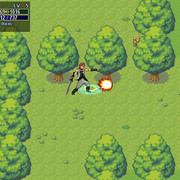 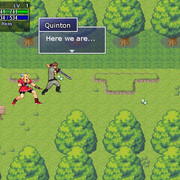 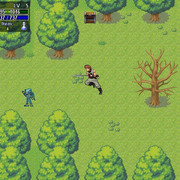 Just added a gameplay video to the thread page. Check it out.

Ok, anyone want to try the demo release of this build. You can tell me what you think of the game and if there's anything about the system used that you didn't like.

I think I will give this a shot next chance I get. It's the least I can do, since you have been helping me with my book.

I have to be honest. I noticed a lot of issues.

_ this is probably just because I have a very old computer, but I noticed a lot of slow down, especially in areas with a lot of enemies.
_ the main character can only attack what is directly to his sides. The swords hitboxes are very small, and don't seem to extend outward to the edge of the blades animations. Lining up attacks is difficult. Same problem with the fireball.
_ enemy AI seems to take advantage of that. unfortunately, enemies can attack you from any direction, and they can just go around you to avoid being hit. bigger hitboxes on your sword might help remedy that.
_ the game crashed when I tried to use a high potion. It says that animation for when he uses a hi potion doesn't exist.
_ Do I really need to hold down the Escape key and the Direction buttons in order to access the menu? Can't the escape button be enough?
_ it took me some trial-and-error to realize that the enter key accessed the pentagram and opened treasure chest. I don't think it was mentioned in the tutorial.
_ when I hold down the E key and run left, I'll notice a white column in the main characters Sprite.


in spite of its problems, I still had quite a bit of fun with this. it was fairly challenging, and it made me want to play more. I also liked that you added a defend key That lets you run away from enemies without having the fight them, in case you are low on life. Overall, it's impressive what RPG Maker is capable of. I hope someone with a more powerful computer can try this game out and give you more feedback.
You must log in or register to reply here.
Share:
Facebook Twitter Reddit Pinterest Tumblr WhatsApp Email Link