Hey everybody! I am looking for folks to playtest a game I’ve been working on.

Story Pitch
Watch knights, mages, orphans, warlords, princesses and fishermen struggle to stay true to their hearts. Explore a world of castles and empires, built on the ruins of a civilization shattered to save a dream thought lost. Help nine people find their paths and resolve a promise kept, when it was fated to be broken.

More Info
The game is a ~25 hour character \ story focused RPG built in a heavily modified version of VX Ace. It’s fairly dialog heavy with an operatic bent, so expect rich characters and big drama, with a touch of saving the world. Mechanically, the game is a puzzle game, where the core puzzle mechanics are couched in on-map (not battle screen) combat. The analogy version would be that the story was inspired by FF6 and the combat mechanics by Zelda.

Right now, it’s in an ‘alpha’ release, so the narrative and mechanics are fairly well developed. The main story can be played through to completion, albeit with a rushed final fifth. There are six finished dungeons and reasonably polished combat mechanics. Art is still mostly VX Ace in-box or placeholder. Overall, I believe you will get a fairly complete and (hopefully) satisfying experience, despite the game being unfinished.

What I’m trying to measure with this playtest is how fun and engaging it is. So I’m interested in questions like: Do you like the characters? When did you become interested in the story (if at all)? What mysteries in the world intrigue you? Which dungeons felt good (or bad)? Which parts did you find easy or hard? Are there characters or abilities you really like or hate? &tc. I don't need you to test\try and break the game; I just want you to play and enjoy it

If you are interested, send me a message here or at LongJourneyToFarewell@gmail.com, ideally including a short blurb about what games you normally play\like. I’ll send you instructions and a build link! 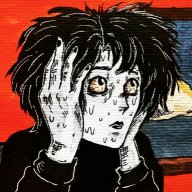 Albeit i've only played for one hour, i'm absolutely speechless, this is some very high quality content. The controls are fine, the visuals get the job done and tell the story in a very believable way (it surpasses some of the clunkiness of RPG Maker to create "cutscenes"). It does its cutscenes in a very competent way. The music is very good too, i don't know if it's original or not but it fits well and is pleasant to listen, the use of sound effects is also very good. The gameplay is the star of it all, it's very engaging, systemic and interesting, i was hooked the entire time in the stealth sections. The tutorials are also very well presented. I had some hard times as you can see in the video, but i managed to overcome them. I haven't bought too much into the characters but i can say the main character, Demyra, is super charismatic. The game has a very fun vibe to it. Sadly it crashed when nearing 1 hour of recording - maybe it was because the file was getting too large?


See, i got stuck at around 45:25, which forced me to use the debugging tool to force my way through. Nevertheless, what an amazing piece of content. This project is being criminally underrated, this deserves way more attention than what it's getting.

Kudos to you! Outstanding job! I might come back after i finish the demo.
Last edited: Jul 3, 2020

Alright, i just went through the "Combat" demo until i got stuck and didn't know how to proceed. I also recorded a playthrough here:


It feels incredibly rewarding to play and it's really fun to "solve" the combat puzzles - it requires attention, dexterity and critical thinking. Only, a note: I liked the gameplay so much that i was eager to keep playing it, meaning that dialogue usually felt like downtime. The writing is good but i feel like i need more context and "buildup" to really feel connected to the characters.

I can't imagine how much effort you put into this and i'm glad you did, because it sure pays off. It's very well constructed.

Wow! Thank you so much I am really, really glad that you played it and liked it! You had some awesome feedback; lemme do the stuck parts first.

The Stucks
In the combat demo, I think what's happening is that there's another route to go. The blue is what I think you did; the red is showing the other way forward. Just down those stairs in the upper right is the blue lever you need to open the way forward on the bottom floor. 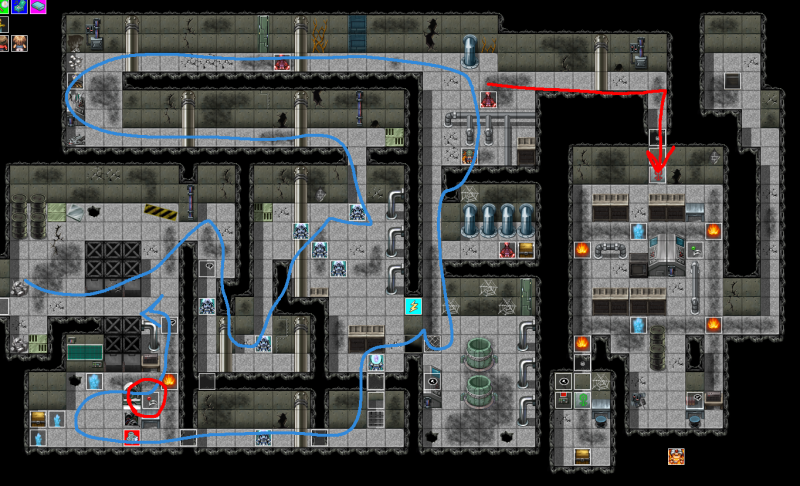 Lemme know if that's not it!

For the mansion, you totally found a bug I can't debug it right now, but those running knights are supposed to start running again after they get stopped... I am totz not sure why they got stuck, but they definitely did. Thanks for finding that!

The Crash
Was the crash a total crash to desktop? Like you're playing and then foomp, the game is just gone? And further, did the crash happen after you died and were being reloaded? If so, then I am actively trying to figure that one out, but it's super hard. I have a post here begging for help: https://forums.rpgmakerweb.com/index.php?threads/vx-ace-game-crashing-to-desktop-on-load.123534/ I think it's something in the RPG maker engine crashing, and I'm somehow setting it up for that. Maybe it has to do with disposed bitmaps being used in bad ways... but that's a total random guess b/c I have no stack trace and no reliable repro (it def happens... just not consistently)

The Game
I am so, so glad you liked the gameplay. Originally, I'd intended to just make a visual novel, but I really like making gameplay, so I slowly glommed on mechanics. I'm vaguely amused that the gameplay is now the star I do think that your comment about 'not having bought too much into the characters' is spot on; I've heard the same from other playtesters, and I'm working on a fix now:

I had an older version of the starting sequence that I think did a better job of introducing the characters (I changed it to get people into the stealth dungeon faster... irony). I am going to see if I can pull together a rework of that starting sequence to give you a bit more time with Elian + Demyra. I think their interactions are what really made them work as characters and that's waaay later now, which is bad. I would love for you to play that version when I get it done and tell me if you think it works better. I got your mail about the full alpha; I will send you a link later today!!

Lag
Ha. Ha, I say. I say that because I have spent about half my life dealing with lag, it seems And I still think it's a fairly giant problem on (say) laptops running on battery power. Or, said another way, the game is still surprisingly CPU intensive and since RPGMaker runs on a single core, it doesn't use modern hardware very well. That said, here's some things:
1) My entire combat engine is implemented directly in ruby, rather than using events. At some point the complexity of using events to do it all was too high. That is an absolute ton of code (like prob 5,000 lines), but it allows me to be more efficient than purely using the interpreter.
2) I use a modified version of Theo's Anti-Lag scripts. The modifications were mostly removing stuff (that might not have worked well with my engine modifications). Streamlining some of the event and sprite updates is the big thing I'm using it for, as well as the x\y lookup table for grabbing events at a position (which I use a LOT for doing attack and visibility processing).
3) There are some issues with how the underlying RPG Maker engine handles frame updates. I wrote a script (I believe a fairly recent version is here: https://forums.rpgmakerweb.com/index.php?threads/how-does-vx-ace-limit-frame-rate.113973/) that takes control of frame update timings in ruby. It doesn't actually make your game run faster, but it does prevent the RPG Maker engine from sleeping at bad times during frame update, which results in (for me at least) a dramatically more stable frame rate.
4) Beyond that, I have a profiler I wrote... but I am not super convinced it works well. But, I've had to do (and intend to continue to do) specific optimizations to my code to speed up frame updates. If I can ever get my profiler to feel reliable and useful, I will share it out for other folks who are trying to optimize their code.
Last edited: Jul 4, 2020

Mhin Ra said:
The Crash
Was the crash a total crash to desktop? Like you're playing and then foomp, the game is just gone? And further, did the crash happen after you died and were being reloaded?

You can actually see the crash happening at the very end of the video, here: - around 55:20. Yeah, CTD.

Mhin Ra said:
Lag
3) There are some issues with how the underlying RPG Maker engine handles frame updates. I wrote a script (I believe a fairly recent version is here: https://forums.rpgmakerweb.com/index.php?threads/how-does-vx-ace-limit-frame-rate.113973/) that takes control of frame update timings in ruby. It doesn't actually make your game run faster, but it does prevent the RPG Maker engine from sleeping at bad times during frame update, which results in (for me at least) a dramatically more stable frame rate.
Click to expand...

I actually just implemented this into my project and things now do seem smoother.

Keep up with the good work, i think i'll start playing the alpha tomorrow. I'll certainly record myself playing it.

Awesome! I am working on some tweaks to the intro, and I'm still banging my head against the CTD. It's a doozy Please tell me how your playthrough goes!

Hyperly
I'm moving on from RMXP finally. I've been stuck in a difficult decision between XP and MZ, and I've given up and moved on to MZ. Overall I'm really liking it, I wish tilesets were easier to setup like XP, but it's actually not that bad!
3 minutes ago •••

TheGentlemanLoser
Have you ever gone full 'Ship of Theseus' while frankenspriting? Because I just did.
35 minutes ago •••