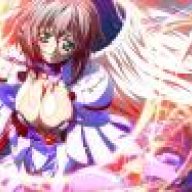 Okay guys I'm very confused and stuck with a certain type of puzzle.

I'm trying to make a switch puzzle, the one where you have to flick certain switches in order for a door

to open and then you can progress in the game.

to me how I can make it work for myself.

I'm trying to make it so you have to flick three switches in order for the door to open, doesn't

have to be in a particular order it just needs to be a certain three. 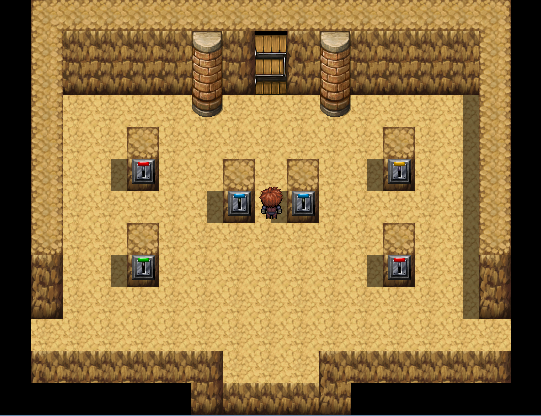 I've moved this thread to VX Ace Support (Tutorials is for people to post tutorials, not to ask for help on how to do something).. Please be sure to post your threads in the correct forum next time. Thank you.

I'm going to call them LEVERS, because using the term SWITCH for the visual things you've got on the map and the engine's internal switches that are true/false/on/off (the logic ones) is just going to confuse things.

Do you want the levers to turn off again if the wrong ones are turned on? Or should the player just have to keep trying different combinations until they get the right one?

If they have the correct three turned on but they also have one or more INcorrect ones on, should the door remain closed?

On each page, after the Control Switches command, add a Call Common Event command. Every event, on both pages, will call the SAME common event.

Now set up your common event (do not set it to parallel or autorun). For my example, I'll say switches 1-6 refer to levers 1-6, and the door will be opened ONLY if switches 1-3 are on, and 4-6 are off (so the conditional branches are checking for the OPPOSITE result - saying if 1-3 are off or 4-6 are on, we're going to stop checking because the correct levers aren't turned on):

Anyway - that'll get you pretty close. Any extras that you do will depend on what you want to happen AFTER the door has been opened the first time.

Hey Shaz thanks for helping me out and putting this topic in the right place.

The way you explained how I want the levers to work is correct.

Okay, so I think I understand what your talking about but I'm still trying to get my head round how to do

on the right tracks or not. 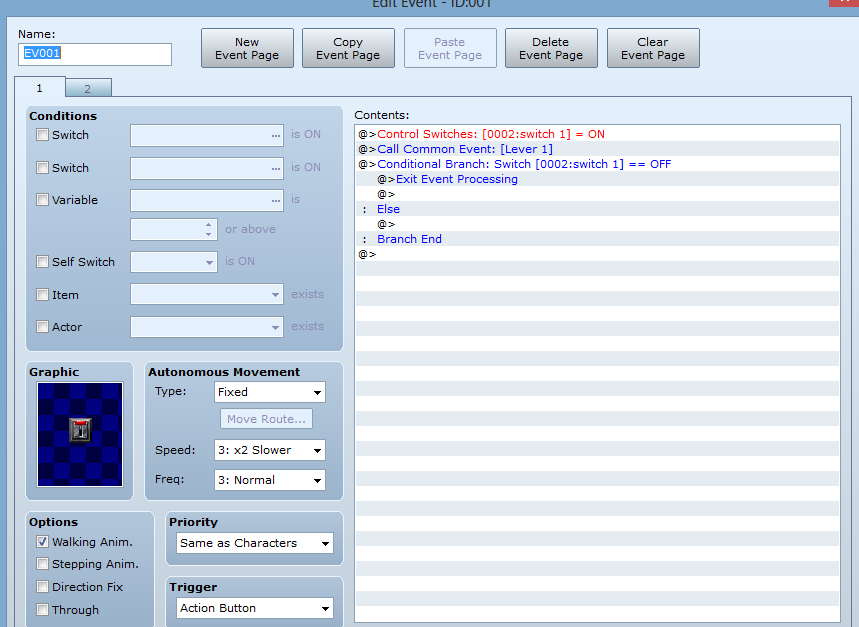 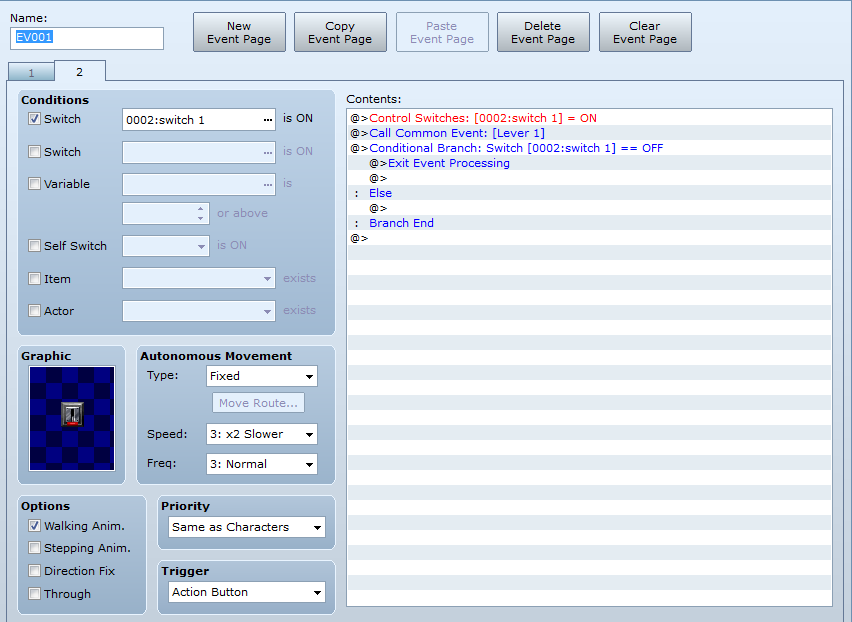 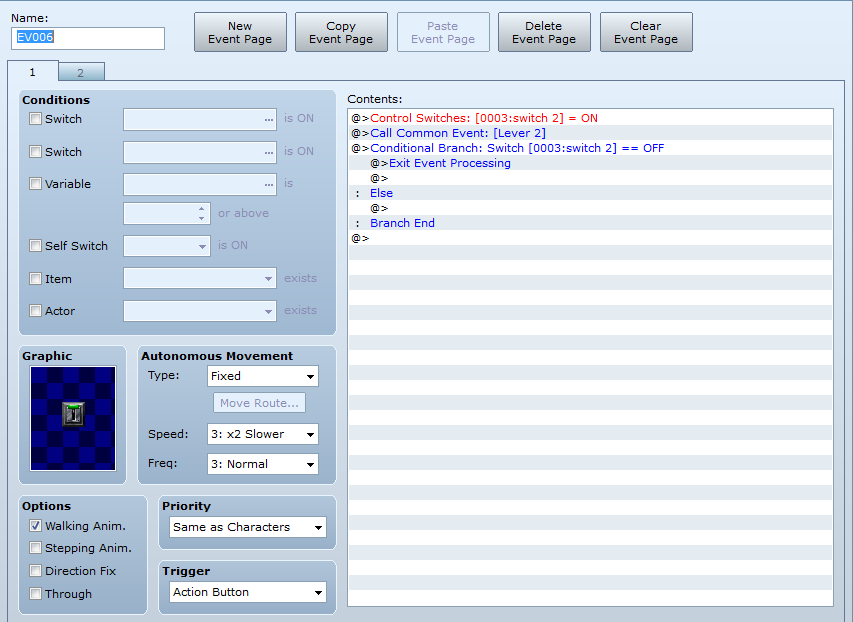 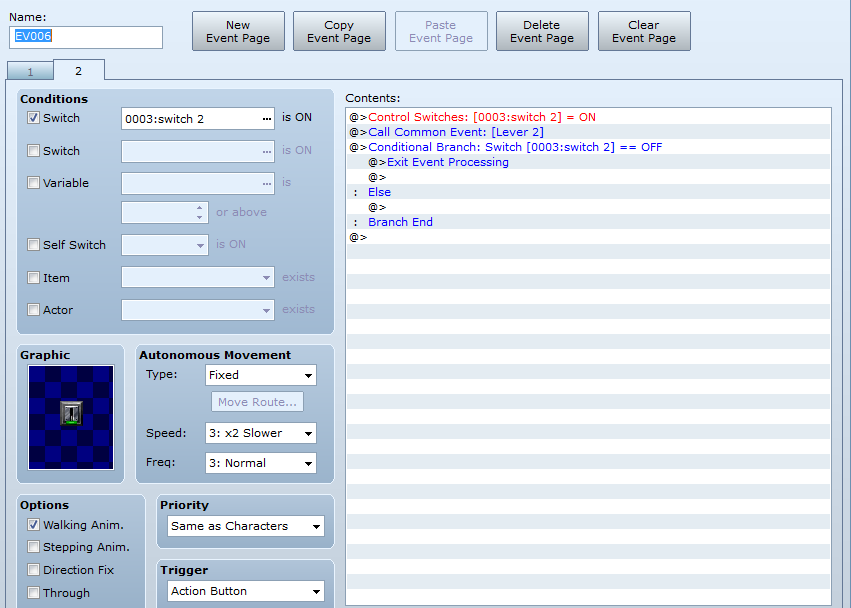 No, not at all. Way too complicated.

Sprite is lever in "off" position.

Control Switches: [0001: Lever 1] = ONCall Common Event: [0001: Check Lever Positions]Page 2Condition is Switch 1 is ON (this is in the PAGE CONDITIONS section - above the sprite - NOT a Conditional Branch in the event command list)

Sprite is lever in "on" position.

Awesome I think I've got it I'll post screenshots again. 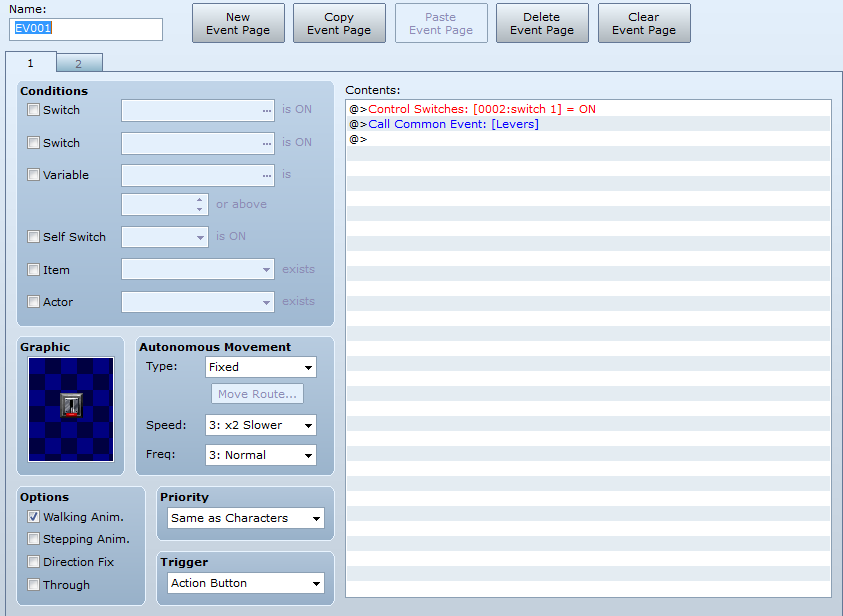 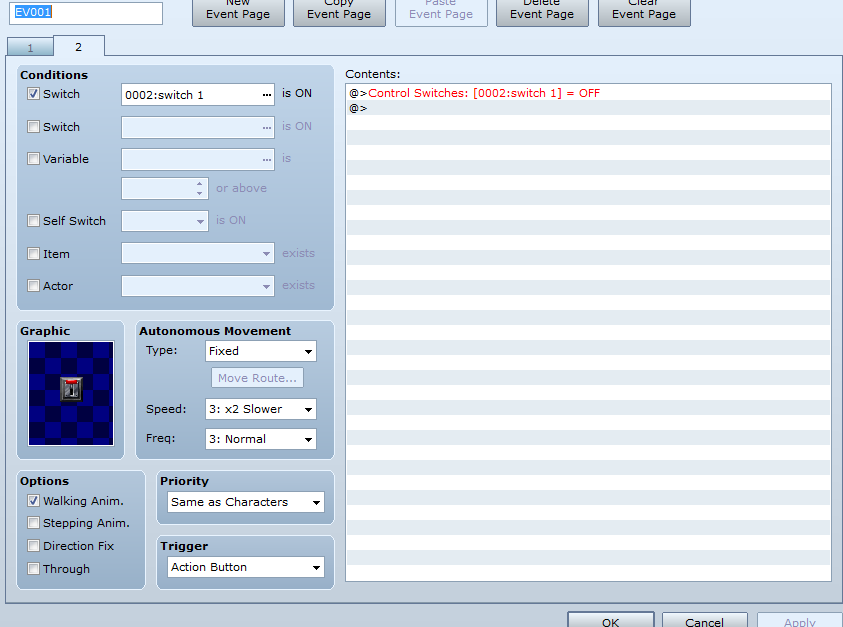 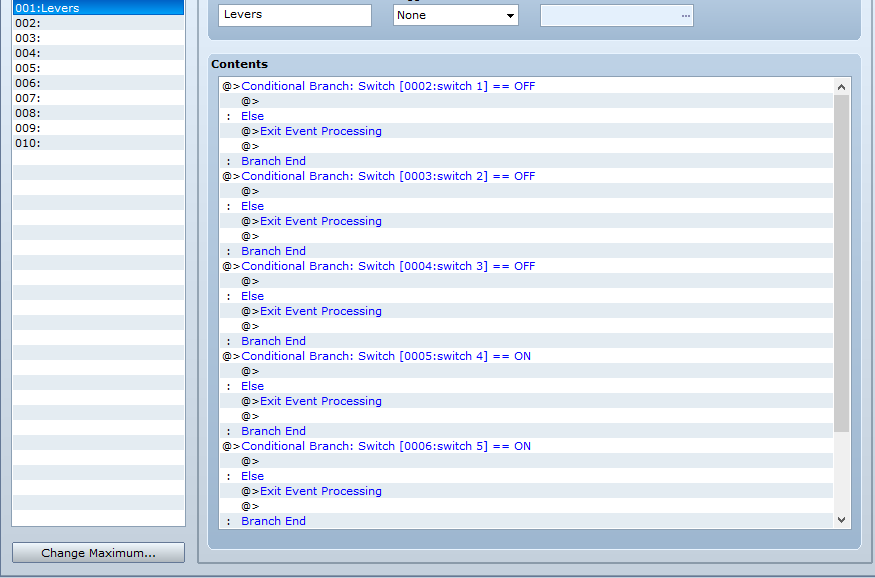 I can't tell if those are correct or not as even if they are, I don't know how to connect them to in

I don't mean to push it but would you know how? 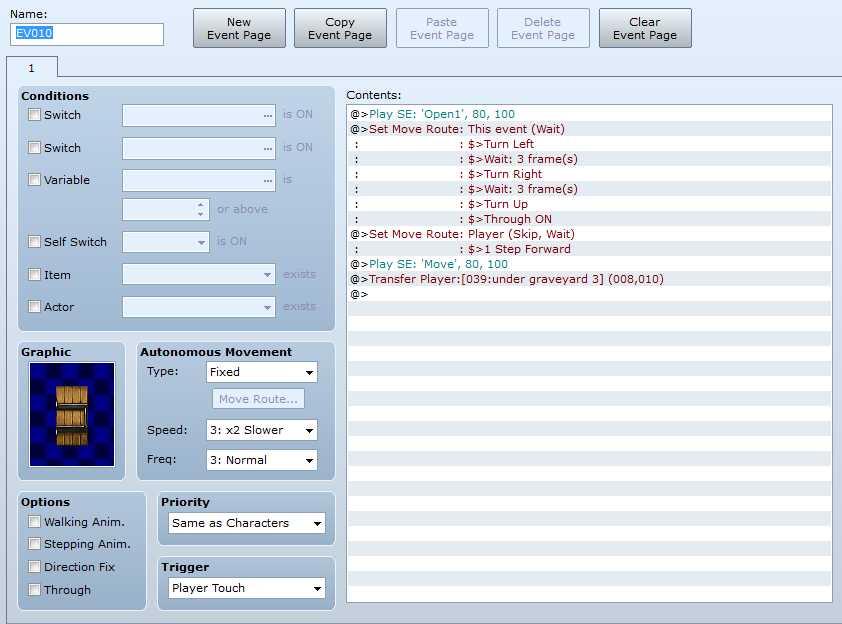 Then, the door will become open when the Switch "Puzzle Door Solved" is ON.

The trick here is events always execute their event pages from right to left.  The first page which matches the condition executes.  The event then does not execute any other pages.

I didn't have any ELSE statements in my common event. You can get rid of them by unchecking the box on the Conditional Branch. The way you have it, you've got the Exit Event Processing in the ELSE statement, for when the condition is false, not when the condition is true. So your conditions for opening the door would be the exact opposite of mine.
You must log in or register to reply here.
Share:
Facebook Twitter Reddit Pinterest Tumblr WhatsApp Email Link

EuphemiaArtoria
Finally finished my first big game since joining the forums! Please check out Petal Knights! https://forums.rpgmakerweb.com/index.php?threads/petal-knights-playable-now.117898/
Today at 4:46 AM •••