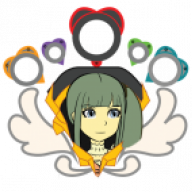 THIS WILL BE UPDATED

You are welcome to volunteer to further test the game, and let us know of bugs, you'll be credited.
Last edited by a moderator: Jun 30, 2014

It says this file is malware and a virus can you fix it plz?

We've tested and scanned the file on three different computers, there seems nothing to be wrong with it. Can you post exactly what you are getting? It could just be a false positive.

Either way, we are uploading a new file post scan just to make sure.

Okay, I got stuck in the Art Room. Father's supposed to be there, but he's not, so I don't know how to get the story moving :/

Inside the art room as you go in to ur right theres a seat. Theres supposed to be a game sign next to that chair that is facing what we made to look as a giant canvas. (Its using the table tiles) so in other words just talk to the white area after the pink seat.

If nothing happens let me know.

Oh my, I just finished this and it's brilliant, well conceived, beautifully portrayed, both in visuals and mostly characterisation (there was one that didn't ring true to me), I don't know why this doesn't have more attention. There were a couple of glitches that I posted over on the game page on RMN. I'd reiterate them here except I put in a couple of screen shots and it makes no sense to reinvent the wheel. Overall, I thoughtfully enjoyed this game, and the 90 minutes I spent unravelling  the mystery left me wanting more.

You need to report Game.exe as a false positive to the appropriate anti-virus programs (i.e. Norton) if you're having that issue. Downloading to play...

Also errr why did I randomly go Game Over when I went left when the snow man told me to go left? <_<

edit: Oh, alright, because the scarecrow told me not to listen. I suggest adding an auto save or ANY kind of save function for that matter.

Also I have no idea how to solve the first "puzzle" with the light orbs as I'm not given any clues or direction...
Last edited by a moderator: Jul 17, 2014

Cinnamon said:
Also I have no idea how to solve the first "puzzle" with the light orbs as I'm not given any clues or direction...
Click to expand...

The coloured orbs, where it talks about the mirror effect? Basically just mirror the first image of orbs you see.
Last edited by a moderator: Jul 18, 2014

I don’t want to be an absolute destroyer, so I’ll simply state what I think is wrong with the design:
*Navigation is very shaky. Entrances are hard to spot, windows have visual clues but DOORS do not.
*Mapping needs work, especially conveying where the exits are (block all the screen edges that are NOT an exit point).
*Who are these people and why should I care? All I could figure out is that I’m sick. My father makes statues and I’m supposed to have a good voice (didn’t sound all that amazing to me but hey).
*No player ever wants to be stuck on slow walking speed. Enable the dashing. I don’t care how sickly she is, it just turns players away.
*Do NOT change the rules of how the game operates midway. If I can’t go over the top of the towers at first, don’t change it later.
*Dialog feels too long and wordy for what’s going on (as it’s not particularly engaging).
*Player guidance is weird. I had assumed I had to find a lamp (hey two rooms were dark and told me to, how was I supposed to know?) but instead I had to go to bed? This would be easy to fix with eventing, such as making the character refuse to go into the dark rooms and reminding us she should head to bed, or even triggering the event automatically when entering her room.

I’ll be honest: this game has too many bad choices (most of which I think are simply from inexperience, so don’t take it too hard) to actually know what’s going on. I don’t know what the plot is, who the characters are, what the goal is supposed to be, why is my manor so busted up…I don’t think I can even speculate at what the game is all ABOUT. I had assumed it was about light and darkness from the title, but the only thing I had time to see was an odd dream.
It feels like this game is only an early prototype. Too many things feel too raw and unpolished. All the points I stated above are a good way to start and at least get the most unappealing stuff out of the way. Good luck.


i love the lighting and shadow effects! its awesome how the shadow actually moves a bit tho
i don't know how realistic that is

when you enter rooms the lighting effect is delayed a bit. that hurts the immersion

once you get into the east area of the manor. you really need to put a save point that's quick to find.

whats with the staff lobby??? i keep freezing. i cant move every couple of steps and theres a monster in there to make it worse

i was getting a lighting effect crash when the giant spider attacked me. then it just stopped

those doorways/windows are so misleading! should remove them.

General-Dropped 2 hours in (could not progress anymore)

This game had potential to be something and i say had because it seems the developer went awol...


hopefully at some point he comes back and improves this...still its a good experience i would recommend.


has flaws but worth playing


i tried using the clue and just ignoring it and interacting with everything i can find. to no avail  and i re checked everything at least 3 times. sadly i am out of ideas.


when your in the dream world there is a room with 4 mirrors and a gate up top.i am not sure if its the game programming or my pc is too weak?

Don't you have al Walkthrough or something please?


I'm in the Secret Garden and need to run away without killing.

I love the game so far, and had absolutely no trouble solving it so far. It's so well made besides slight grammatical errors and spelling but... I need a walkthrough or guidance for fighting the boss monster in the garden... what do I do with the shining mirrors? How do I defeat it???
You must log in or register to reply here.
Share:
Facebook Twitter Reddit Pinterest Tumblr WhatsApp Email Link

Oscar92player
If there are any mods or admins online, could you please see about the re-translation pages for RPG Maker MV? They are all down
Today at 6:08 AM •••

The Mighty Palm
Werewolf cons: you lose control of yourself once a month and could accidentally kill your friends. Vampire cons: no garlic bread. The choice is simple. Werewolf for sure.
Today at 5:11 AM •••

bgillisp
2 huge market drops in 2 days. So glad I sold my non-dividend stocks about 2 weeks ago. And if the dividend ones drop heavily, hey more cheap stocks for me!
Today at 4:12 AM •••