Problem with delayed skill/skill that activates upon state running out.

I am trying to create a skill that has the user fly up into the air for 1 turn before going down and striking the opponent, think the Fly/Dig move from pokemon. It´s based on the Dragoon Jump skill from Yanfly.

this is the first skill that then applies the following state

which then leads into the second skill

However, for some reason, the skill activates twice, once simply playing the normal character swing while causing the target damage, and then a second time actually moving over to the target, striking them, and moving back to the original position. Does anybody know why this may happen?

Do you have the state setup right, try increasing it by 1 turn duration.

glaphen said:
Do you have the state setup right, try increasing it by 1 turn duration.
Click to expand...

Yes, I have tried to do this. Currently it´s at 3 turns ninstead and the exact same issue still arises.

Captain_Joshua said:
Yes, I have tried to do this. Currently it´s at 3 turns ninstead and the exact same issue still arises.
Click to expand...

It's set up like this with the cannot move, ect 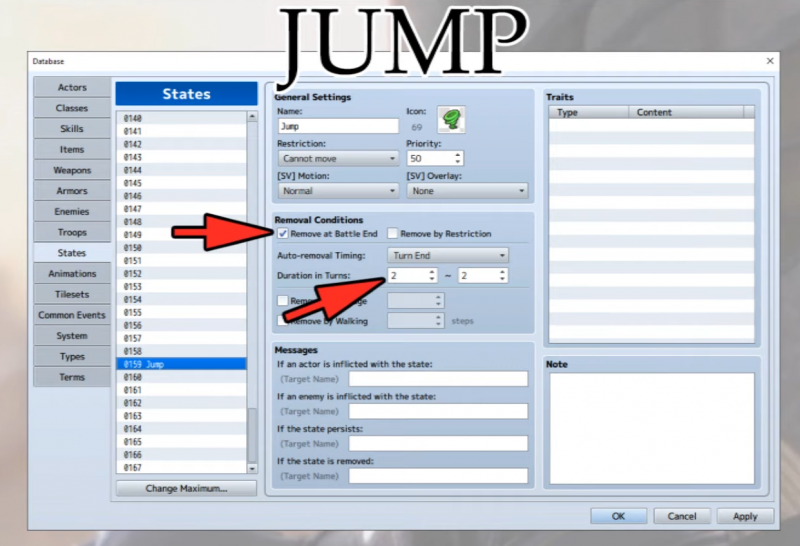 If not, does it work with Olivias battle system off, if it does probably problem with Olivias, I know I can't use the code in Yanflys own CTB.

Yes, the problem does seem to be Olivias plugin. I will try to figure out a way to fix that problem myself, there is seemingly no problem with the actual code since it´s working fine with the base battle system.
You must log in or register to reply here.
Share:
Facebook Twitter Reddit Pinterest Tumblr WhatsApp Email Link

Citali
How you feel about font and dialogue box changing for every main character while the minor cast and regular npc get their own styles? Too much?
1 minute ago •••

TheGentlemanLoser
Just found an obviously custom effect (i.e. edited by me) in my resources>sounds folder called "rip jaw off". Dear Lord what is wrong with me as a person that at some point I needed a sound *specifically* for THAT??
(...rhetorical question.)
48 minutes ago •••