Problems with day/night cycle and tinting a dungeon

EDIT I basically already know what I did wrong. The parallel process in the dungeon is overwriting the one telling it to change on the way out. Just make the one on the way in do the tint. Also, call the transition common event on all my indoor-going-outdoor transfer events. Got it. Leaving it here in case anyone else does this to themselves.
EDIT AGAIN: Also, important to make the tint happen AFTER the transfer in the event order.
EDIT YET AGAIN: Nope, it needs to happen before if you're walking into a parallel event place. Put in a fadeout screen before the tint and a fadein screen after the event to avoid a jarring 1 frame tint blip

Basically I have a day/night common event, a parallel process that runs in outdoor locations to transition between the two with a screen tint, and a second common event that does the tinting immediately that I put on the event for exiting the dungeon I'm working on. Here's my stuff:
The day/night cycle 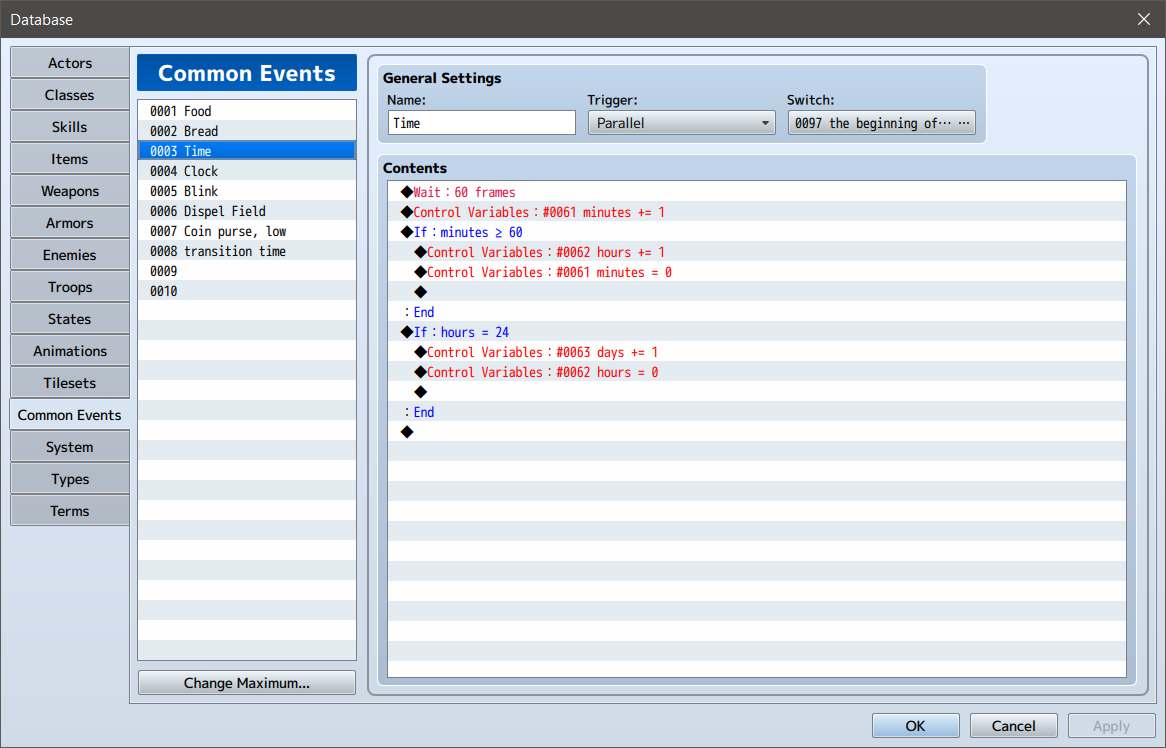 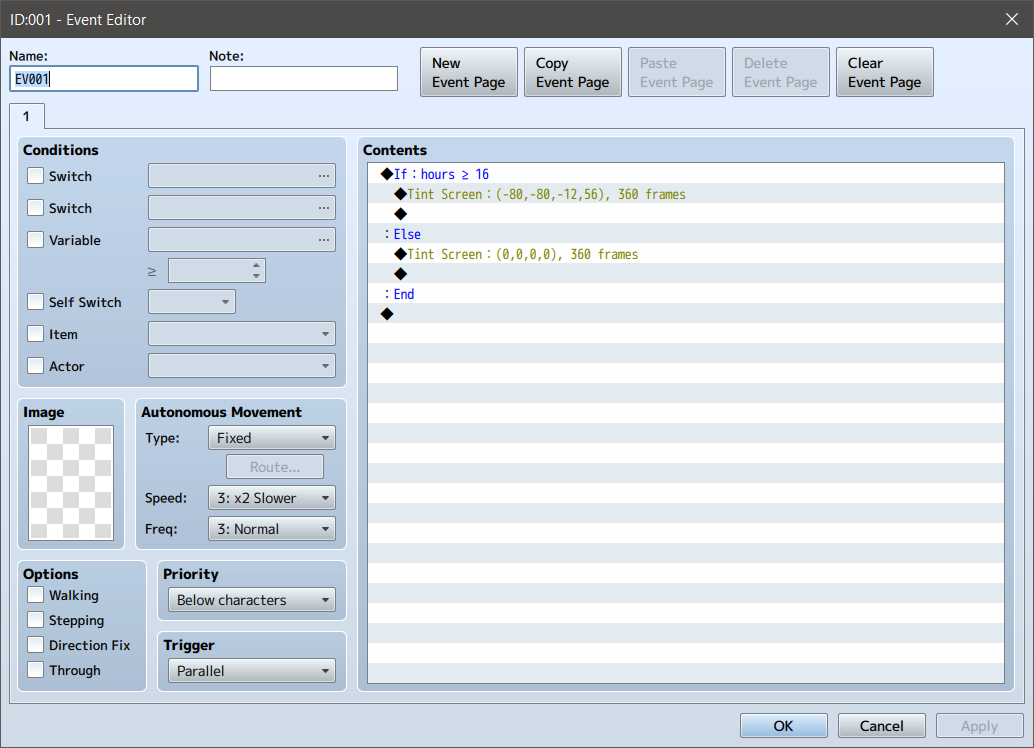 The way out of the dungeon 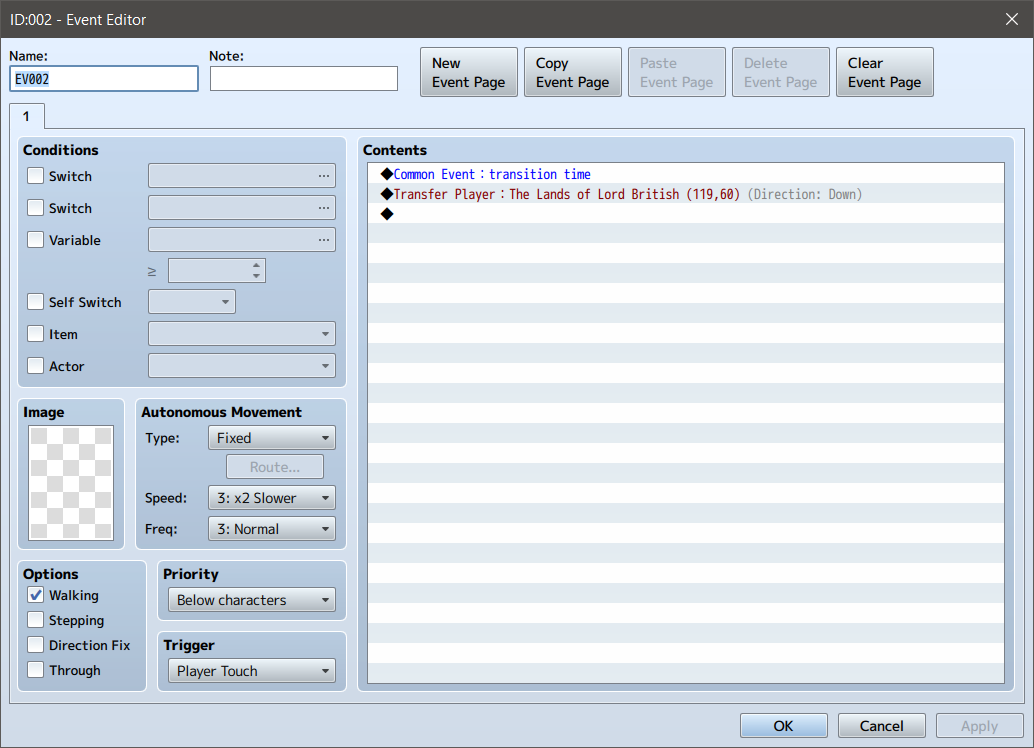 The common event it's referencing. 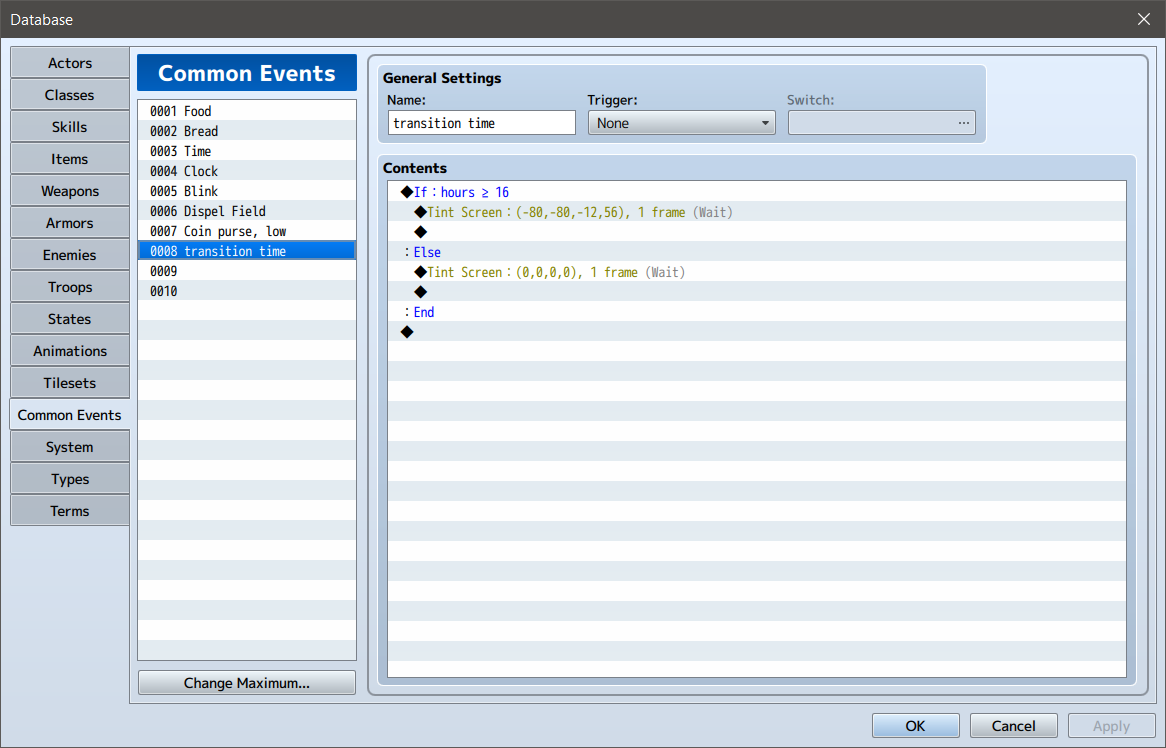 When I walk out of the dungeon, it stays dark and then slowly tints back to normal over the 360 frames, even though I swear I'm telling it to readjust the tint before I walk outside. What am I doing wrong?
Last edited: May 13, 2021

Hello again!
Turn off the switch when transferring to a dungeon, then change the tint screen.

Dev_With_Coffee said:
Hello again!
Turn off the switch when transferring to a dungeon, then change the tint screen.
Click to expand...

I'm pretty sure that would break the time of day while I'm in the dungeon. I want time to keep passing. I've got it sorted now, it was one of those "why won't this work!? I need help!" and then 12 seconds later it clicked in my brain and I solved it.

Make separate events, one that is just the clock with its own switch and the other that is to change the tone of the screen in outdoor locations.
This way it is easy to even affect internal windows of the houses.

coucassi
It's a common thing to forget eating &drinking while you are working concentrated, right?
If I had discovered RPG-Maker before moving together with my girlfriend, I'd have died of dehydration a long time ago.
18 minutes ago •••
Ami
trying to change my picture & got screwed up...
Today at 6:46 PM •••

Richard John S
I've been busy working on my next music pack, and I've also been busy composing some personal compositions. Depending on the type of mood and setting, sometimes I just really love the sound of music created in lofi mono. It has its charm.
Today at 6:44 PM •••

Sir_Vinny
Haven't used this website in so long, hope everyone here have a good day! Lately I've been crafting a dnd world, so I haven't got the time to use RPG maker sadly enough.
Today at 6:35 PM •••