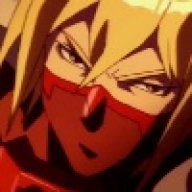 And by tile window I mean on the left side of your "map" where all the tiles are.

I've also downloaded some tiles online and when I upload it, it's all fine... However, when I put it into

a spot to use it only half of them appear and the other half is cut off. I don't know if that's because the

picture it too big - but it's a tile set that many others have downloaded so I'm assuming it's not.

Please help me figure this out. I've looked everywhere (which makes me think you can't) But all the

same, if I could get the half of the tiles appearing problem fixed I'd be happy.

OK, we need some clarifications:


Your profile says you're using Ace, and this is in the Ace support area - but the screenshot look like it was done in XP.


That is a big difference, because the tilesets are working entirely different on both.


In ace, you have six different, fixed tilesheet formats - you can only replace tiles in them, you cannot increase their size.


And each tilesheet need to go into the slot it is intended for, if you place them in the wrong slot (for example placing a tilesheet made for the B- to E-slots into any of the A#-Slots) then they will be cut off and not work properly.


In XP, you can increas the size of tilesheets vertically, but I don't know if there are specific requirements for doing that.


In both cases, the tilesheets need to be set for the tileset in the database.


So what exactly are you trying to do, and what program do you want to use the tileset in?

Sorry about that. I actually just snapped a image off of google to highlight my issue.

I'm using Windows 7 myself. I was just too dumb to take a screenshot... The button

wasn't working on my keyboard.

I'm pretty much trying to re-size the tile window in the left. It's a tad small for me, and after

a while looking at the fine small boxes goes to your head. I've got my Tilesets online and

they're loaded into RPG Maker VX Ace. I'll try to put them into other boxes. I thought I

tried them all, I may've missed one. The obvious ones it shouldn't be in made them all

scattered and compact which was expected. But I tried the other ones and it would

basically cut off half of the page. I'll attach what I've uploaded.

If you look left in the picture I attached previously, I was wondering if that peticular window

for Tiles could be enlarged (which you say can't except on XP vertically) but what about Win7?

I've had no problem putting them in the Database though. Everything's loaded perfectly, apart

from that small issue with them being cut off. I'll see if I missed one, and thanks for replying.

I was talking about RPG Maker XP, NOT Windows XP, your Windows-Version doesn't affect anything in tiles.


And the problem with the tilesheets you've shown above is that those look like tilesheets for parallax mapping, they CAN'T be used as RM-Editor Tilesheets in the regular way.


Parallax Tiles are used when you create the map in GIMP or Photoshop as a picture, and then load that picture as a background parallax into the editor.

Ooooh okay. Back to what I said originally, I might be ******ed. XD I got this yesterday on Sale, and I've had my

eye on it for a while before that. I have already used many of the items.. The only problem with that is that they

look really good compared to the stock terrain and items. Hmmm. Well knowing that, I may perhaps just get into

this parallax imaging and just import it into the game.

What would you recommend for a beginner, GIMP or Photoshop? And when you import the parallax pictures

into RPG Maker, can you set them like you would regular tiles, IE, Passable Objects, Eventing, Etc?

Thanks for replying to me btw. I figured I was just being stupid. The other thing I was going to do was split the

image into 3 parts and just use them all in different slots to be able to use them. But making parallax ones

and importing looks more my style and a bit more advances. Lemme know! Thanks.

Photoshop if you can pay for it - GIMP is free, but (in my opinion) isn't as easy to use.


Search this forum for parallax mapping or overlay mapping, there are several tutorials available (DON'T try to search this on Google, as parallax has a different meaning outside the RM community).


You need to use invisible tiles to set passability when using a parallax image as a map, because by default a background image has no passability options. Depending on map size and a few other things, you might need a parallax- or overlay-script. Those give you even more options in mapping, but more options is also more work (for a map that often looks a lot better).


If you don't know RM, I suggest you follow the link in my signature and go through that before deciding what mapping you want to use.


There are different ways to do almost everything in the RPG-Makers, and it depends on your skills and your game ideas to see which way would be the best, so take some time to learn the basics before deciding how to make your game.

As for your original question, I don't believe there is any way to resize the tile window area.

As to Gimp or Photoshop - if you are not used to either and don't want to pay for Photoshop, I'd definitely go with Gimp. I use it for all of my needs and when I tried out a trial of Photoshop, it was so confusing. So I think which is "harder" really depends on what you are used to using. Gimp can do a lot, especially for basic editing things for RM.

Another option for Cel's tiles are to configure them into tilesets using Gimp or Photoshop. Then you can import them and use them properly in Ace.

zerobeat032
I realized that I don't talk about my game's plot too much. not that I'm hiding stuff, I just don't know what I should tell people in general that would be important. I know more so what plot points NOT to tell.
27 minutes ago •••

Tai_MT
Have any of you read Sutter Kane?
Today at 7:23 AM •••
jaynightwolf GalacticGod jaynightwolf wrote on GalacticGod's profile.
hello GALACTICGOD I loved your characters especially the super heroes, I am new to this rpg program and I would like to know if you have more characters from DC comics, be they villains or heroes
Today at 6:28 AM •••